As I noted in my review of the first book in this series, The Long Earth, I really like the concept of "The Long Earth". I'm a big fan of parallel world stories but this first novel took a pretty different approach to the material: this wasn't an alternate history story, which can be cool in its own right, but a novel where all the Earths were just sitting there, waiting to be explored, one after another, freely and at any time. It's like Sliders, but without all the dumb sci-fi and "what if" storytelling. 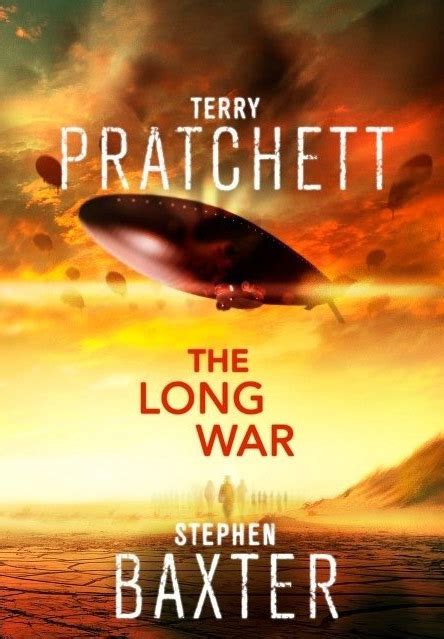 But then we get to The Long War, a novel that takes the basic concept of the first book and then layers on a ton of "what if" storytelling. Frankly, I wasn't impressed. There are parts of this novel I find interesting, sure, but in comparison to the first novel (which itself was pretty uneven) this book is a bit of a mess. It's a long, meandering collection of stories that barely connect, don't really resolve, and have no real climax, all before ending just as something big is about to happen. I want to like these books (and, hell, I've read all five of them), but this second novel in the series makes a case that maybe these stories needed a little more time in the oven before release.

We pick up a few years after the first adventure, with our here, Joshua Valiente, having settled down with peripheral character Helen Green to have a family. They have a son, Dan, and live in new town Hell-Knows-Where, way out in the hundreds of thousands of the "Western" Earths. Their bliss is interrupted, though, by Joshua's sometimes friend and occasional travel companion Sally, the girl that went on the previous adventure with Joshua and Tibetan Monk turned A.I. Lobsang. She comes with a new problem that she needs Joshua's assistance to handle: the Trolls are leaving the Long Earth, disappearing to who knows where (not the town), and without the Trolls the very existence of the Long Earth could be in danger.

How? Well, something something "the Trolls are important to the ecology of the Long Earth". Plus, they're just so useful and the Long Earth is as much the realm of these generally peaceful, always singing, sentient beings. So Joshua is dragged of on this mission which, frankly, wanders along for a while without really going anywhere until the last few chapters of the book. Meanwhile we also have a story of the U.S. Navy's military mission to spread the U.S. "Aegis", the government of the U.S., across the Long Earth, and we have a tale of a Chinese mission to 20 Million East Earth, all to say they did it. It's a lot, and it's hard to say it all amounts to much considering where the book goes and how it all resolves.

Considering the previous book, what worked best there was the exploration of the Long Earth, finding weird worlds and trying to parse their stories as our heroes take a glimpse of them. The strangest, and most interesting, are the world the books call the "Jokers", odd-ducks in the otherwise normal progression of Earths from one to the next. These Earths could be a world that was struck by an asteroid which plunged into a seemingly permanent glacial cycle. Or there was the world where the insects of hundreds of millions of years ago became the dominant species and prevented reptiles or mammals from ever taking over, resulting in a world almost completely covered in bugs. Then, far out to the East, there was a world where the dominant species was tortoises. These are fascinating worlds that the books spends a little time on to give us flavor.

Certainly these worlds are more interesting than the main story, as the tale of Joshua, Sally, and the Trolls is a total dud. A lot of that has to do with the fact that the tale takes a good two-thirds of the novel to finally get going, leaving most of the book between when the problem ("All the trolls are leaving!"), and the actual focus of the story come together. That's way too long to spend not paying attention to what's supposed to be the A-plot of the book, which makes it seems like it really isn't much of a problem at all.

Perhaps we were supposed to get a view of the Long Earth without the Trolls so we could realize how essential they were. Only problem is that we never really get that. For starters, the Trolls are more of a concept than actual characters and we never really get into their heads and view them as actual people, so they're left as big, sweet animals (despite what the book tries to tell us otherwise). And while the Trolls are supposed to be essential to the Long Earth, it seems to go along just fine without them for the length of the novel. Maybe it's supposed to be like Climate Change, something that will eventually be a problem, but that's just too big a concept for a single novel to convey, especially over the course of a month or so in story instead of years or decades.

More interesting is the tale of the U.S. Navy ship U.S.S. Benjamin Franklin. Led by Captain Maggie Kauffman, the ship, and her crew, give off a distinctly Star TrekOriginally conceived as "Wagon Train in Space", Star Trek was released during the height of the Hollywood Western film and TV boom. While the concept CBS originally asked for had a western vibe, it was the smart, intellectual stories set in a future utopia of science and exploration that proved vital to the series' long impact on popular culture., with their mission of peace and exploration. Honestly, I could have read an entire novel about this ship and her crew, and while the book gives us a few short adventures with them it's not nearly enough to qualify as a full story. This part of the book is so much more interesting than anything with Joshua and Sally that I really wish the novel could have been all about this crew instead of anything else we got.

The Chinese mission is more of a dud. We don't spend a lot of time with them and I have to wonder why they were included here. It might have been as setup for later in the series of novels, but as a part of this book it doesn't add a whole lot, at least not from its characters. This is part of the novel where we get to see new and interesting worlds, and I did like that, but at the same time there's no one here to really latch on to, no one to care about, and very little time spent even on the worlds we get to explore. I wanted more from this mission than what we actually got in the novel.

But the biggest issue I have with the story is the hard left turn it takes near the end. The previous book introduced us to Trolls and Elves, two of the sentient, stepping species in the Long Earth. This novel gives us a variant of the Elves, the Kobolds and then drops on us one more species, the Beagles. The Beagles are another sentient species but they decidedly can't step. However, despite this, they have a low opinion of every other species and are outright hostile to everyone. They get tied up in the book because, for some reason (that's never really explained) it's their world that the Trolls move to. Joshua has to go to this world, gets caught up in the machinations, and then has to play "the most dangerous game" with one of the world's hunters. Why? Just because.

Honestly, Joshua's whole story here has barely anything to do with the Trolls (hell, Lobsang just magically shows up and gives a speech "off screen" that someone resolves everything). Meanwhile, the whole part of Joshua getting chased by a wolf-like killer feels like it was directly ripped from author Pratchett's own book, The Fifth Elephant. And, like so much else in the novel, it barely resolves itself and the story just moves on.

You'll note I never actually mention the titular Long War in this review. That's because it's hardly a blip in the story at all. It's comes up, once or twice, is ignored, and then resolves itself in the quickest climax I've ever read. It the novel had been called anything else (maybe "The Long Search" or "The Long Exploration") I'd hardly even remember there was a supposed "war" in this book at all.

In short, this novel is an utter mess. It's neither as interesting nor as funny as the previous book, wandering and meandering all over the place with hardly any interest in exploration or elucidation. It feels like a middle chapter to something more, getting all the setup out of the way so that some grander story can be told. The novels are going to have to start giving us real, meaty stories soon, though, because there's only so much setup and wheel spinning you can do before you lose all steam altogether.