Lost and Wandering in a Maze

Shining in the Darkness

In the past we talked about one of my favorite tactical RPGs, Shining Force. While that game isn't as deep as, say, Final Fantasy Tactics, it's also one of the formative titles of the genre. It's also a hell of a lot of fun to play, and one of the best games ever released on the Sega Genesis. That's not hyperbole as Shining Force (and or it's sequel, depending on which game the writer first encountered) is generally included on any Sega Genesis top-games list. 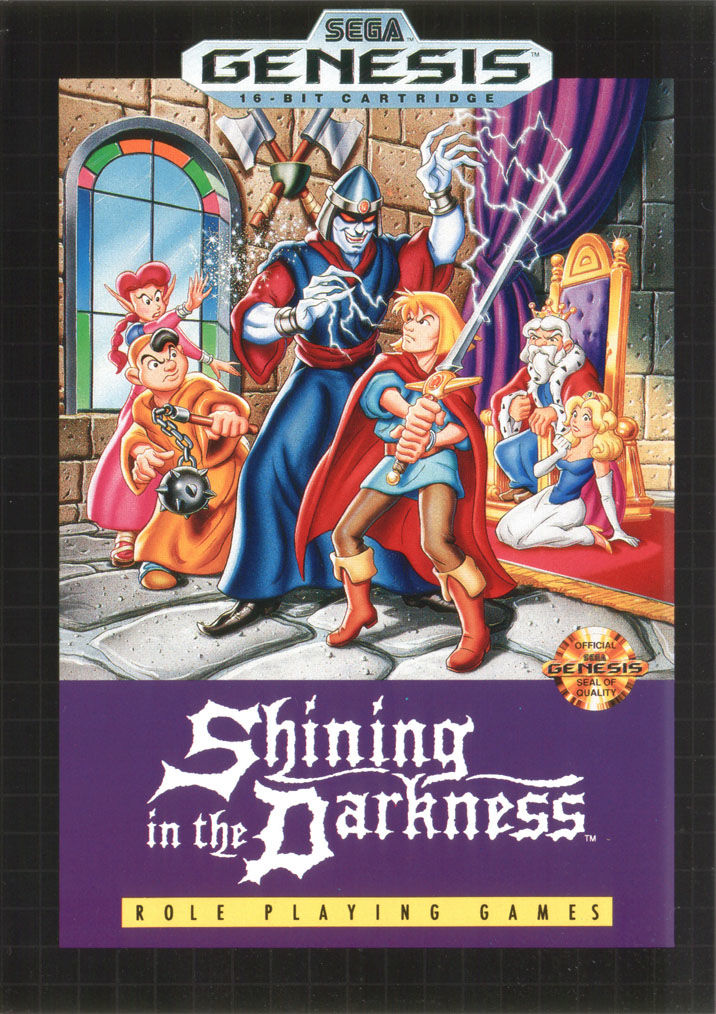 Interestingly, while many fans of the Genesis have experienced the Shining Force titles, the tactical RPG wasn't the first game released in the series. No, that honor belongs to 1991's Shining in the Darkness a very different kind of RPG that had much more in common with the first person dungeon crawlers of the DOC, NES, and Sega Master System era. It's not a bad game for its type, but when compared to what would come out for the Shining series even a year later, it feels absolutely prehistoric.

Set in the Kingdom of Thornwood, our hero (who we can name as we like) is tasked with venturing into the nearby labyrinth. An evil sorcerer, Dark Sol, has kidnapped the king's daughter and locked her deep within the labyrinth. Our hero has to go in, save her, and take on Dark Sol, although getting that far will require a few extra steps along the way. First the hero has to earn the right to get into the labyrinth proper, and that requires completing for challenges that represent the four aspects of being a hero. Oh, and they have to pull together a party, which is where his two companions -- priest Milo and sorcerer Pyra -- come in.

The party will venture into the depths of the labyrinth's basement, finding the items they need to access each of the four trials, then explore those trials to reach the ending shrine where they are granted the grace of that trial. Complete all four and the way up is unlocked. Then the heroes have to find the four Armaments of Light so they are prepared and ready to take on the evil Dark Sol. Only then will they be truly ready to battle the evil and save Thornwood once and for all.

The game is not all that dissimilar to other RPGs of the era. The exploration, as noted, is first-person, which brings to mind dungeon crawlers like Phantasy Star, Shin Megami, and Wizardry. These kinds of dungeon crawlers were actually quite popular in Japan, more so than in the West, and there is a whole slew of these kinds of games overseas that fans of the genre have enjoyed for decades. They may not have been as readily accepted in the West, though, because, honestly, it's hard as hell to navigate these dungeons.

Admittedly, Western audiences are used to a certain kind of RPG: top down, arranged in such a way that you understand the layout of the dungeon as well as your own place within it and where cardinal North is. In a first-person perspective, though, there is no relative "north" nor any idea where you are in the layout of the dungeon map because you can't see the dungeon map at a glance. At least, not in this game -- for whatever reason Shining in the Darkness doesn't have an on-screen persistent map to guide your way. It's a particularly glaring flaw considering how much a map like that aides exploration, which is why even shittier games in the sub-genre (like Swords and Serpents, which I love even if no one else does) included a mini-map. You have to.

Not that there isn't a map at all; there is one, but to access it you have to spend a mana point and cast "View", and the second you close out of the map you have to cast the spell again. It's damnably inconvenient, which only leads to more instances of getting getting lost in the giant, sprawling maps. The maps are, to their credit, huge, with a ton of twists and turns and double-backs all to keep the players guessing and exploring. But with mazes this complicated, the designers really needed to throw the players a bone.

It doesn't help that the mazes don't have many distinguishing features to them. The dungeons of the four trails are all done in the same rocky underground sprites and colors, and you spend half the game in this underground. By the end of that section, you're very tired of the same graphics for the same dungeons sprawling on and on as you explore endless tunnels. The hallways needed more variety, more distinguishing features, more going on in them beyond hallways and monsters to aid the exploration and help keep the game from feeling like such a slog.

And speaking of monsters, they do not help matters. The game has a ridiculously high encounter rate such that sometimes it feels like you can't take two steps without hitting another encounter. The monsters come on and on and on, and you'll spend way more time in battles than actually exploring the mazes. Yes, this is an RPG and battle is part of the experience, but there's a fine line where enough encounters become too many encounters, and Shining in the Darkness leaves that line far back in the dust.

Of course, you will need all those encounters if you're going to get up to the required levels to survive the later encounters and actually have a hope of taking on the bosses in the game. There are two major fiends to fight near the end of the game and you'll have to defeat these guys to continue; some other foes can be run from, but not these two (including, naturally, the end boss). That means there is a hard level you have to shoot for (somewhere around level 50 for your lead hero) and if you don't reach it you likely won't have a chance against the end game. SO you'll spend a lot of time grinding encounters, over and over, to just be strong enough.

I know randomizers have ruined me a little, granting better leveling speed to speed up game play, but even taking that into consideration, leveling up in Shining in the Darkness is ridiculously slow. The issue is just that the required experience for the next level is set very high, so even though experience off monsters scales the higher in to the labyrinth you get, you'll need millions of experience to get up to the levels needed, and that takes a long time to earn no matter how fast and furiously the monsters come at you.

If it sounds like I didn't enjoy my time with Shining in the Darkness, well, that would be true. It's a brutal game that features the barest minimum of a story and one one, very large and endlessly sprawling location to explore. The bones of a solid RPG are buried in this slog, but there's just not enough to keep me coming back. I finished it out of duty, so I could write about it for this site; I was curious about the origins of the Shining series, especially considering the heights we'd reach with the next title, Shining Force. My curiosity was sated, and now, having gone through the game once, I doubt I will ever go back.