The Chronicles of Riddick: Dark Fury

As I've noted before, I'm not a big fan of anime. It takes a lot to get me to watch anything from that genre of animation, usually because it ties into some Western series I actually do like in some way. That's the case with The Chronicles of Riddick: Dark Fury, an anime interquel released to coincide with the second big movie in the franchise, The Chronicles of Riddick. WHether anime or not I was going to watch it simply so I could run the whole series properly. 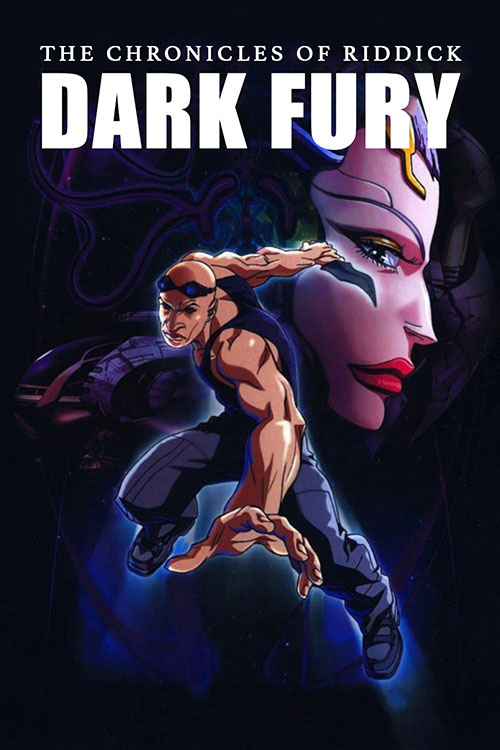 Thing is, a movie like this isn't going to convince me to watch anime. It's very anime in some regards, from the strange bio-mechanical monsters to the odd-ball art style. So many of the tropes of the genre show up here that, were it not a tie into to the Riddick series I would have skipped watching it if given the chance. As it is, having now watched this short film twice, I'm certain I'm never going to watch it again (even if I do run the rest of the series).

Dark Fury (and we're going to use the short name for it throughout the rest of this article) picks up soon after the events of the previous film. We're not really sure exactly how long, it's probably immediately after but the girl, Jack (Rhiana Griffith), mentions they've been through worse scrapes than this which leads me to think there's other tales set between Pitch Black and this short film. Whatever the case, the three crew -- Jack, Imam (Keith David), and of course Riddick (Vin Diesel) -- are floating along in space headed for wherever they want next, when they get spotted by a bounty hunter craft and picked up. Riddick is identified from scans and the ship crew all come heavily armed and capture all three crew.

But the captain of the ship, Antonia Chillingsworth (Tess MacNeille), doesn't want to turn Riddick over to the authorities. No, she's a purveyor in art, deadly art. She wants Riddick to add to her collection of bronzed killers she's collected over the years. To get Riddick to play along she'll kill Imam and Jack if she has to (and likely will regardless). Riddick will have to find a way to save his two crew mates (who he's grown a tad attached to) and escape the ship, carving a bloody path as he goes along.

To be frank, Dark Fury is a slight movie. Released as a direct-to-DVD film to tease the upcoming second big movie, this film is little more than a bonus feature for one of the two films (Pitch Black or Chronicles) given more weight than it's worth. Hell, it feels like an overly tag ending to the previous film, and had it been just attached to the end of Pitch Black and done in live action it might have even felt more natural. Here, as a full "movie" it's too slight to be worth it. 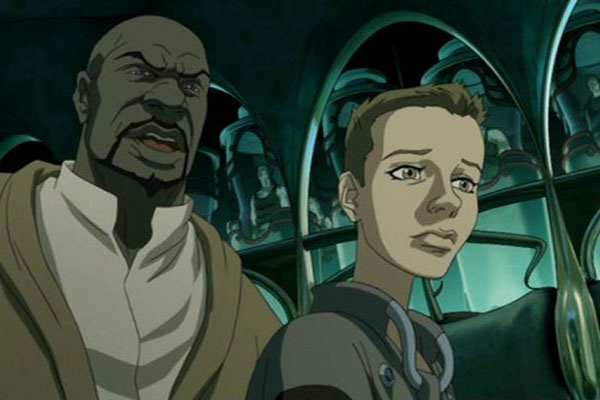 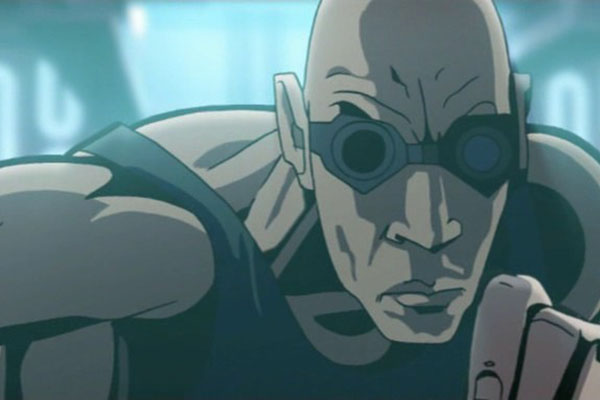 Part of the problem is the 30 minute runtime which only gives the film just long enough to get the setup for the story out of the way before it already has to get into the climax and start resolving everything. We get a villain, Antonia, and her lackey Junner (Roger L. Jackson), but there's no real development too them. Are they bounty hunters? Are they mercs with an army they hire out? We're shown a giant ship, populated with thousands of bodies in tubes but we're not sure to what purpose they're transported or why. We also don't get any back-story for Antonia (or Junner and why he serves the crazy dame); she's just here to act as a foil so Riddick can kill some people and then flee.

For a story like this we just need more. We need the tension to get ramped up, slowly over time, as Riddick is welcomed in, made to fell comfortable, and then steadily things go off the rails. We need at least an hour for a story like this, maybe even feature length, so we can get real development. The villain needs to be fleshed out, we have to come to understand her and then to fear her, and then eventual fight off the ship has to have weight to it. None of that is provided in the super short runtime and it damages the story.

So, instead of a solid plot line to carry us, we're given a quick, slapdash adventure all to say, "how did these characters end up split up so Riddick can stumble on them in the next film." If you don't see this little film in between you aren't left with any questions as the next film answers that (or just brushes it off) so there's no real point to this film. It's just a bit of bloody action, inconsequential story, and we're back where we started at the end of Pitch Black.

And, really, the action isn't that great. The film has a tendency to try and be "arty" and cut away from the bloody good stuff, doing a cut to black before fading in to the aftermath. There's a decent sequence in the middle where Riddick has to fight two strange, bio-mechanical aliens (with no explanation for how these beasts exist in the universe we've seen so far), but the rest o the battles are (like the story itself) slight an inconsequential. It's not enough to carry the film, not enough to justify the existence of this film. 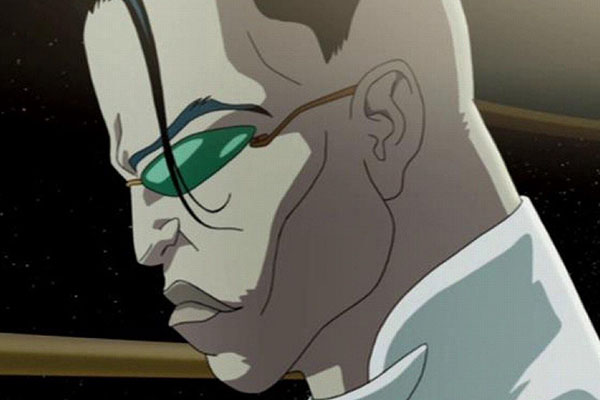 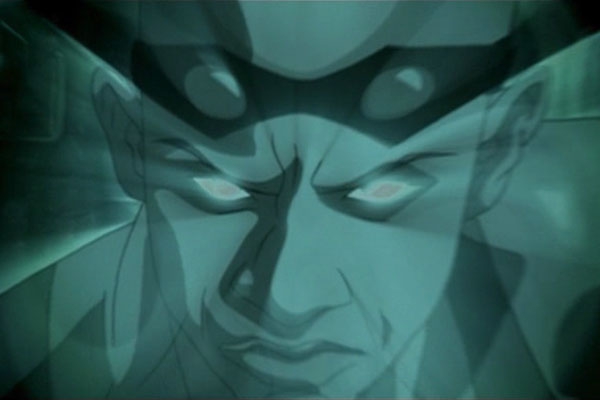 The only good part of the film is Vin Diesel. As we established before, Diesel is a great voice actor, having voice the Iron Giant (and then going to to voice Groot later on). The man really can deliver a solid voice performance and, even on a short film such as this, manages to get all the right performance of the gruff and violent Riddick into the role. Griffith and David are fine in their roles, too, although they aren't given nearly as much to do this time around, and even MacNeille and Jackson are good enough for what they have to do. But, just like in Pitch Black, the film is as watchable at all because of Diesel and his command of the character.

It's certainly not watchable (at least for me) because of the art style. My god I hate this art style. I know it's the trademark style of Peter Chung, creator of Aeon Flux, but I absolutely detest his weird, angular, weirdly constructed style. It didn't work for me on the show and it's absolutely distracting here in a Riddick story. It's just ugly, distractingly so, and gives us one less thing to pay attention to in this short little film.

If this movie had been just a bonus feature (which is basically is in the collected editions of all the films) it would be fine. It's not a great movie but it works as an extra to give fans of Riddick a little more content to watch. But on its own, especially if you were a sucker back in the day and bought this one-off on DVD, the film just doesn't have enough meat to be worth it. It's too short, too shallow, and too ugly to play as anything more than an extended scene on a longer, better film in the series.