Revivals of old properties are all the rage. I don't think there's been a single "classic" (whether actually classic or not) that isn't being looked at for some kind of franchise extension, be it a reboot or a sequel or something. Buffy is probably getting one, that spin-off of Daria is supposedly still happening, and even The Fresh Prince of Bel-Air is supposedly getting a dramatic reboot. Whether or not these properties really need a reboot (or series extension or whatever) is up for debate, but studios have the rights to these works and they want to make money, so as long as Gen-Xers and Gen-Yers (Millennials, I guess) show up, they'll keep cranking out revivals. 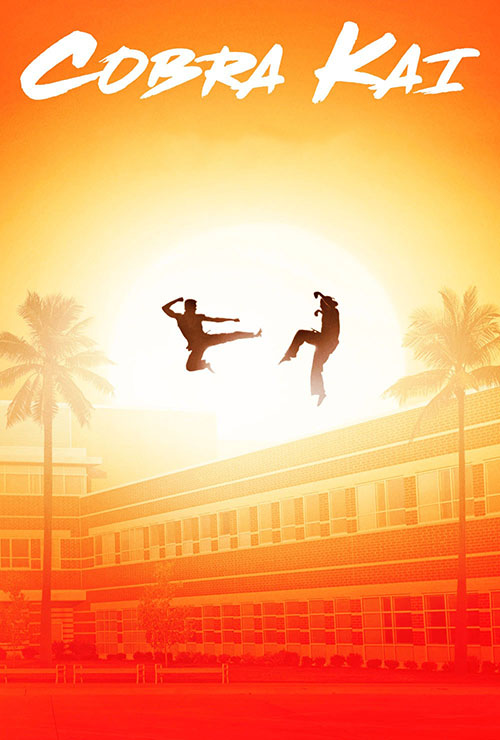 One property I would have expected to stay in the ground, though, was the Karate KidIt's the teen-friendly Rocky riff that defined a generation, with karate, montages, and a lot of power '80s rock, as Daniel LaRusso becomes the Karate Kid. franchise. The one-two punch of the tedious The Karate Kid Part III and the little-loved The Next Karate Kid put the last nails in that coffin. And even though the reboot Karate Kid from 2010 made pretty solid bank at the Box Office, even that film ended up being a one-off that left the future of the franchise in doubt. Did anyone really need or want a continuation of the original film series?

Thing is, the first two films in the series -- The Karate Kid and The Karate Kid Part II -- were actually pretty solid movies and, despite everything I expected, held up surprisingly well. While it's easy to lament the fact that studios keep resurrecting franchises everyone has forgotten, in this particular case the original material for the series was pretty solid and could provide a good base for a continuation. If the story were good, that is.

Happily, I can report that the first season of Cobra Kai is as good as everyone was saying. It was hard to know, with fans of the classic films maybe remembering them with rose-colored glasses, that maybe they came at the new (previously on YouTube Red, now on NetflixOriginally started as a disc-by-mail service, Netflix has grown to be one of the largest media companies in the world (and one of the most valued internet companies as well). With a constant slate of new internet streaming-based programming that updates all the time, Netflix has redefined what it means to watch TV and films (as well as how to do it).) series hopeful it would be good so they could relive the memories of their past. Maybe they weren't being objective. I, however, was never a fan of the movies and really only gave them a shot last week. I was honestly a little mad they weren't terrible because I was gonna enjoy ripping them apart, but instead I found myself sucked in (at least with the first two), enjoying myself more than I wanted, and it's the same with Cobra Kai. The first season is, without hesitation, legitimately good.

As the name should imply, Cobra Kai's first season is told from the perspective of the rival dojo from the first three films. After a montage of the Cobra Kai footage from movies one and two (which I feel was put in just to mock the fact that the first two sequels started with montage recaps) we catch up with Johnny Lawrence (William Zabka), a down on his luck bum that just can't seem to get his life together. His wife, Shannon (Diora Baird), left him years ago, taking their son, Robby (Tanner Buchanan), with her. He's out of work, drinks too much, and really has nothing going for him. But when a kid at the apartment complex, Miguel (Xolo Mariduena) is getting harassed by teenage assholes (in shades of the first film), Johnny steps in. Soon, he's training the kid and restarting the Cobra Kai dojo, as much as a way to make a quick buck as it is to just try and stop his life from sucking. 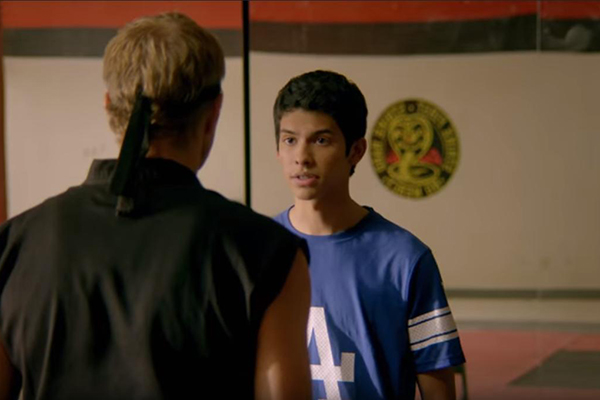 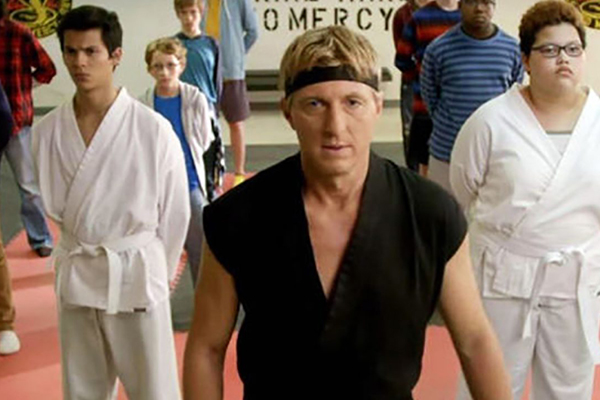 But waiting just around the corner, and always bucking for Johnny to lose, is Daniel LaRusso (Ralph Macchio). Where Johnny's life has gone to shit since the days of the All-Valley tournament, Daniel has been going up, up, up. He owns his own luxury car retailer, has a loving wife, two kids, and a big house, and lives on the rich side of the tracks. But, the one thing in his life he can't let go of is the rivalry with Johnny and the Cobra Kai. Daniel wants nothing more than for Johnny to fail and the Cobra Kai dojo to go away, a name that should have stayed buried in the past. But, instead, the dojo eventually becomes a success, Johnny gets a bunch of students, and Daniel plots ways for his rival to fail. It may be close to 30 years since they last faced each other on the mat, but their animosity is still alive and burning.

What I liked about the early parts of the show was the fact that it juxtaposed Johnny and Daniel, showing them basically in opposite position from where they were in the first movie (where Johnny was the rich teenage brat and Daniel was from the wrong side of the skids). It instantly puts you in a position to care about Johnny, to hope he finds a way to rebuild his life, even as he continues to be, well, kind of a shit-heel. The show plays it as him being clueless, a relic from the 1980s that never really left, and it works well for the character. He may be restarting a dojo that taught bad lessons to bad kids, but he's not a bad person and even as he teaches a new crop of students the old lessons, he finds himself softening and trying to be an actual good role model for them.

Meanwhile, Daniel spends a fair bit of time as the villain of the piece, and that's an interesting perspective for him to be at as well. The hero of the first three movies being cast as the villain of the piece is a very interesting angle to pursue, but as with Johnny the show handles it with wisdom. Daniel is coming from a place of distrust, and while he's mad at the Cobra Kai, and Johnny specifically, it's because they did him dirty back in the day. He hasn't really lost his general niceness, the part that made him a good guy back in the day, he's just seen what that other dojo is capable of and acts out of that fear and distrust. But then he gets a student, Robby (yes, Johnny's kid), and the Daniel we know and like comes back. It's character growth for both the main leads and it works so well here.

It also helps that the show approaches its material with a knowing wink and nod. It knows how corny the old material was and it finds ways to throw little jabs at the past movies -- "how should I wash these windows?" asks Miguel, to which Johnny responds, "who gives a shit?" -- while still retaining a proper sense of reality within the context of the series. It's loving little barbs, enough to entertain and keep the material light and funny. Really, the whole series is quite funny, finding moments to use the humor to lighten moods, to build characters, and to just keep everything moving along at a brisk pace. The craft and care in this story is evident and appreciated. 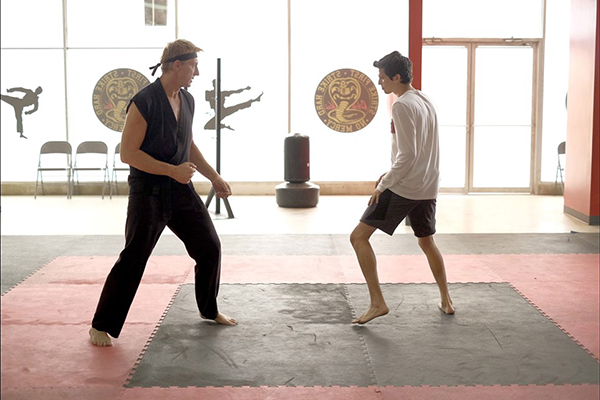 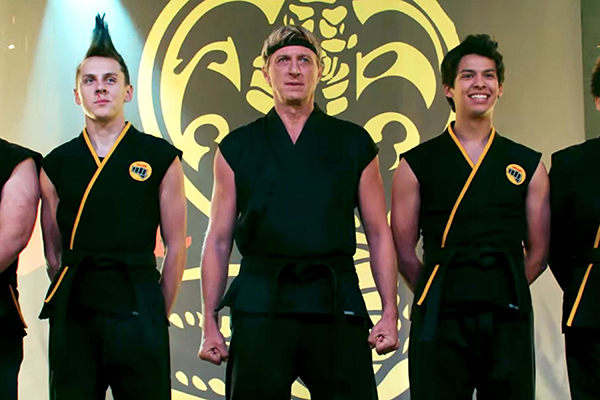 Really, the show puts care into everything it does. It finds a likable kid for Johnny to pair up with, the innately nice Miguel, and shows him building confidence and strength through the teachings. Same goes for many of the other kids that come to the dojo, from the picked on Aisha Robinson (Nichole Brown) to the sad kid with a bit of a lip scar Eli "Hawk" Moskowitz (Jacob Bertrand). In fact, Johnny might have just been too good a teacher as we see his band of Cobra Kai students getting more and more aggressive as he teaches them what he knows. The kind of grow into their villainous roles, a self-fulfilling prophecy of sorts from their name. Meanwhile, Robby goes from a jerk to actually slowly learning and finding peace until the teachings of Daniel (who got them from Miyagi). The series takes pains to parallel the various stories from the films, but put twists in there and reveal new facets to the characters.

I've heard the season season isn't as good, which if that's the case is a little sad. But the way this first season builds and finds ways to grow, expand, and reexamine its characters, goes a long way towards giving my hope for the future of this show. I'm going to give the second season a fair shake, and really hope that it doesn't have growing pains as it moves forward with the characters. But even if it does, we do at least have this one truly great season of the show to enjoy.