I Feel Like This Story Is Trying to Tell Me Something...

The Chronicles of Narnia: The Lion, the Witch, and the Wardrobe (2005)

After the success of Peter Jackson's first Middle-earthCreated by J.R.R Tolkein, Middle-earth is the setting for the author's big sagas, featuring the characters of hobbits, dwarves, elves, and men. trilogy, The Lord of the Rings, everyone wanted in on that sweet, sweet high fantasy action. Any number of films were put into the pipeline but, of course, the series most people were expecting was The Chronicles of Narnia. Considered one of the two great works of high fantasy, along with Tolkien's Middle-earth books, these were seminal works that any fantasy fan had to read. If success could be found with the Lord of the Rings then, naturally, Narnia needed to be visited as well. 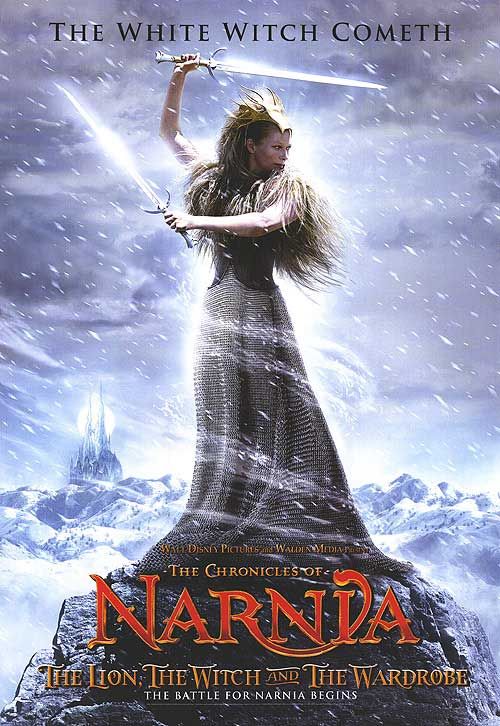 However, crafting a good high fantasy film is no easy feat. It requires the perfect storm of influences, not just a beloved story but a director with a vision, a solid script, great special effects (to create the world), and the right cast to carry everything on screen. If any of those elements are off the whole feature will fall apart. And that is, unfortunately, a major issue with The Chronicles of Narnia: The Lion, the Witch, and the Wardrobe (a film with high hopes of launching an entire seven-movie franchise), as it doesn't get all the elements just right. Something always feels off, whether its the CGI, or the child actors, or the shallow story. There's something missing from this movie that keeps it from launching itself to greatness.

As in the original novel, we're introduced to four kids -- Peter (William Moseley), Susan (Anna Popplewell), Edmund (Skandar Keynes), and Lucy (Georgie Henley) -- as they are sent by their mother out of London (during the time of World War II and the Great Bombing) to live in the countryside with Professor Digory Kirke. While exploring the house and playing games, the youngest, Lucy, finds a wardrobe that somehow has an opening in the back that leads into the magical land of Narnia. The land is eternally covered in snow, as per the command of the icy White Witch (a fabulous Tilda Swinton). While exploring the world Lucy finds a satyr, Mr. Tumnus (James McAvoy), and they become friends. However, soon Tumnus has to send the little girl home because the White Witch wants to capture any human children (as they put it in the story, daughters of Eve and sons of Adam) and Tumnus doesn't want to see Lucy harmed.

Back on Earth, Lucy tells her siblings about Narnia, but they don't initially believe her stories. However, soon they come around and hide in the wardrobe with her, only to find the portal to Narnia and the adventure that awaits. Apparently there's a prophecy that two boys and two girls would show up in Narnia and usher in a new golden age by helping Azlan (Liam Neeson) defeat the White Witch. Who is Azlan? Why only the lion who leads the whole rebellion in Narnia. With the help of the four kids, Azlan might just have a chance to save Narnia once and for all.

Growing up I really enjoyed the Chronicles of Narnia (although, admittedly, I only read through them once). I liked the idea that portals to another world could be hidden anywhere (such as a wardrobe here, but also via other means in the later novels), that there could be a parallel dimensions just waiting for us to explore it, if only we could find it. That's a really neat idea, and to see it populated by cool, talking creatures, to be the fated kid that's supposed to save the world and then gain a throne to rule from, that's just the kind of wish fulfillment a kid can get behind. 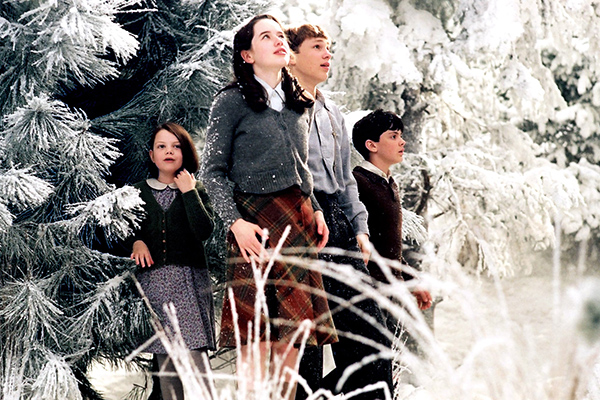 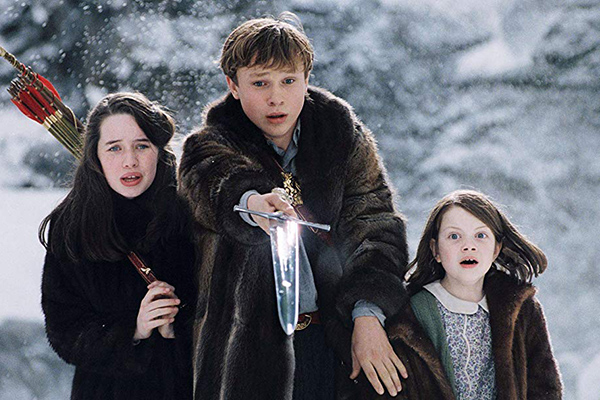 On that front, this 2005 film does deliver. It does a good job of setting up that world, creating something fantastic to utterly stun the kinds. Around every corner could be an adventure, behind every rock a new twist or turn that makes the world of Narnia seem even more fantastic. Every scene introduces something new -- the White Queen can make edible treats from snow, but she can also turn people to stone, and then there's all these fantastic creatures populating this world -- that the story (and the film) can carry itself along just by dropping some new sight or interesting creature every couple of minutes and the audience can enjoy the experience.

That said, the film isn't exactly deep. The story is a basic hero's journey, just with four heroes, and most of the plotting is pretty linear. This is, admittedly, a flaw with the original story as well but it's a flaw that isn't a noticeable with the depth of the prose on the paper. When translated to the screen, flattened out, without all the internal monologue of the characters or the eloquence of the writing, a simple story becomes flat. Sadly, The Lion, the Witch, and the Wardrobe doesn't have a way to take the basics of the story and creating something vivid and interesting.

The problem is that the filmmakers wanted to make the next The Lord of the Rings, but for them that obviously meant, "literally translate every pages to the screen and high fantasy magic will follow." They didn't understand that you have to spice up the adaptation, find ways to make the material more interesting, to give it life. By the third Middle-earth film, The Return of the King, Jackson was moving sections of the story around and creatively riffing on the base material to create cool sights and interesting action. Movies can't just be literal translations of books (that fundamentally can't provide that experience) and a good director knows they have to be creative with the material. Director Andrew Adamson didn't know that (or didn't have the skill to pull it off), so his first Narnia film falls flat.

It doesn't help that the production house working on the special effects turned in a C-grade effort. The team, Rhythm and Hues, simply wasn't up to the task to create the proper blend of live-action and CGI, with characters that look decidedly fake in comparison to the humans standing beside them. They don't move right, nor does their fur look at all real, with everything having this blurry, plasticy feel to it. I lambasted The Hobbit at times for it's bad CGI but everything in that trilogy looks vastly better than the CGI going on here in Narnia. It's just bad. 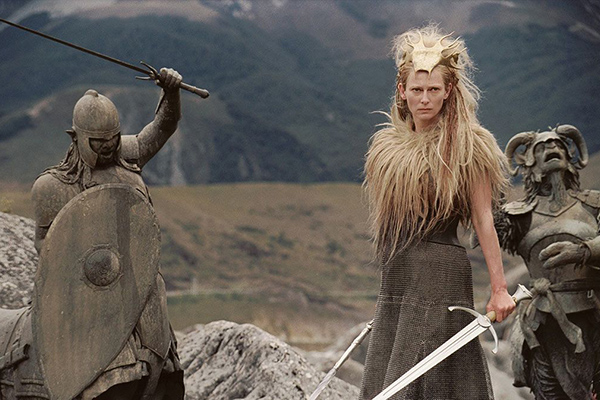 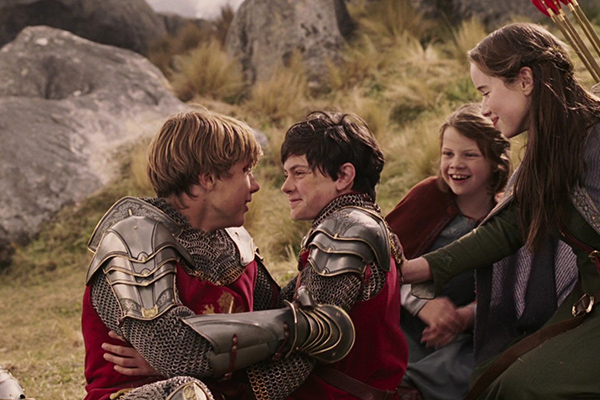 This is a real problem when some of the major characters, like the Beaver, Mr. Tumnus, and of course Azlan all have major roles in the film. But even with the bad CGI these characters still fell more realistic than the child actors. These four seems daunted by the task of acting against so much green screen and CGI, very often getting lost in themselves, unable to create real performances. When they're interacting with each other, or with Swinton or McAvoy, the kids perform admirably. But up against special effects only they come across as utterly flat. When the heroes aren't able to give convincing performances, the whole of the film falls apart.

Of course there's also the elephant (or, should I say, Christian Allegory Lion) in the room. Namely there's the fact that the original story is, really, a not entirely subtle Christian story with high fantasy trappings slapped over it. This wasn't something I picked up the first time I read the book but here, laid out without any subtly or style, it's pretty obvious. Azlan is out Jesus figure, a hero who went away for a while but is not back to "save" the land. In the process he indoctrinates four kids, shows them his way, and then sacrifices himself (going through is own Passion) to absolve them of sins. The he resurrects because he's just and good and that's the rule of the magic here in Narnia.

Whether the religious aspects of the story bother you is, of course, up to you. I did find it distracting, largely because this film has all the subtly and grace of a brick upside the head. A different director probably could have toned down the overtly religious aspects and found a way to make the story a touch more palatable to the non-religious. Certainly, at the very minimum, they wouldn't changed the "Passions sequence" so that monsters and evil creatures weren't standing around watching as stand-ins for the Jewish people from the original Passion. That was a bit much for me. Someone better at direction and composition could have seen the flaw in that sequence at least, that's for sure.

I have to think, really, that the biggest problem with the film is the era it came out. Obviously, getting a multi-movie Chronicles of Narnia production up and running was easier after the success of Lord of the Rings, but it just feels like this film needed more time in the hopper. More time for the special effects tech to improve to craft everything this movies needed to (with the budget the film had for it). A different director wouldn't have hurt, someone that could better pace the film, massage the story, tone down it's worst aspects, and get solid performances out of the kids. This film, scrappy as it was to try and adapt something daunting like The Lion, the Witch, and the Wardrobe, just wasn't up to the task.