My friends know not to bring up the 2001 Planet of the Apes movie with me. I hate this movie so much, mostly because it's an absolutely unnecessary film. The concept of a remake or a continuation of the classic Planet of the ApesAlthough originally started with the 1963 novel, La Planete des singes, it's fair to say that the Apes franchise truly began with the 1968 film that kick started the original Fox film series and has helped tto keep these intelligent primates in the public conciousness for years. series doesn't bother me (as we'll cover when we get to the 2011 reboot series), but the 2001 remake has none of the wit or spark that made the original films so interesting. This is a listless movie, made by a director that clearly didn't care about the source material and just wanted to collect a paycheck. It's awful. 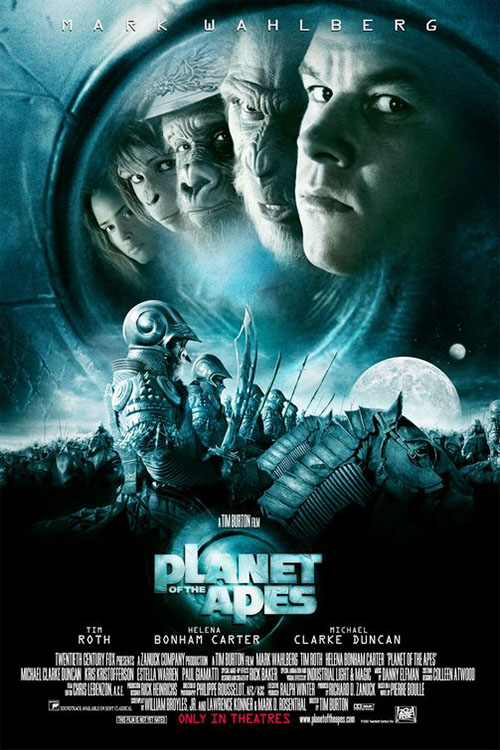 Before I get accused of being a Tim Burton hater, I should make clear that (a) I totally am, and fuck Tim Burton, but also (b) I don't hate all his movies. I actually do rather like the sweet, dark, and very strange Edward Scissorhands, I find his Batman films to be watchable (if not terribly good films about Batman), and I thought his Willy Wonka was enjoyably dumb. When the director is actually interested in the film he's making his enjoyment for the material shows. Sometimes, though, he clearly grows bored with the work-for-hire production he's on and it becomes clear that he's checked out. These are the listless, awful films in his oeuvre, from Sleepy Hollow, to Alice in Wonderland, and, yes, Planet of the Apes.

There are parts of even his worst movies that can be interesting. Burton has a great team of people he works with and even his blandest movies are, generally, visionary in some way. No one really cares about Big Fish for instance, with general agreement that it's one of his lesser films, but it does have lovely, dreamy visuals that make the movie interesting to watch (once). Watching Planet of the Apes, I did have to credit his team for the lovely, sumptuous costuming of the Apes that nicely complimented the wonderful makeup effects. The actors look so ape-like here, with makeup effects that are stunning detailed. It's amazing.

It's just a pity the film wastes all this on an otherwise humdrum, stupid production. Since this is a remake, we have to get a whole new story for the Planet of the Apes, so that's why we open on a space station (in 2029, so we have that to look forward to in 10 years) where Leo Davidson (Marky Mark) is teaching genetically-enhanced chimps how to fly spaceships. Why this is a necessity (aside from putting monkeys into space so we can further the plot eventually) isn't ever explained -- why are apes better for this than just teaching humans to fly spaceships, for example, and why is Marky Mark's Leo teaching these chimps when he's a mean-spirited jerk that loves to taunt the chimps? The opening section of the film makes no sense. But hey, when a chimp flies off course into an anomaly, Marky Mark suits up and flies into it as well to save the chimp, only to lose control of his ship (maybe this is why chimps are flying ships) and crash-lands on the Planet of the Apes.

Marky Mark, being the smart man that he is, is immediately captured by Apes and made into a human slave. He does catch the eye of one Ape, Ari (Helena Bonham Carter), who is sympathetic to the humans (a leader in the human rights community). For whatever reason she takes in Mark and another human female, Daena (Estella Warren), and puts them to work in her home (she may be sympathetic but they are still humans so they have to be slaves). However, Marky figured out how to break out, takes Daena, Ari, Ari's butler Krull (Cary-Hiroyuki Tagawa), and the orang slave trader Limbo (Paul Giamatti) before going on the run. They are pursued by General Thade (Tim Roth), who leads an army of Apes after the humans to crush the rebellion they could potentially cause. And then it all ends in a big, pointless battle between Apes and humans that solves nothing and doesn't even resolve the plot. Such great storytelling. 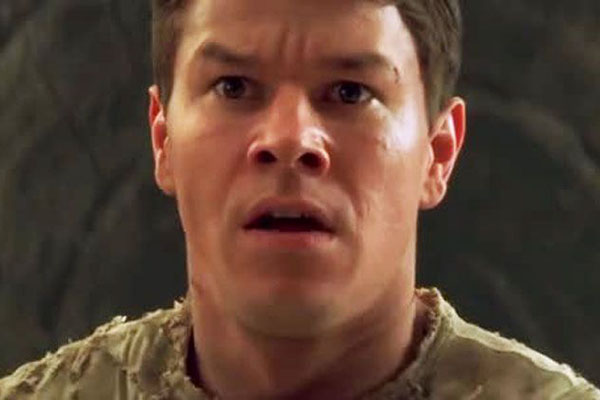 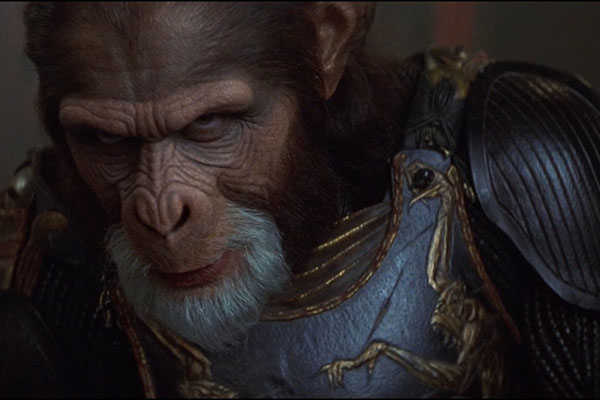 There's a lot to unpack about this movie, none of it good, but let's just start with Marky Mark. Firstly, as if you couldn't already tell, I hate this actor. I've never once enjoyed his performance in any of the movies he's been in, often finding him to be a drag on the production, the worst section of any movie that featured him in the cast. Three Kings is a great movie despite Marky Mark, and I love The Big Hit, and he's the lead in that film, but what I don't pay attention to in that movie is Marky Mark. As in those movies, Wahlberg is a void here, a charismatic-less lump of man flesh given a starring role that demands more than Marky is capable of, i.e. a believable, human performance. Wahlberg is beyond bland, a poor enough presence that despite everyone else working overtime to compensate for the cruddy Bostonian in the lead role, the movie still drags. He's like a particle of anti-acting, destroying all the real acting around him simply by existing.

And there are solid actors trying to play off of him. Helena Bonham Carter is a fantastic actress (and frequent Tim Burton collaborator) who can kill it in any roles she's cast. Her Ari is a sweet, open-hearted, intelligent (chimp) woman who is able to sell a romantic subplot between herself and Wahlberg despite getting nothing back in return from Marky Mark. She's amazing in her role, but she has nothing on Tim Roth who is so deeply into his General Thade you'd think he spent six months living with chimps to get into his method performance for the role. His ticks, his actions, his entire demeanor is that of an angry Ape and you never once see through the performance to the man beneath the makeup. He does such an amazing job that I really wish anyone else was playing the hero role opposite Roth's scenery destroying villain.

That said, all the awesome performances, not only from Carter and Roth but many of the other actors (Michael Clark Duncan, Kris Kristofferson, Paul Giamatti), can't make up for the fact that there's barely any story here. The original Planet of the Apes film was a slow burn movie that built to its surprise, gut-punch twist with an allegorical movie about man's own sins and hubris. It's the story that keeps people coming back, the politically charges story that seems just as relevant now as it did in 1968. Of course, the twist is what people remember, but that's a trick you can only do once. The 2001 remake has neither an engaging story nor a good twist to really make people reevaluate the whole film they just watched. Seeing astronauts land on an alien world, see them spat on and subjected to constant humiliations, only to them learn they've been home the whole time, that's a twist that blows your mind.

What does Apes 2001 have by comparison? Well, first we find out that we're in the future of an alien world and the space station with all the apes crashed there centuries earlier in their search for Marky Mark. That's how the apes end up on the planet. It's an expected closed-loop time travel twist, one you can see coming because closed-loop time travel is baked into this franchise. But then the film has to say, "you know what? This twist isn't big enough!" So somehow Marky Mark flies home but instead of going back to the space station, he crashes on Earth of his own time period only to find it's been taken over by Apes. How? Why? Who cares? It's a stupid twist that wasn't setup by anything we saw before and doesn't actually pay off any of the story beats from the previous two hours. It's like Tim Burton saw the idea for Apes taking over Washington D.C. (maybe from a Kevin Smith comic) and decided, "this is an idea I can steal." 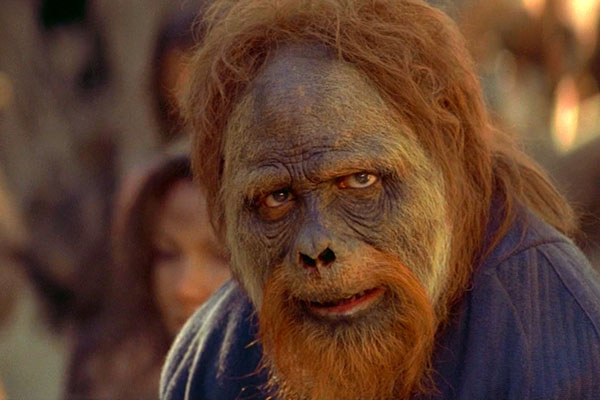 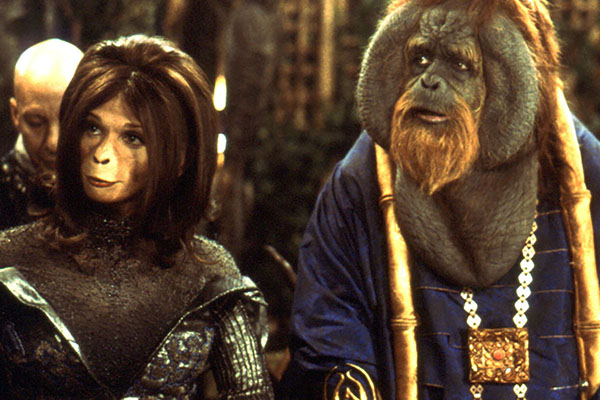 But even without the twists, there's just nothing in the story to make the movie worth watching. Once the humans break free of captivity they go on the run, leading to a long chase story for the middle part of the film. In a normal, good movie this would be where the Apes and humans learn from each other as they travel together, caring and sharing and finding common ground. We don't get that here, though. The bad Apes remain bad, the good Apes stay just as good as they were before, and no one changes or learns anything. Marky Mark remains as smug and annoying as he was at the beginning of the film, so when the movie pulls a John Carter and sends him home, having gone through his hero's journey, you're left asking yourself, "what was the point?" Nothing was learned, nothing was gained, and the slab of meat that is our hero remains an obnoxious douche.

Every time I watch this film I struggle to get through it. It's long (clocking in at two hours for a threadbare plot) it's tedious, and it has absolutely no characters in the film I care about (aside from Roth's Thade and he's the bad guy). Often when this movie is popped on I'll just fall asleep during it because watching nothing is more enjoyable then sitting through this dreck. I would go so far as to say I'd rather watch the Apes TV shows than even watch this film again. I've seen it enough and if I never have to sit through Burton's failed Apes abomination it will be too soon.

In the realm of bad Sci-Fi, I'll sit through Alien 3, The Matrix Revolutions, I'll take a visit to Jurassic World: Fallen Kingdom. When it comes to Burton's film, please stop this Planet of the Apes. I want to get off.