Don Your Swim Gear And Kick Some Tail

There was a time when superhero films weren't big business. Considering Marvel can fart out any film with the Marvel Cinematic UniverseWhen it first began in 2008 with a little film called Iron Man no one suspected the empire that would follow. Superhero movies in the past, especially those not featuring either Batman or Superman, were usually terrible. And yet, Iron Man would lead to a long series of successful films, launching the most successful cinema brand in history: the Marvel Cinematic Universe. brand on it and make $400 Mil at the Box Office, it's odd to think about how, just a little over a decade ago, not every superhero film was given a wide berth. Sure, now anything that isn't MCU-related has to actually win audiences over with the power of its story (one of the few times we can thank COVID for something), but for a good span of 12 years anything with a superhero in it was guaranteed to print money in a stupid and gratuitous fashion. 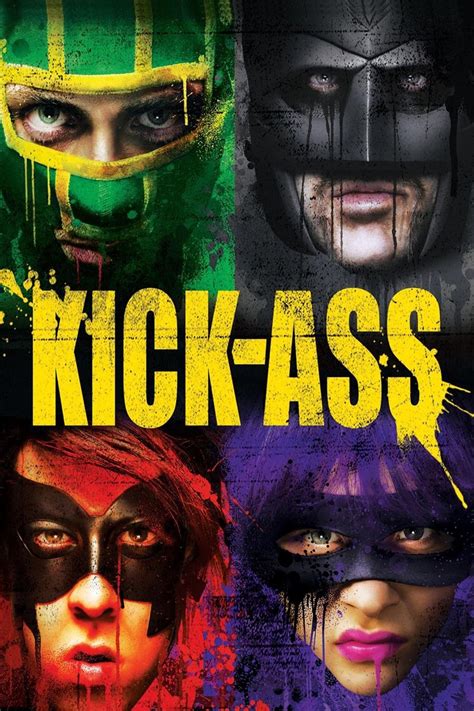 2010 was not a year like that. Although Marvel had some success up to that point, with the well received Iron Man, even their films weren't all money makers. The Incredible Hulk made $264 Mil (despite being terrible), and Captain America: The First Avenger (which was actually pretty good) made $370 Mil. Those numbers are still much better than 2010's Kick-Ass, an indie comic-turned-movie that tried to capitalizing on the suddenly booming superhero hype. It's lackluster $96 Mil take (although great against a budget of only $30 Mil) still wasn't enough to inspire much confidence.

That's not to say that Kick-Ass was a bad film, by any stretch. While it is a bit puerile, and certainly hyper-violent (its R rating likely held it back some at the Box Office), there's a core thread to the film that does work. It manages to craft a superhero story that isn't like the ones being put out by Marvel (or in the DC Extended UniverseStarted as DC Comics' answer to the MCU, the early films in the franchise stumbled out of the gates, often mired in grim-dark storytelling and the rushed need to get this franchise started. Eventually, though, the films began to even out, becoming better as they went along. Still, this franchise has a long way to go before it's true completion for Marvel's universe.), a fresh take against the big, muscle-bound guys airing alongside this scrappy underdog.

If I anything, I think this film simply came out at the wrong time. When it was released superhero movies were still finding their modern feet but Kick-Ass (based on a comic that parodied the concept of superheroes in other comics) feels like its trying to parody a genre still feeling itself out. It's failures are a lot like another superhero parody that never found an audience, Mystery Men -- it knows it wants to parody something but there just wasn't enough material out yet to really make the send-up stick properly.

In the film we find Dave Lizewski (future Quicksilver Aaron Johnson), a bored teen living the life of other bored teens, while he longs for something more. A giant nerd, Dave wonders why no one had ever tried to be a superhero before. It's not hard to get a costume, he reasoned, or patrol around the streets looking to do good. Why couldn't he be a superhero? Well, the first time he really tried it her learned the reason when he got stabbed, mugged, and run over by a car. Left in the hospital for weeks, many of his bones had to be replaced with metal and most of his nerve endings were deadened. In short, he got really fucked up by his own stupidity. 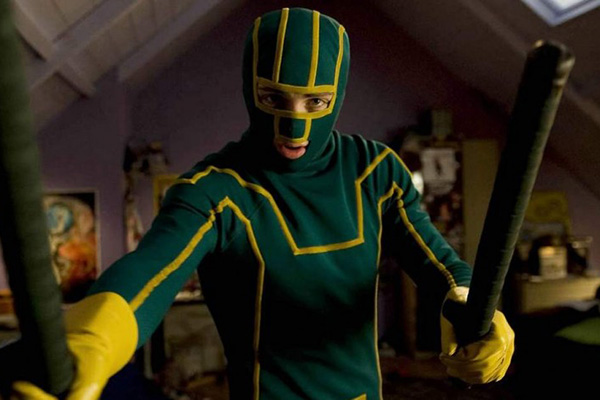 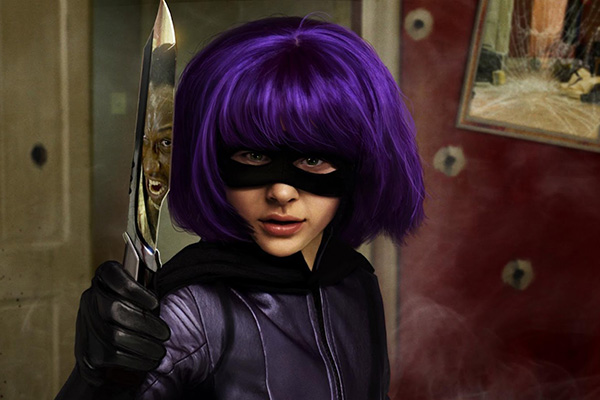 But with sturdier bones and the inability to feel as much pain, Dave was out again soon after getting home, reasoning that he could be a superhero for real this time. His antics, actually saving a dude from three thugs, got him exposure and a lot of Internet likes. This put him on the radar of two real superheros that had been working in the shadows for months: Big Daddy (Nicholas Cage) and Hit-Girl (Chloe Grace Moretz). These two had been waging their own war against a powerful Mafioso, Frank D'Amico (Mark Strong), and Big Daddy and Hit-Girl hoped Kick-Ass could help them. D'Amico, though, wants all the superheroes dead, whatever it takes, which puts the crosshairs not only on Big Daddy and Hit-Girl but Kick-Ass as well.

Kick-Ass is, at its core, the story of an idiot kid getting in over his head while the action ramps up and up around him. Honestly, Kick-Ass is the least important part of his own movie (a trait this movie shares with the comic it's based on). The real stars of the show are Big Daddy and Hit-Girl because, frankly, they kick so much ass. Nick Cage deserves a ton of respect for this role as he throws himself into it with all the gusto he gives to every performance. Here he underplays his weirdest tendencies, instead channeling Adam West through a home 1950s father figure, to make a superhero that is absolutely violent as all hell but will still laugh and talk about getting hot cocoa with marshmallows in it after.

The breakout star of the film is, most assuredly, Moretz. Although this wasn't her first role (she'd played a little kid in a bunch of films from 2005's The Amityville Horror remake to Internet meme 500 Days of Summer), this was her biggest role and the one that put her on the map. Her performance as Mindy McCready / Hit-Girl turns the character into a whirling blade of death with a poppy, Disney Channel smile. It's a crazy juxtaposition between the sides of the character and few other actors, at any age, could have pulled it off. When this film came out there were already rumors of a Hit-Girl film, and while that never came to fruition, you could see why they wanted it.

As for Aaron Johnson (soon to be Aaron Taylor-Johnson after this film), well, he's fine in the role as Dave / Kick-Ass. While I don't think he's particularly special in the role (the fantastic Evan Peters, the other Quicksilver, is also in this movie as one of his friends and he would have been so much better), he does play the every-man role decently well. Kick-Ass is supposed to feel in over his head and, yeah, Johnson was a bit in over his head. It works, I guess, but you can't help but wish they'd gone a slightly different direction with the casting. 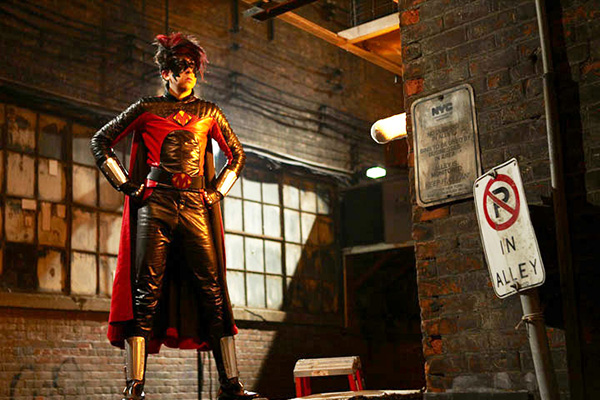 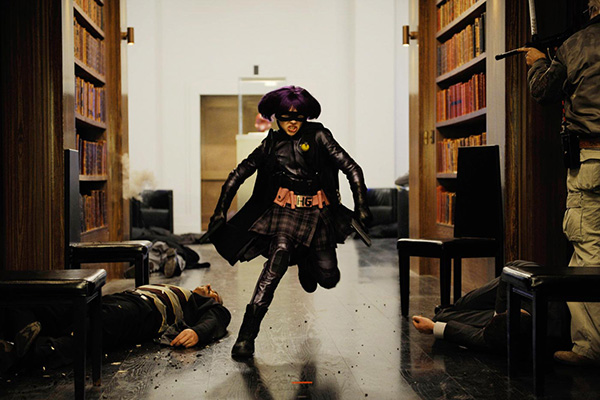 Despite this, though, you can't fault the film when it came to its violence, its humor, and its oddball sensibilities. The film really does have a certain perspective, goofy and gory, but played in such a way that you can't really take it too seriously. Everything about the film crafts a very weird, and very heightened world, giving the movie just the right tone. As people get beat up, and killed, you laugh instead of screaming because the film lets you off the hook so you can just enjoy the carnage.

The film is by no means perfect and could certainly have used better casting for its lead, and maybe a little more tweaking in its overly long script (a few minutes cut off the nearly two-hour runtime would have done wonders for the pace). Even still, the film is no misfire. It's fun, and watchable, but not an instant classic. It just does its job decently and then fades away. There are worse superhero movies out there, but Kick-Ass is, to be sure, a middling effort at best.