I'm as much a fan of deep and immersive games as the next person. I've spent literal days of my life on games like Diablo and Borderlands and have no regrets about it. It's fun to get absorbed in a popular game, honing your skills and getting so good you can no-scope nail a bandit from across the map while quickly dashing to the next rare treasure. There's a satisfying quality to moments like that which keep me playing, fueling the game play loop that keeps me hooked. 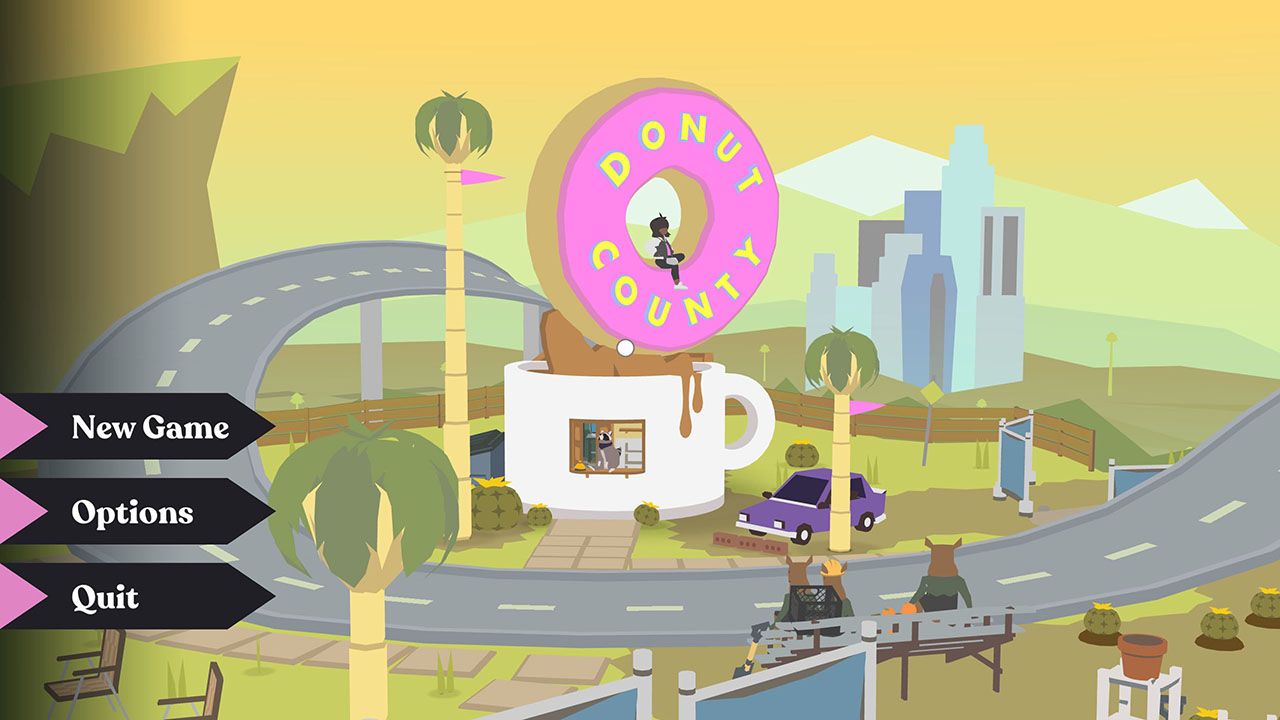 That said, those kinds of games sometimes feel like they're a dime a dozen. How many looter-shooters have we seen in the last decade? Borderlands leeched the looting loop from Diablo, applied it to first-person shooters, and started a new genre. Meanwhile there are so many Diablo clones out there that it's hard for Blizzard to even get their own games in the series out there (not that anyone should feel bad for Activision Blizzard at all; screw those guys). Hell, games as a service, with everything from Battlefront to Avengers is dominating the "hardcore" market thoroughly now, and that all feels so... similar. Get in, run a raid, get out, repeat.

Sometimes it's nice to find something that's different, that doesn't want you to become a hardcore addict just to keep the loop going. Other games, that explore fun mechanics and let the player just chill while playing, might seem "casual" but they also present something new in the world of gaming that is sorely needed. We covered one such game, the delightful and quite different Unpacking, and I'd like to also discuss another such "casual" game: 2018's Donut Country. And, yes, if you have Game Pass then you know that's where I found these titles. While I'm not shilling for Microsoft it was nice to see a diverse selection of games in their monthly subscription service (which I'm still debating if I want to keep it around past its first month).

Donut Country is an odd little game. It starts its story off with its two lead characters, a teenage girl and her best friend who is also a talking raccoon, having a text conversation as they're both on their way to work at Donut Country, the local doughnut joint. As we learn, the raccoon is at level 9 in his delivery app. Once he reaches level 10 he'll get a free omnicopter. His goal through the game is the earn those points by making deliveries. The path to glory is rewarded with a hovering toy helicopter.

Thing is that the raccoon isn't exactly delivering actual doughnuts. Instead, when the pastry delivery begins, a hole appears on the ground at that location. From there the player is tasked with moving the hole around, sucking up tinier objects, making the hole grow bigger and bigger until everything at a given location is sucked up. I've heard the game described as "Katamari-esque" and that seems accurate, although the paces is more sedate, allowing the player time to just chill with the scenery and the music as they find ways to accomplish their task of sucking the entire above world down into the depths below. 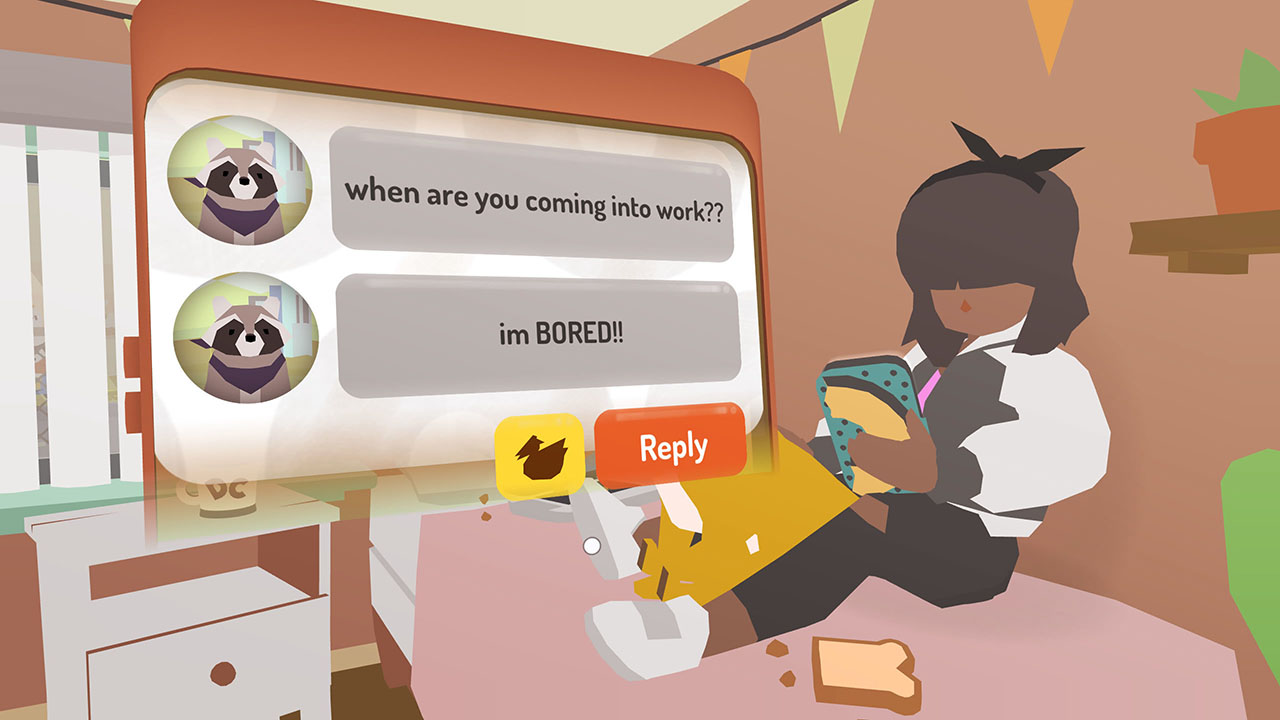 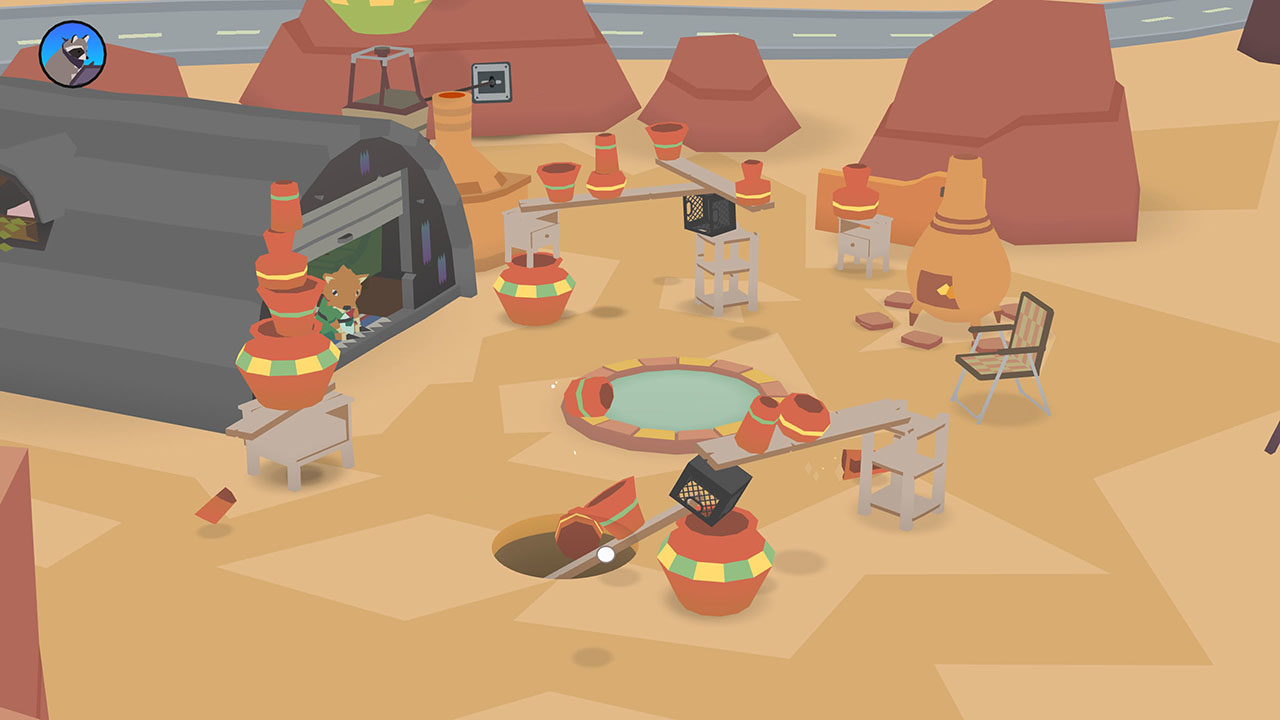 Ah yes, the depths below. That is where most of the story is told. After that opening conversation we then jump forward past all the carnage as we see all the characters from around town sitting 90 feet below the Earth's surface, seemingly trapped forever while the raccoons take over the world above. Between delivery missions we then jump ahead to hear from the characters and learn about each of the denizens of the town. Then it's time to go back and trap someone else underground. You're both destroyer and hero in this game and, well, it's amusingly odd.

You'd probably feel worse about sucking everyone into the underworld if it weren't for the fact that the game is just so chill. It has a light, gentle soundtrack that keeps the game moving along with a bit of zip. Everything is illustrated in a quirk, cel-shaded manner and it all just feels so fun. Ostensibly you're ruining the lives of everyone in town but it's hard to feel bad about it in this quirky and silly game. Plus, no one dies so there's less guilt there (even as you take an active hand in their destruction).

And there's also the fact that while the first two-thirds of the game are absorbed with sucking the town underground, the last act of the game sees the denizens getting their revenge against the evil doughnut corporation, giving the raccoons a taste of their own medicine. That makes sense as this game, with all its little cut-scenes and the emphasis on learning about all the people in town, wants you to care, to get invested in all of them. You may be the destroyer but the game also wants you to become the savior, delivering hot donut justice to the world.

Mechanically Donut County isn't hard. there really is only one primary mechanic -- move your hole with the analog stick and find things that will fall in. Eventually a secondary mechanic is added, a catapult that allows you to spit back out the last item (or two) vertically. This enables further puzzles as the hole gains the ability to activate switches and other objects. Then there are tertiary mechanics that can come into play: suck a lit firework down and you can shoot it back up with velocity, or you could have a lit bit of coal fall into the hole and suddenly your hole will shoot flames. My favorite, though, was when you had a couple of rabbits fall into the hole together and they'd fall in love, as rabbits do, breeding quickly and spitting out a ton of rabbits from the hole. It's all very silly. 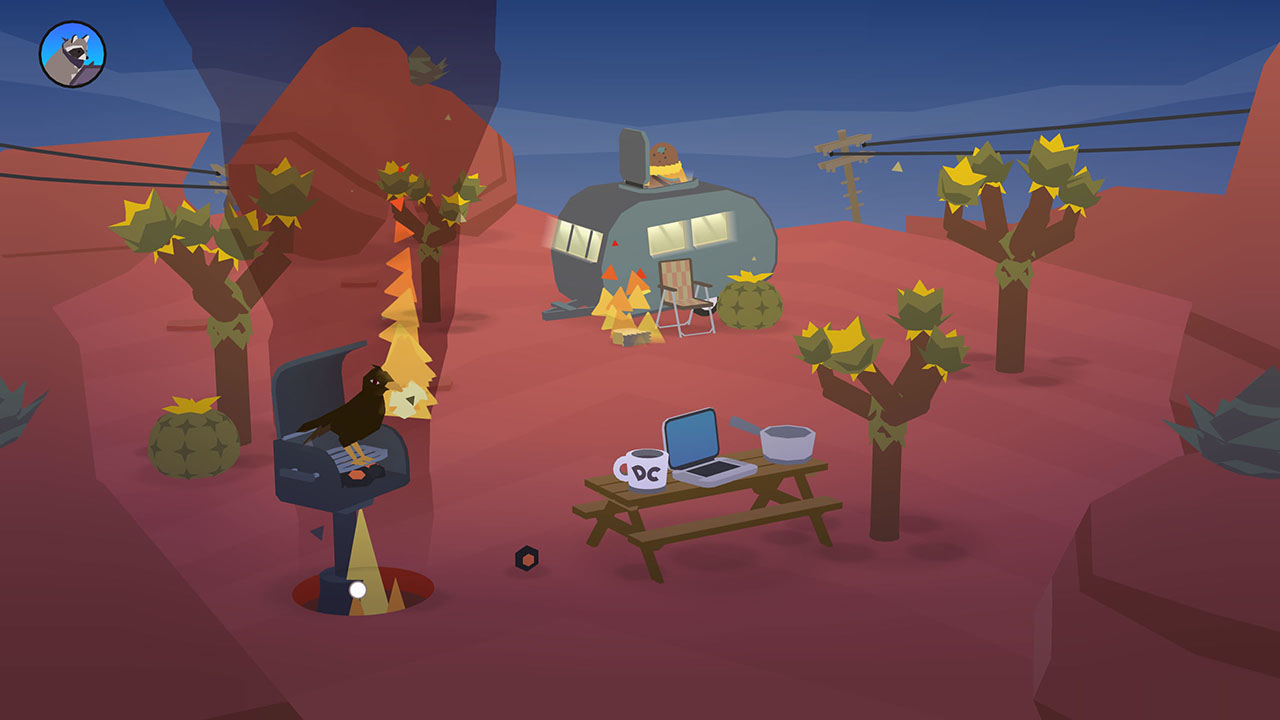 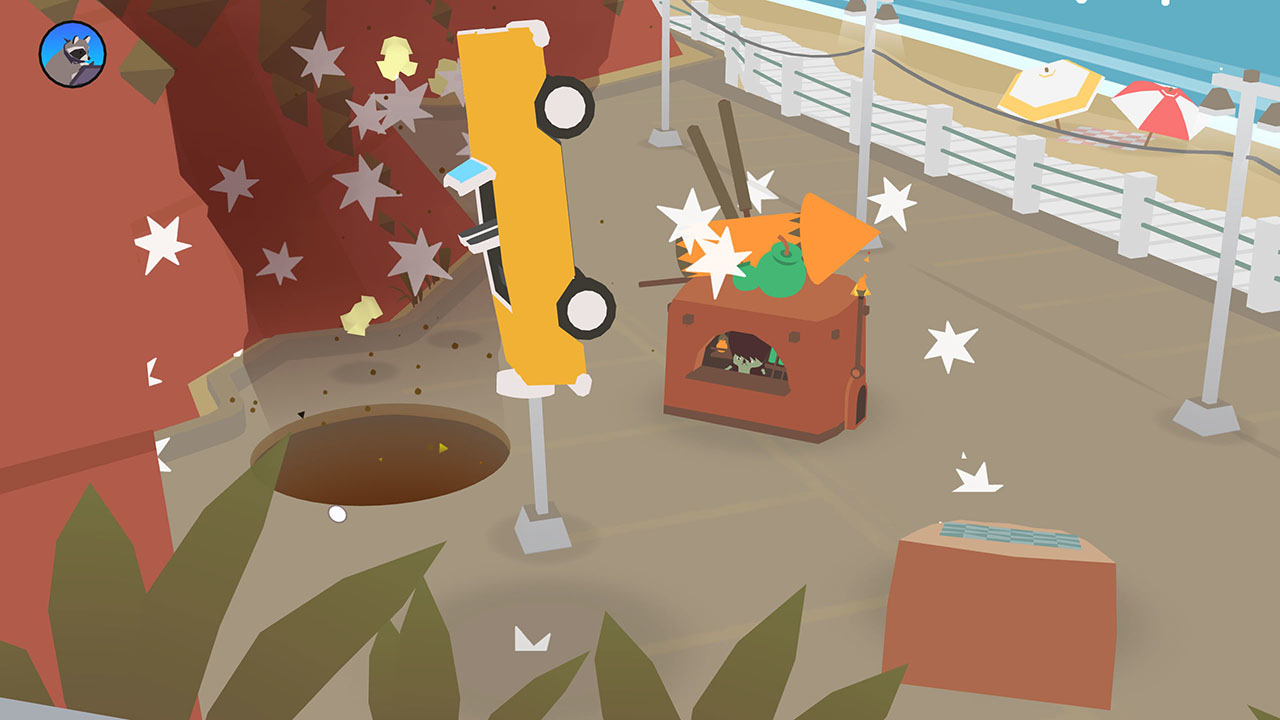 Ostensibly Donut County is a puzzle game. It really isn't that puzzling, though, not for anyone that's played video games for any length of time. Instead of being hard, finding joy in the challenge of it all, the game is more about the experience, the fun of sucking things down and, occasionally, spitting them back out. This is a game you relax with, enjoying the moment to moment game play while savoring the little things you can do and the fun that can be had playing as a hole.

As with many casual games I doubt Donut County will thrill everyone. It's pace is slower and its certainly not action packed. It's also easier than other, true puzzle games, never taxing its players to the point of frustration. But that's why I liked it, as it allowed me to chill on my couch and just have fun for a couple of hours while I destroyed (and then much later rebuilt) a town. Sometimes you want a hardcore experience, but other times it's nice to have a game like Donut County so you can chill out and enjoy the experience.