Gotta Make It All Clean and Tidy

Video games have come a long way since their birth decades ago. It's weird to actually think of the "cutting edge" media of games, a form of art that is still debated as if it wasn't a form of art because it's still considered "new" (this despite two generations of kids growing up with game consoles in their homes, and another generation coming up now) but the art form is still growing and expanding, finding ways to put the "art" into its concept. Games aren't movies or books and their interactivity is part of the story telling experience; it's takes the right game to use that to tell a story in an interesting and unexpected way. 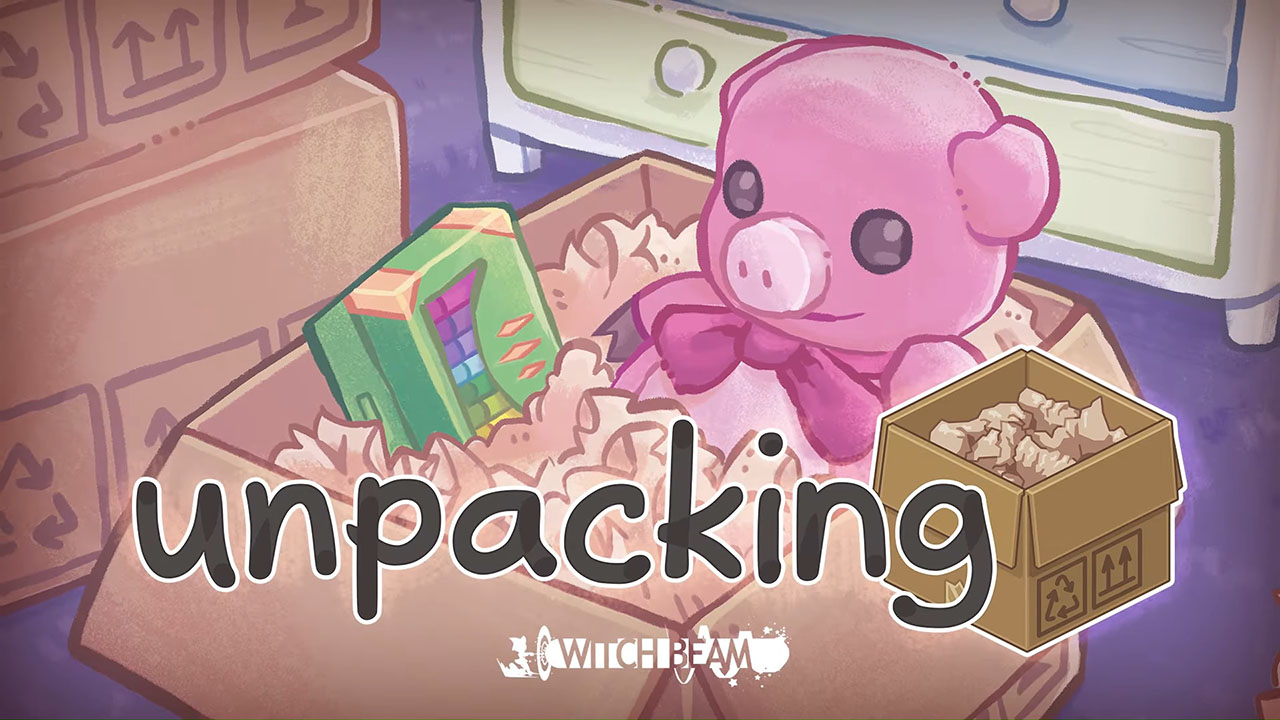 Unpacking is a game with a different kind of narrative. In fact, narrative, in the traditional sense, isn't really in Unpacking at all. There's no major story being told to you through audio or animations. Instead the game is entirely an interactive experience, a form of storytelling via passive inference while the player goes about a basic activity, gleaning the life of the main character without actually seeing her at all. It's fascinating, and engaging, but in a way that doesn't feel like anything else I've played before.

Nominally Unpacking is a puzzle game (although the emphasis on "puzzle" should be drastically downplayed). You're tasked with unpacking (thus the title) a set of boxes as our main character moves from one location to another. She starts off in her childhood bedroom, the first she ever gets on her own, before moving off to a college dorm, then moving in with four girls, and then again the first time she moves in with a guy. Each time you get more space, more boxes, more things to unpack, and your job is to make sure that everything is placed and everything fits. Once you've placed everything appropriately (and the game will eventually let you know if some items are out of place) then the rooms are done and you move the girl on to the next phase of her life.

And that's it, really. You never see the girl (who you get to name) which means maybe you're actually playing as her? I never felt like I was the actual lead of this story but, instead, some kind of interior decorator, trying to take what she's given me and make something clean, tidy, and organized enough to be livable. But that's one of the interesting things about the game: it never tells you who you are, it just gives you a role, so you get to insert yourself into this girl's life in whatever way feels appropriate.

As the game progresses you eventually have to start working with, and around, other people's stuff. This is first introduced when our girl moves in with other girls (I assume at a sorority but, again, the game never outright states). Here you can place her stuff where you like but you aren't allowed to move anything from the other girls, forcing you to work withing confined areas as best as you can. It doesn't make the puzzles that difficult but it did leave me annoyed at times as I couldn't just make everything perfectly clean and tidy to my heart's content. But then, when would four college girls have a house they shared that was clean and tidy? It makes sense. 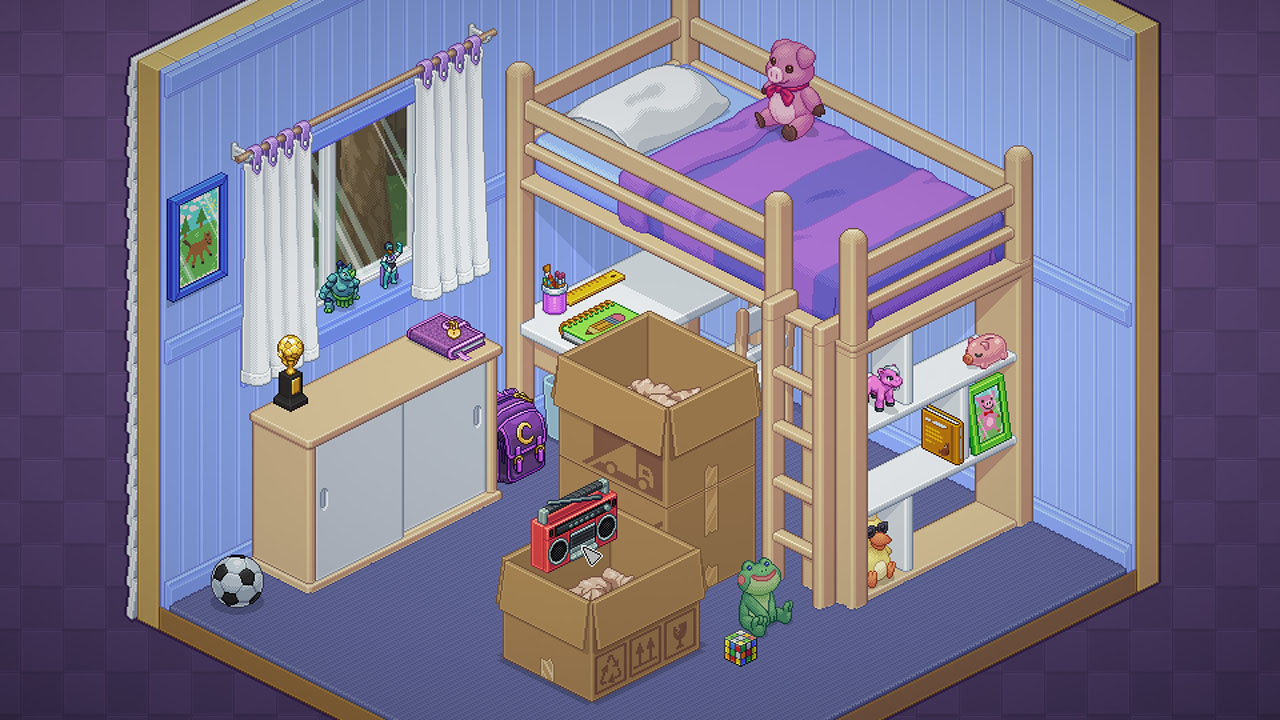 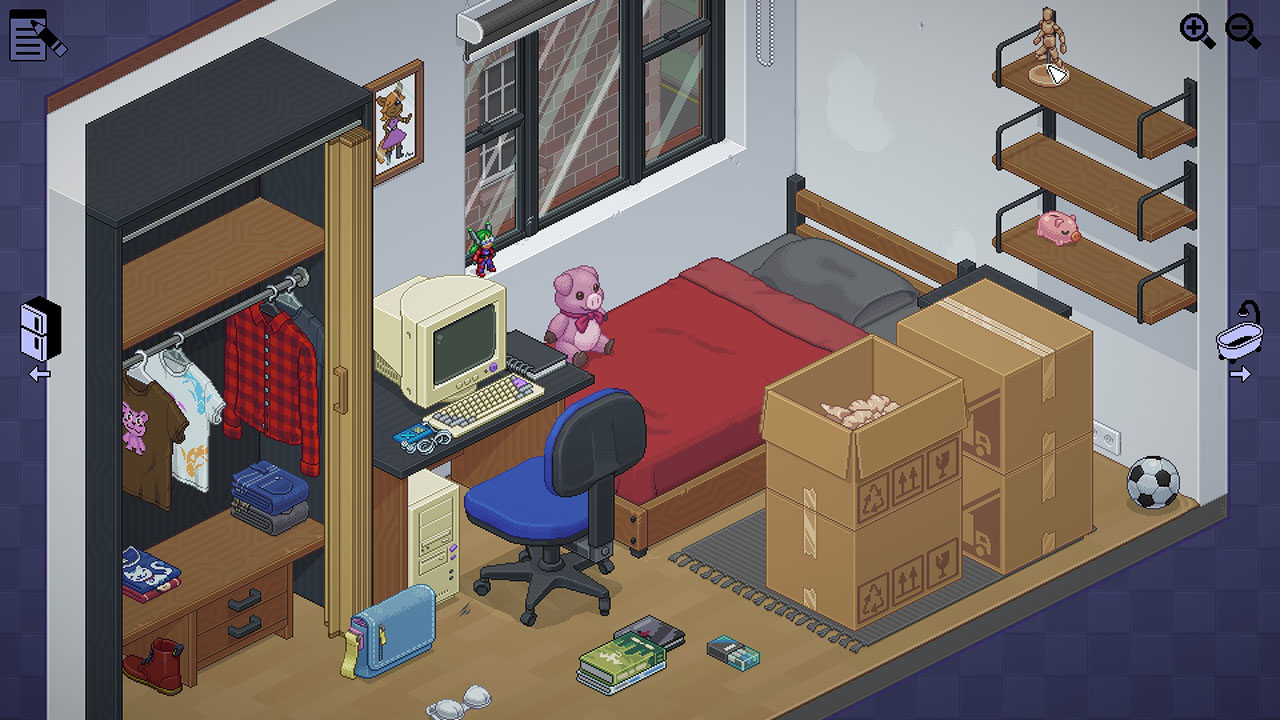 Things get a little more interesting as you move to the next location: our girl's first apartment with a guy. Here you actually are allowed to move almost everything and that allowed me the chance to better suit her into the guy's life. That, though, presented it's own interesting twist: suddenly you started getting a sense not only of the girl and her personality but you also started judging other characters by how they've made room for our protagonist (if the term "protagonist" even properly applies here). The girls in the sorority were one thing as they remained a nameless, faceless gaggle of girls and our gal just tucks in along side. Moving in with a guy, though, is different and you'd expect effort to be made to make space for her. It isn't.

After playing through this game I went and read other people's thoughts on the "story" of Unpacking because I wanted to see if I was being too judgmental. On the one hand you're allowed to sort and organize his stuff as you see fit, so he's allowed you into his space to share. At the same time you have to force you way in as he didn't make space on bookcases, in the bathroom, or even in the closet and drawers. It was a specific piece though that absolutely made me turn on the dude: our girl, having graduated college with a degree, literally has no place to hang it; you can't move the art and none of the walls left fit the framed degree. In the end I had to put it in the only place the game would let me: tucked away under the bed. And this one piece apparently annoyed not only me but other players as well. This guy is a dick.

It's no wonder that she eventually moves out. This continues the game on for another few locations (I won't spoil how many or what happens next, but suffice it to say that the time she lives at the guy's apartment is only the halfway point for Unpacking) and we get to watch our girl continue on with her life, growing, evolving, and eventually finding new love and new relationships. And all of this conveyed via the process of unpacking her life, over and over again, from cardboard boxes.

It's also interesting seeing how her life evolves. You never get to see her go to class, or actually pursue her hobbies, but you get a sense of who she is just from the things she moves from one house to the next. She has her art supplies which, combined with other items she later collects, implies a career in graphic design or some other artistic field (it's more expressly detailed in later houses). You also have her games, most specifically the Game Boy, GBA, and Wii that she starts carting from one place to the next as she grows up. They provide a sense of time and place, yes, but also they show what she cares about and what items of interest she can't live without. 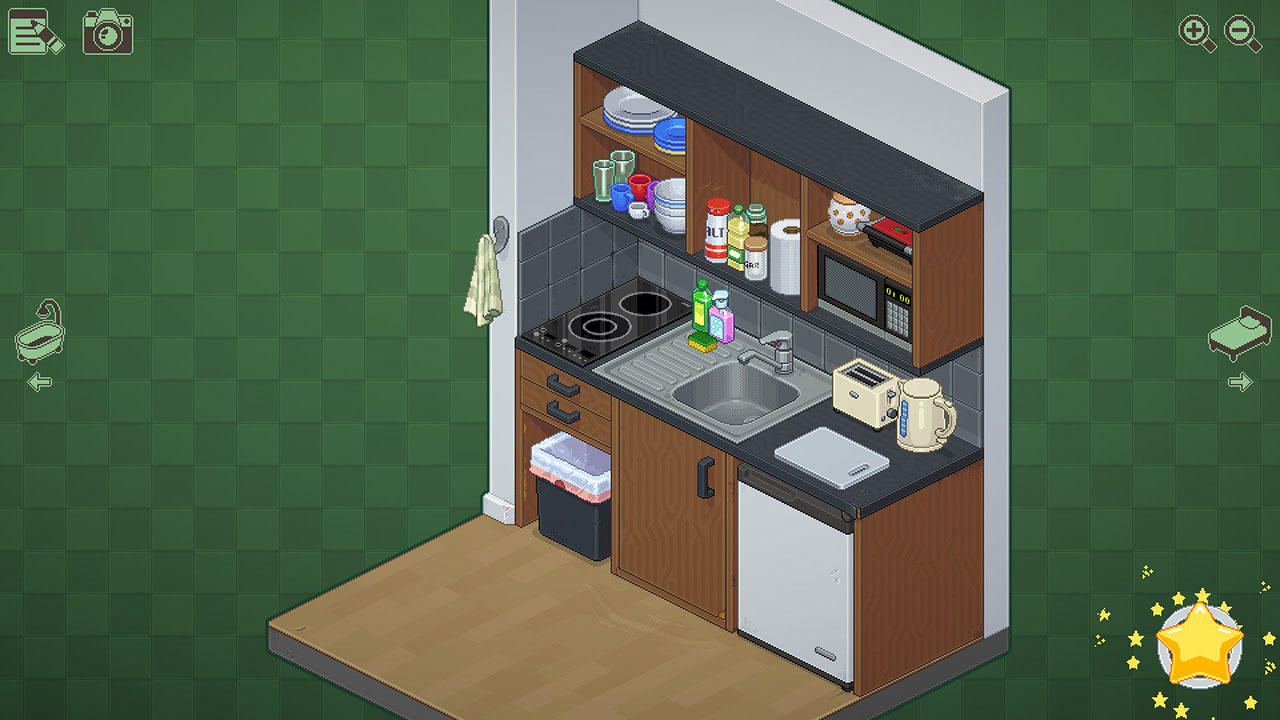 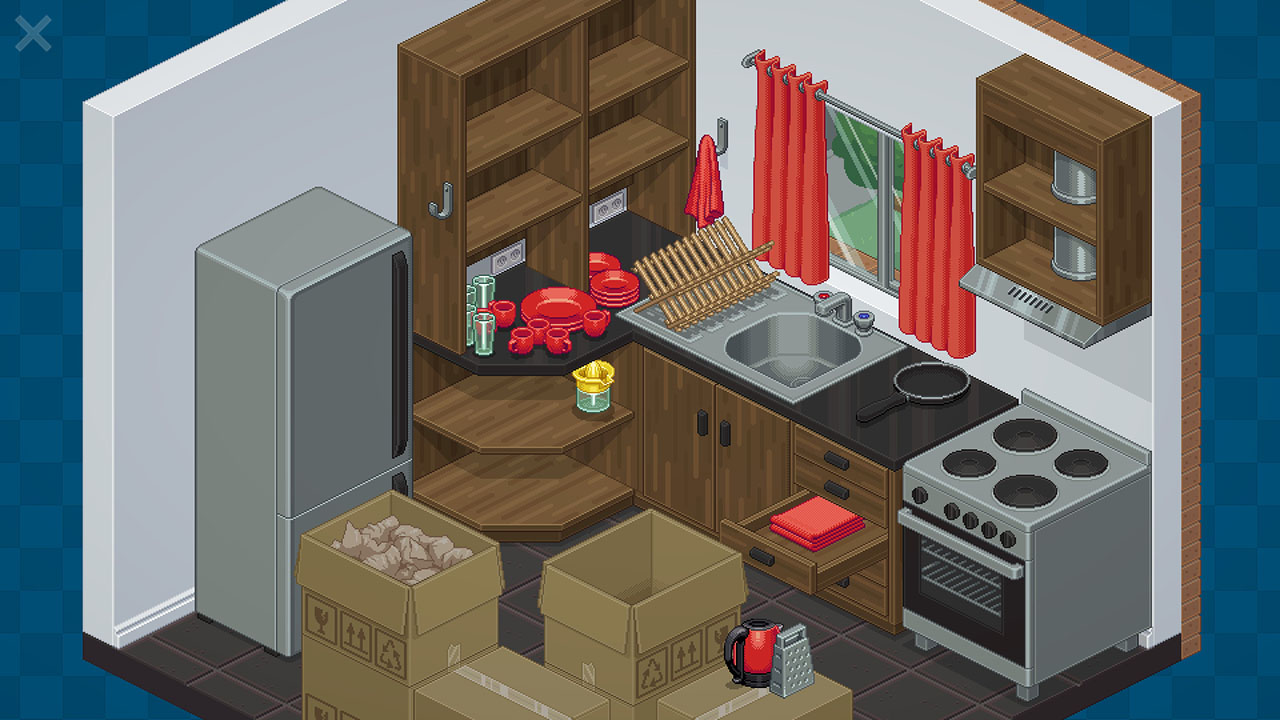 The detail that amused me the most, though, was a big, dumb, giant plush chicken that she picks up at some point and starts carting around with her. Each time she moves more and more little chickens of various kinds start joining the big clucker, and part of the fun at those points is deciding how to pose all the chickens together. It's silly and dumb but everyone has one of those kinds of collections and the game giving this to our girl adds a layer to her humanity making her seem more real even though the game itself is told from a fixed perspective and pixel art.

The game breathes with life. Its artwork is lush and detailed for what looks like a classic video game. It's accented by bopping tunes and smooth music that keeps you engaged and interested as you work your way from room to room, setting to setting. At first you just feel like you're playing a game but as you move along, and the music guides you through the pixel art rooms, you start to feel a sense of connection to the girl despite never seeing her and never meeting her. She's a different kind of silent protagonist but she says so much just through her stuff.

By the last couple of houses I will admit I was hooked on her life. I wanted to see where she was going, what she would do next (and who with). The game sucks you in, making you play a puzzler that amounts to, effectively, The Sims without a Sim-citizen. It's an engaging game that managed to tell a story just through your basic actions, moving around stuff. I sat down to play a couple of rooms and found, four hours later, I'd played through the game; it hooked me in and, without action or video or anything like that, somehow became compelling.

The biggest compliment I can give Unpacking was that once I reached the end I wanted to keep going. I wanted more places to take the girl, or someone she was related to or something. It didn't feel like her story should be over, even though it ended at a good place, and I could have gone another four hours of just watching these lives unfold. I don't know that this game is for everyone but I found Unpacking to be an interesting and engaging casual game that kept me in it from start to finish. If the though of unpacking pixel items from pixel boxes doesn't turn you off then you really should give Unpacking a try.