Going Down the Rabbit(-headed God) Hole

Ah, the works of Roland Emmerich. Although I think we've mentioned some of his films in the past -- I know I've made reference to Independence Day more than once, we haven't actually reviewed any of his movies for this site. The prime reason for that is, honestly, most of the director's films are bad. Oh, they're trashy fun garbage most of the time, but they aren't the kind of movies (outside of ID4) that really warrant any kind of re-watch. Once you've seen a Roland Ememrich film, you've seen it (and, hell, I'd argue that once you've seen any of his films you've seen them all). 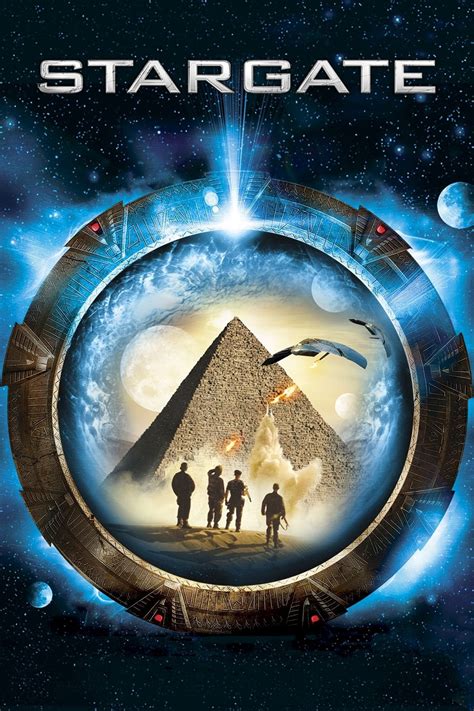 The director has a certain artistic style (if you could really call it that), going in hard on destruction and explosions. He's like Michal Bay in that regard, without that director's eye for the glossy use of cinematography mixed with CGI. He's a workman kind of director, a journeyman who found success with a few films that gave audiences something they hadn't seen before (Stargate, ID4), but he's spent the years since trying to recapture that magic so he could, once again, be one of the top Hollywood directors.

Stargate wasn't the director's first movie, and it wasn't even his first blockbuster -- he'd directed Universal Soldier two years earlier and that film, too, went on to spawn a long franchise, as did Stargate -- but it's with Stargate that the director's sensibilities really came into focus, aided in no small part by the fact that he also wrote the film as well as directing it. He would go into write and direct the even bigger and more bombastic ID4 (which, considering it also dealt with evil, conquering aliens, feels very of a piece with this movie) before falling on his face with the big, dumb, and awful Godzilla '98. He did find some further successes, but it has felt like every movie since ID4 has been an attempt to recapture the explosion destruction of that movie.

I can't really say that Stargate is a smaller movie than what would come after -- yes, it's budget was small by comparison but it's attitude and perspective certain befit all the movies that would come after. It's a movie very much in love with CGI and action with characters being a secondary thought. At the time the CGI was really cool and it was the thrills of it, the "ooh and aah" factor that helped to drive the movie to a pretty solid $196 Mil Box Office off a $55 Mil budget. Impressive at the time, and big enough to launch not only Emmerich's career but also the whole Stargate franchise.

Thing is, though, that movie really isn't that great. Where Emmerich's ID4 comes together by a dominating performance from Will Smith (at the actor's charismatic peak), Stargate doesn't have that same star power. It features dual leads of James Spader (never the action leading man nor the typical Hollywood dreamboat) and a very much "slumming it for the paycheck" Kurt Russell. I wouldn't say either of these men were truly invested in their characters -- Spader seems to be having a bit of ironic fun at the stupidity going on around him, while Russell seems checked out most of the time -- and their lack of investment does drag the film down some. 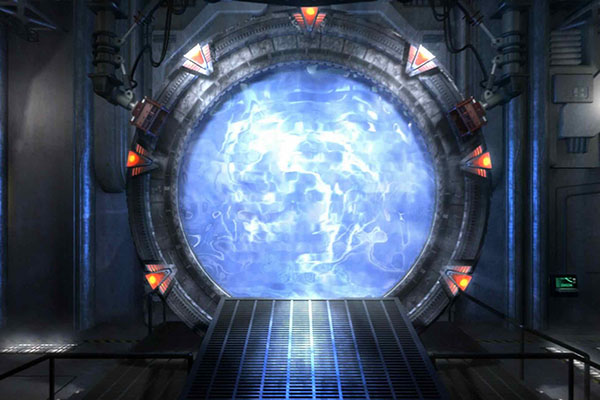 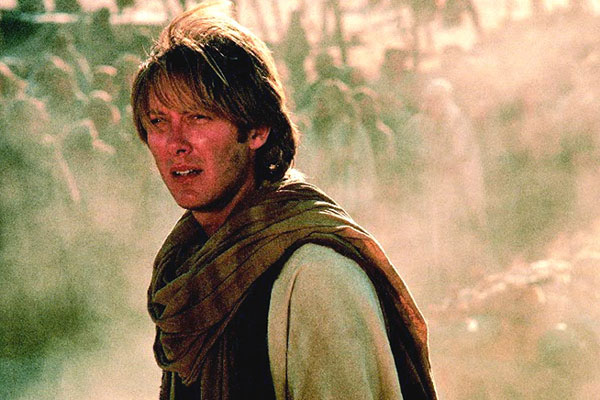 The big issue with the movie, though, is that it's really rather stupid. I like the idea of the film -- ancient aliens came to Earth and dropped their Stargate on the people, ruling them with an iron fist while using their human slaves to mine ore that the aliens needed, all before the humans rose up and buried the only way the aliens could reach Earth, the teleporting Stargate, and without that the aliens had to dominate a different world -- but the execution of the film is rather lacking. For starters, the science of the gate itself raises more questions for me than it answers. To operate the stargate you have to have seven symbols -- six to orient the gate on another world and one to show the "home" world. That's great and all, but if you already know what your destination is going to be, even if it's multiple possible worlds, why not use one symbol for that world, one for the home world, and have the gate draw the teleporting "line" between them? That seems much easier and more direct.

I think of that because much is made about how the stargate's symbols are based on the constellations of the home planet. The aliens look like Egyptian gods but the constellations they use are Grecian in nature. Even a cursory Google search shows that the Egyptians had different constellations so that alone doesn't line up. But there's also the problem that depending on various things like supernovae, planetary movement, and whatever else you could come up with over thousands of years, constellations could shift or change and they don't make for the best beacons to use for lasting technology. And how do constellations in our galaxy help us travel to a planet in a completely star system? Constellations only make sense from the home world's perspective and don't really orient on any other world. It's a goofy system, is what I'm saying. A simple one to one, "this is Earth's symbol, this is another world's symbol, and the gate network just knows how it works" would make a lot more sense.

And that doesn't get into the Marty Stu nature of Spader's Daniel Jackson, Ph.D. He's called into the Stargate project because the team working on the gate can't figure out how to make it work, or even how to translate the cartouche that went with the gate. He's able to figure it all out in a day, and then get the gate working soon after. Not only that, when he lands on the distant planet (along Kurt Russel's Col. Jack O'Neil and his team of army men), Daniel is able to have one conversation with a pretty girl, Mili Avital's Sha'uri, and suddenly he's able to pick up a 5,00 distant dialect of a 5,00 year ancient, dead language and speak it fluently. Really? Hardly.

What does work, even still, is the CGI. The evil villain is the alien Ra (Jaye Davidson), and he and his soldiers all wear giant animal masks that look like the Egyptian gods. While the masks were likely props (showing the power of practical effects), the transitions as the masks go on and off are pretty cool looking. The space ships also look cool, including the giant pyramid-shaped mothership for Ra. Hell, even the wormhole transitions sequences have a certain wow factor to them (despite looking like desktop screen-savers now). You can still get the idea of what made Emmerich think this whole idea was so cool, he just needed a real story to back it all up. 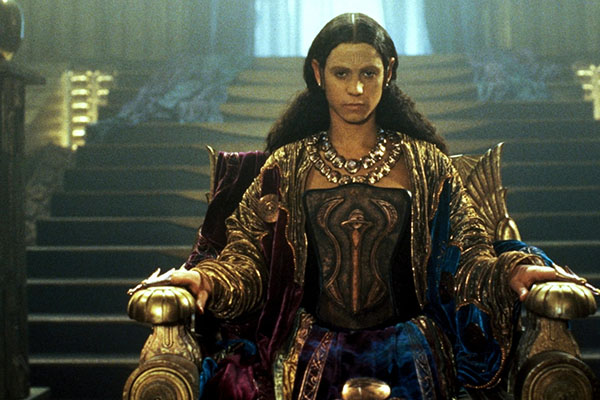 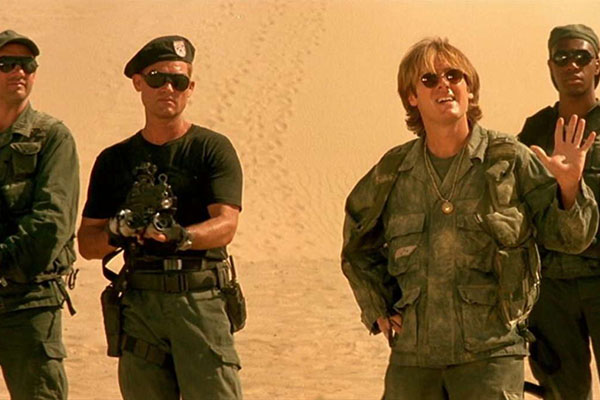 Despite it's CGI the actual film itself is really small. The meat of the movie -- our heroes on the distant planet of Abydos -- essentially takes place between two locations, the pyramid they arrived at (which eventually has Ra's starship on top of it) and the only human civilization that seems to exist on this planet, a little makeshift city in the middle of the desert. Everything that happens takes place at this two locations, and that includes all the action, all the beats of the men figuring out how to read this stargate and get home, and everything else. This, too, begs the question of how there isn't a bigger colony on this world, how humanity hasn't spread out and evolved in 5,000 years even with an alien god looming over them, and how the hell all this has remained sustainable with Earth cut off from this planet.

Sure, you could say that a lot of these points get explained in the show (a set of TV shows, really, that I couldn't get into so I don't have those answers). When this film came out, though, there wasn't an expectation of a sequel or a franchise to follow, it was just one goofy little film with some dumb characters and even worse science. It's a weird, dumb, very small lark of a film and, viewed occasionally, it's an okay film. But as the start of a massive franchise, Stargate is surprisingly not that great. It's really kind of a bad movie that's only entertaining in a popcorn sensibility kind of way. This is not the kind of movie you'd expect to be a lasting classic... and yet.