Too Drunk to Save the World

The Marvel Cinematic UniverseWhen it first began in 2008 with a little film called Iron Man no one suspected the empire that would follow. Superhero movies in the past, especially those not featuring either Batman or Superman, were usually terrible. And yet, Iron Man would lead to a long series of successful films, launching the most successful cinema brand in history: the Marvel Cinematic Universe. is steadily dragging every star in Hollywood into it's orbit. There likely will come a day in another few years where anyone who is anyone has some kind of role in the MCU, that to be in that cinematic universe is to "arrive" in Hollywood. Hell, the last trailer for the Eternals just came out and it has Angelina Jolie in it, a star big enough that she doesn't really need to be in the MCU. It's that big now. 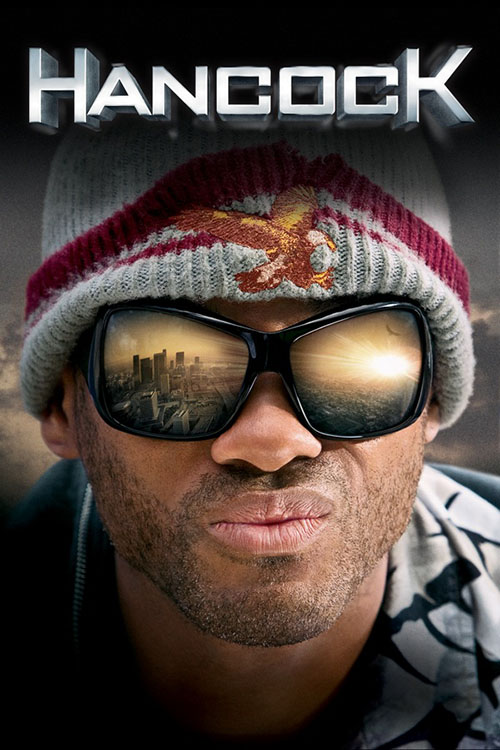 And yet one star that never made the jump over to Marvel's franchise (at least not yet having decided to try his luck in the DC Extended UniverseStarted as DC Comics' answer to the MCU, the early films in the franchise stumbled out of the gates, often mired in grim-dark storytelling and the rushed need to get this franchise started. Eventually, though, the films began to even out, becoming better as they went along. Still, this franchise has a long way to go before it's true completion for Marvel's universe., for all the good that did him) is Will Smith. He's not above being in a superhero film (Suicide Squad being a prime example), but it does feel like any time he does a frannchise film he's wrapping the film around him and not the other way around. Smith is a giant star that, even with his career arguably no where near as lustrous as it once was, still has charisma for days. You build a franchise around him, not the other way around.

Back in 2008 that was exactly what Smith and Columbia Pictures tried to do. Superhero films were just on the rise, with the big BatmanOne of the longest running, consistently in-print superheroes ever (matched only by Superman and Wonder Woman), Batman has been a force in entertainment for nearly as long as there's been an entertainment industry. It only makes sense, then that he is also the most regularly adapted, and consistently successful, superhero to grace the Silver Screen. sequel The Dark Knight coming into theaters and Marvel trying their own hand at franchise building with Iron Man (along with tons of more and less successful hero films coming out during the decade). The vibe clearly was that superheros were going to be gigantic business, someone just had to tap into it. And if anyone at the time could launch a superhero franchise not based on a comic series it was Will Smith.

That's not to say the resulting film, Hacncock was Will Smith's script; it was a script that had bounced around Hollywood for years going through multiple rewrites before it became the film that audiences eventually saw. But there's a difference between random superhero script and a Will Smith project and the Fresh Prince himself coming onto the project certainly crafted it into a Will Smith project. This was the star's chance to have his own franchise, a superhero he was allowed to define, and in many ways he got to do just that... it's just a pity the script wasn't really up to the task.

The thing about Hancock is that it's basically two full films frankensteined into one movie. The film opens with the drunken Hancock (Smith) asleep on a bench when a bunch of criminals cause chaos on the freeway, drawing his attention. The "hero" stumbles into action, catching the bad guys but also causing a lot of chaos, and nine million dollars in damages, in the process. Hancock, in short, is a menace. He might try to be a good guy but he's also an angry, bitter, drunken lout that really doesn't seem to care much about humanity despite being their protector. 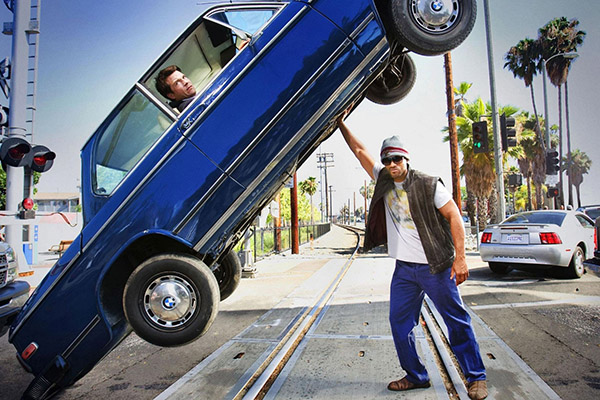 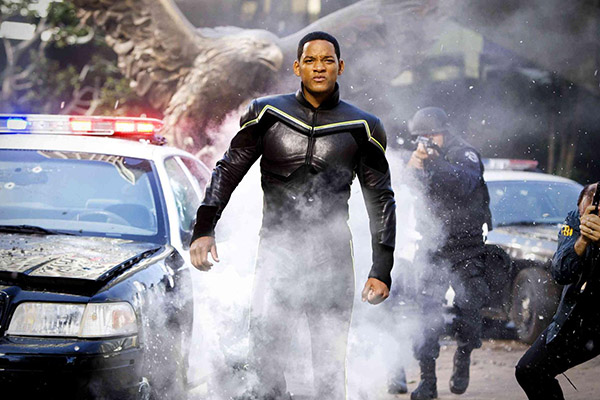 One guy, though, sees something special in Hancock: marketing exec Ray Embry (Jason Bateman). Ray thinks that with a little spit and polish, and the right attitude, Hancock could win over the city (and the world). And, wouldn't you know it, Ray's right. The only snag is that despite Hancock thinking he's the only hero in the world, the only one of his kind, there's actually one other: Mary (Charlize Theron), Ray's wife. And once Hancock realizes there's another like him the sparks (quite literally) begin to fly.

The thing about Hancock is that, despite it's flaws (or, really, one giant flaw) the film is actually really watchable. The hero is a different character from the one Smith usually played. Where the star came up playing cocky heroes, as in Independence Day and Men in Black, all of whom were just variants of the character the actor played in The Fresh Prince of Bel Air, Hancock is something different. He's flawed, he's closed off, he doesn't show much of the same cocky charisma that Smith's usual characters had. It stretched the star as an actor and, frankly, it worked really well. Smith makes the film watchable, and most audiences agreed, helping the movie to a $629.4 Mil haul off a $150 Mil budget.

And yet the film is considered something of a failure. Most people, when you bring the movie up now, call it a bomb (despite how much it made). I think the reason for that is that the film, despite how watchable it is, doesn't live up to expectations. One reason for that is that Smith doesn't play his usual character. It's a great performance but if you wanted to see Smith play Smith, Hancock is a bit of a stretch. He grows into someone you like but he doesn't start off that way and that might have turned off audiences.

The bigger issue, though, is that the film tries to do too much in one movie and the story struggles because of it. If the film had just been about Hancock being a lout but then slowly, over the course of the film, rehabilitating his character until he wins the hearts and minds of the city that could have been a great arc. That's enough story, honestly, for a whole film and it would have played just enough against the standard superhero story to make for something fresh and new after nearly a decade of superhero films already flooding theaters. 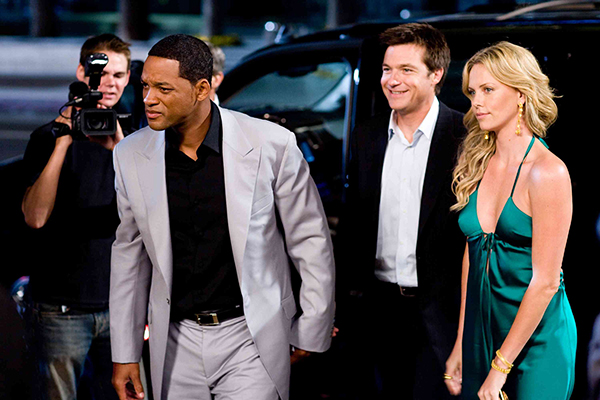 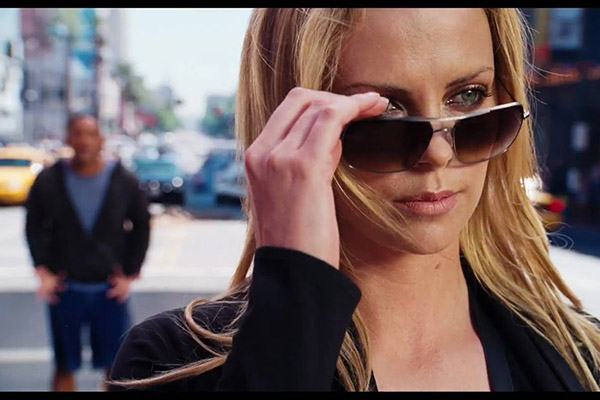 Where the film loses me, and probably lost most people, is where it's revealed that Mary is another "god" like Hancock. I'm not saying this is a bad story choice on the whole -- it's an interesting twist and the film has a how explanation about how the two of them, time and again, are drawn to each other over the centuries -- but adding this into the main story of Hancock rebuilding his image, actually cutting away from that story to then do this original tale about Hancock and Mary ruins the flow of the film. Hancock's story here should end with a big climactic battle before he's welcomed as a hero; instead that's the mid-point of the film and the movie then wanders off to tell an origin story (and loses a bit of steam in the process).

I think the people behind this film really just needed to realize they had two movies worth of story here. Using the common setup of superhero films now, this first film should have been about Hancock winning hearts and minds. Then, once that story was done, we roll to credits with a mid-credit sequence that reveals Mary was another hero-like god and that revelation could act as a small cliffhanger that could have led to a Hancock 2. Instead the film feels overstuffed and, worse, disinterested in the main trhust of the first 45 minutes of its story. I liked where the film was headed by the mid-point, even if it did feel rushed. I just get increasingly less interested the further this film moves away from that engaging story.

Hancock is a film that, on paper, should have worked like gangbusters. It even did, in a way, but since we've never seen a proper sequel I think everyone involved understands that, deep down, they screwed up a bit. They tried to do too much, too hard, and the film suffered for it. In an ideal world this film would have been handled better and Will Smith would have gotten his own superhero franchise. Instead he was forced to slum it once in a DCEU film and, frankly, I doubt he'll ever do that again either. Hancock could have been a tentpole of the superhero genre. Instead it became just another also-ran.