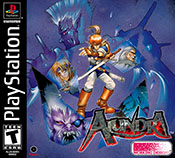 Alundra, is the elven boy who can observe other peoples' dreams as his own. When he first learns of his power, he is asleep on a boat sailing across the ocean. During his deep sleep, he is told by a mystifying wizard that he is the guardian, also known as "the Releaser," of an ancient seal. Confused, Alundra awakes and leaves his lodging to explore the ship. When he leaves his room, he sees a gigantic storm brewing over his ship. The ship is destroyed by the storm, and Alundra is thrown overboard. Luckily for him, he washes up on sandy beaches outside of the town Inoa. During his sleep/passed out phase, Alundra learns that he is a dreamwalker (he has the ability to traverse and view other peoples dreams) and that it is up to him to defeat an ancient evil known as Melzas (Melzas is like any other demon -- wants to end the world, angry at humanity, etc).

You find out, as you play the game, that Melzas broke the spell of imprisonment and is terrorizing the seemingly peaceful town of Inoa. Melzas commands many different types of characters to do his evil bidding, and it is Alundra's job to defeat the evil Melzas and bring peace to Inoa once again.

The story seems a bit cookie cutter at first; it tricks the gamer into a false sense of security, you think the story is pretty easy to follow and predictable (some of the plot twists you can see coming from a mile away). Then, out of no where, you are slapped in the face by good story telling; all of a sudden you start to care about what happens to all of the characters, and you are at the edge of your seat frantically mashing buttons to progress the story.

Working Designs, the creators of the legendary Lunar Silver Star Story brought us a beautiful, thought provoking game. Alundra plays a lot like an old school Zelda game, with similar action (in the fact that you have a pseudo-birds eye view). The puzzles can be very difficult, which gets a little annoying if you really want to progress through the story quickly. Like Zelda, you have to know how to time your attacks and the general layout of the game world. As you first play this game, I suggest doing every puzzle -- most of the puzzles are only available when you first run across them. There is no going back in Alundra, you either do it or move on to the next part of the story.

Unlike Zelda, Alundra truly shines in its mature themed story. Towns people die, seemingly, every second you play. The demon Melzas is not playing around when he says he wants to rule the world through darkness.

The graphics, some of the best I've seen in a Playstation game, are smooth and well animated, and it is very easy to tell where you are going.The backgrounds are no less than breathtaking and the monster design is unique and refreshing. You fight, more-or-less, against the same everyday RPG monsters, but the art concepts are unique and stimulating; character sprites are near flawless, and the dungeon set up is amazing. The game's anime-inspired cinematic opening (and ending) is beautiful and flows nicely with the rest of the story and artwork, and the music syncs up perfectly.

The music is nothing short of epic; you feel as if something legendary will happen with each push of the button. Alundra, without a doubt, has one of the best game scores that I've ever heard. I cannot remember one song that began to get repetitive and old. If I could find the soundtrack to this game, I would buy it without hesitation.

If you enjoy older Zelda games (and want more of a challenge), or enjoy difficult puzzles with RPG elements, I would suggest trying this game out as soon as you can find a copy -- it will not disappoint! This game is, by far, one of the most underrated and under appreciated games ever created. When you finish the game, seeing Alundra walking away, with the epic music reaching its threshold, a sense of intense accomplishment engulfs you like no other game can. Every RPG gamer should own, and play (or replay), this game immediately.