Over the weekend I was treated to something magnificent: on Twitter, current flaming hell scape as brought to you by Elon Musk's $44 Bil, some magical bastard posted the entirety of Hackers in two minute and ten second clips, all in one long thread, in order, so you could watch the whole thing start to finish. This thread was up for a good twelve hours, in defiance of (Musk's now gutted) moderation team. I, of course, took the opportunity to watch this majestic mess. 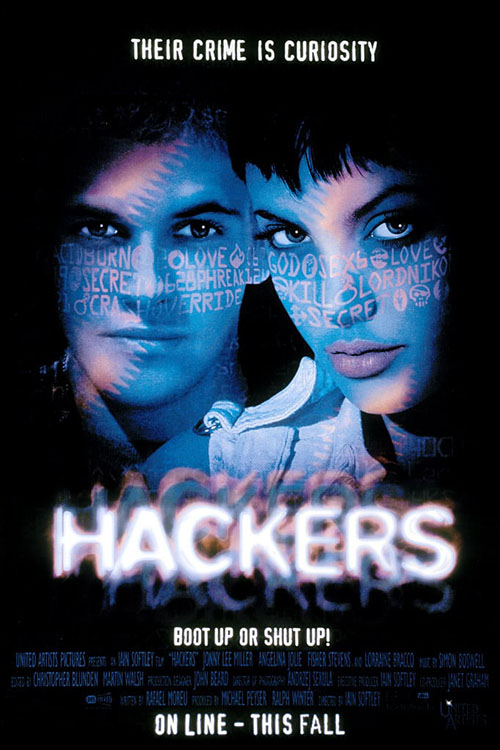 For those of you that haven't seen it before, Hackers is a tragically stupid 1995 film about, you guessed it, hackers. It starred Jonny Lee Miller and Angelina Jolie, along with a cast of character actors to flesh out their crew, but more than the actors in it the film is known for being amazingly, astoundingly stupid. It hits peaks of '90s nadir that very few other films could even manage. If movies like Clueless, Empire Records, and Wayne's World tapped into the 1990s and created a vibe that helped define that decade, Hackers manages that for all the wrong reasons. It's astounding, brilliantly idiotic.

But here's the thing: what seemed tragically terrible in 1995 (to the tune of $7.5 Mil at the Box office against a $20 Mil budget), and in the 2000s, and even in the 2010s (and yes, I watched the film at least once in each decade) now actually seems oddly prescient thirty years removed. It's like the film found some deep well of 1990s nostalgia before that was even a thing, creating this weird, self-parody throwback that now works because it seems like it's taking the piss out of itself. It was terrible when it was released but the film is infinitely more watchable now as a kind of humorous cheese. Hackers just works, and that's a statement I never expected to make.

In the film we first meet Dade Murphy, aka "Zero Cool" (Jonny Lee Miller) as he stands trial at the young age of 11 for computer hacking. He created and spread a virus that crashed over 1,500 computer systems (1,507 to be exact). Punished with seven years of probation that barred him from using a computer or owning a phone during that time, along with a $45k fine, frankly Dade got off easy. But he had to spend those seven years without the one thing that really gave him a connection to the world.

Seven years later, Dade and his mom (Alberta Watson) have been forced to move to NYC. There he falls in with a group of like-minded fellows -- Matthew Lillard as Emmanuel Goldstein / "Cereal Killer", Renoly Santiago as Ramon Sanchez / "The Phantom Phreak", Laurence Mason as Paul Cook / "Lord Nikon", and Jesse Bradford as Joey Pardella -- who love to hack and do all things hacking related. He also falls for a girl -- Angelina Jolie as Kate Libby / "Acid Burn" -- and he uses his hacking prowess to gain her affection. Things, however, take a turn when Joey hacks into the computers of Ellingson Mineral Corporation and accidentally stumbles onto a garbage file that, apparently, is more than just garbage. This gets him the ire of not just the FBI but also their chief tech bro -- Fisher Stevens as "The Plague" / Eugene Belford -- and suddenly all our hackers are on the run as they try to hack their way out of this hacking mess. 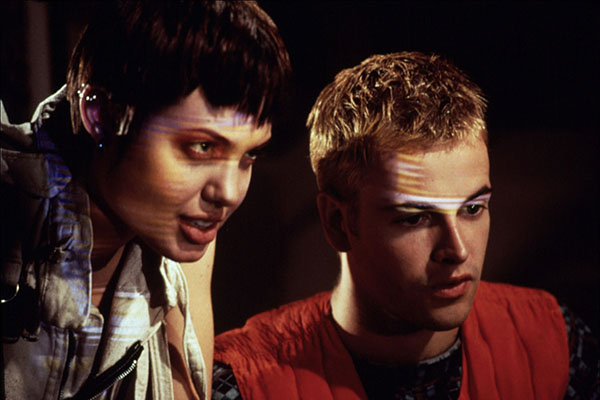 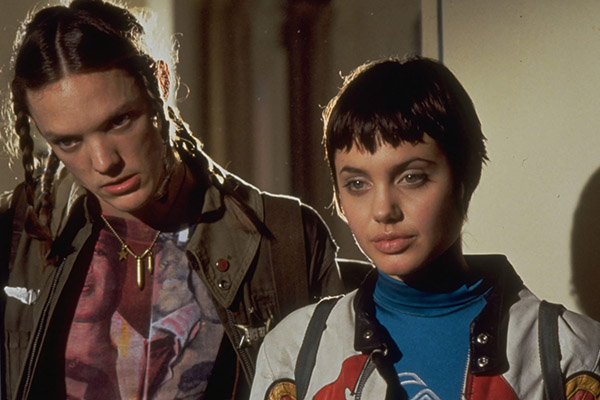 When it was created in 1995, Hackers already felt dated. None only do the characters look and act odd, not like 1990s kids but what studio heads think "those darn kids" look and sound like, but the computer tech on display is so anachronistic and dumb. This film came out around the same time as other "computer marvels" like The Lawnmower Man and Johnny Mnemonic, films that visualized computers as these weird, VR landscapes where anything was possible as you flew the information superhighway. It looked terrible back then and looks even worse now. Nothing in this film seems right at all.

It's also hilarious hearing characters go on and on about how cutting edge the tech their using. Watching two very pretty people geek out about a 28.8 baud modem is a highlight for anyone's movie watching experience here in 2022. Hearing actors try to say likes about "PCI Bus" and "refresh rate" and all kinds of other things they clearly don't understand (not any better than the script, written by people that also didn't understand what they were talking about) leads to some unintentional comedy. Again, it was terrible back in 1995 when the film came out and it's aged worse now.

But the film also has its charms, the greatest of which is its soundtrack. The film crashed and burned (there's a pun there if you watch the film) as the Box Office, but it also had four (yes four) very successful soundtrack albums. The film is packed with techno and electronic, house and club and rock, and the soundtrack is infinitely listenable. Packed with tracks from Underworld, Orbital, the Prodigy, Stereo MCs, Leftfield, Moby, BT, Fluke, Brooklyn Bounce, and more, this is a who's who of electronic music for the era and these albums are still worth listening to now even if you never want to see the movie they were attached to.

And, frankly, the film is just such glorious cheese. It's a terrible movie, make no mistake, but that's entirely the fault of a bad script is an over-the-top performance by Fisher Stevens. Outside of this, though, the production values are great, the rest of the cast is game, and there's this overriding sense of fun that pervades the whole piece. It's a film where you have to shut off your brain to enjoy it, but once you do (and remove yourself enough from the decade that birthed it) the film feels like a glorious comedy. It's fun and funny in a way that works now, all these years later, as it feels detached from everything that created it. 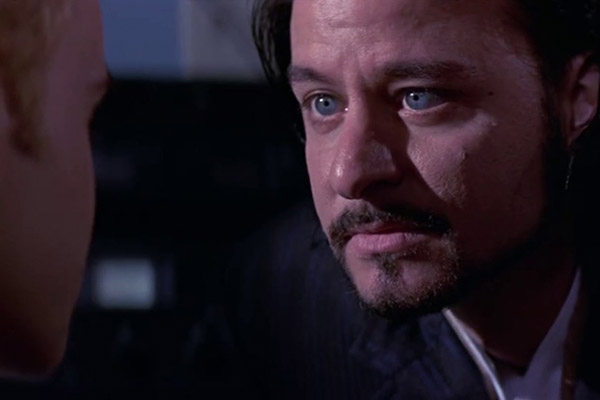 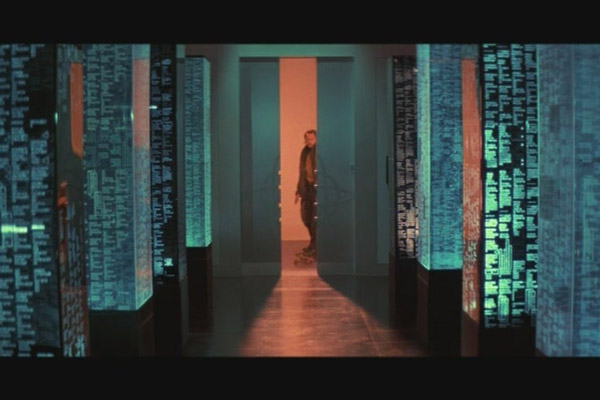 Plus, there's this weird ethos to the film, the idea that people can break all the rules, hack and cheat and steal, and as long as they're doing it for the "right" reasons they can get hailed as heroes. It's a bad message to send and the film not only commits to it, Hackers doubles-down on it in the climax of the film. That's what made it perfect fodder as the film hacked up and sprayed across Twitter for one glorious day. Someone watched the film, took the message, and then followed it to the letter to stick one big middle finger right up at Elon Musk. If the characters at the center of Hackers were real I think they would have been proud of this really, really stupid act of spiteful defiance.

Watching a film in two minute, ten second chunks across a whole thread of posts, with each clip forcing you to click on the next with absolutely no auto play, is a terrible way to watch a film. It was an atrocious experience that, for something better, I would have absolutely hated. But for Hackers it was the perfect was to experience that film. It's a bad way to watch a bad movie and all the dumb little acts of defiance all added up together to create something so much better than the sum of its (49 of 49 posted) parts. I loved watching Hackers again, and I enjoyed it even more because I, too, got to stick a middle finger up a Elon Musk by viewing this whole thread.

If you haven't seen Hackers before now is the perfect time to go in and watch it. It's 1990s cheese that works better now that we're 30 years removed from it, so you can sit back and barely think about how the film has no sense of the real world. It's an unintentional comedy that really thrives with low-impact, no-brain watching. It's not art but it's something so much better: watchable, majestic self-parody.