It's fair to say that DC ComicsOne of the two biggest comic publishing companies in the world (and, depending on what big events are going on, the number one company), DC Comics is the home of Superman, Batman, Wonder Woman, and just about every big superhero introduced in the 1930s and 1940s. really has struggled to get their comics adapted into films with any kind of consistency or success. This isn't just to rag on the DC Extended UniverseStarted as DC Comics' answer to the MCU, the early films in the franchise stumbled out of the gates, often mired in grim-dark storytelling and the rushed need to get this franchise started. Eventually, though, the films began to even out, becoming better as they went along. Still, this franchise has a long way to go before it's true completion for Marvel's universe., although obviously that helps to inform this discussion, but to say that while Marvel has seen great success with their Marvel Cinematic UniverseWhen it first began in 2008 with a little film called Iron Man no one suspected the empire that would follow. Superhero movies in the past, especially those not featuring either Batman or Superman, were usually terrible. And yet, Iron Man would lead to a long series of successful films, launching the most successful cinema brand in history: the Marvel Cinematic Universe., DC has spent more than a decade trying to capture any kind of success out side of Batman Begins and The Dark Knight. 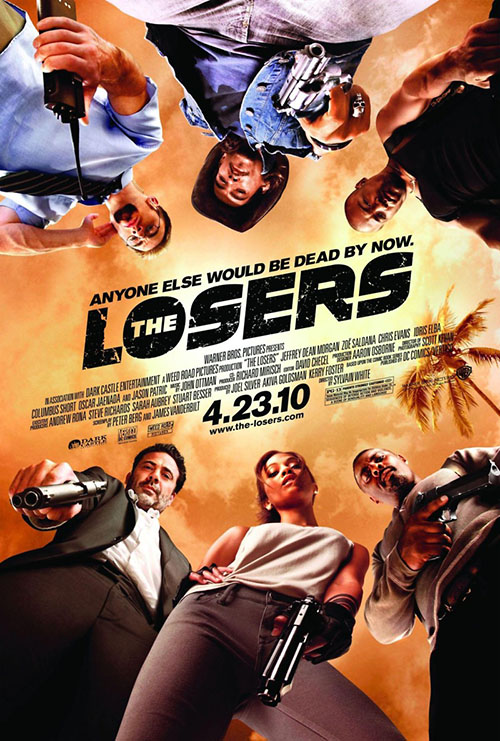 Nowhere is that more clear that 2010's The Losers. This film came on the crest of a glut of films with a similar concept: a team of gun-toting heroes sent in to solve a problem and then, after, have to fight to regain their lives on a quest for revenge (a month after this film came out we had the very similar The A-Team remake which was vastly more successful). Beyond that it had a killer cast, most of whom actually ended up in the MCU: Chris Evans, Idris Elba, and Zoe Saldana. This film didn't lack for talent or a story that could have played and yet it just didn't hit the mark with fans. Why?

I think some of it is probably due to timing. The film did come out a month before The A-Team, but where DC's film was based on a decently received, but not that well-known, comic series, The A-Team is, well, The A-Team, a name that resounds with at least a couple of different generations. If you saw trailers for both of these films at the same time likely you would have been far more excited for the big name flick than the one that seems like just a "pale copy" of the "better" property.

There's also the fact that this film isn't exactly easy to advertise. The plot of the movie -- a team of mercs sent in by the CIA to kill a drug dealer only to find themself embroiled in a larger plot, left for dead in Columbia, and forced to fight the the man that tried to have them killed -- is both simple in concept but impossible to advertise in a trailer without spoiling the whole story (which the trailer does, in fact -- I'd link to it but this movie is so ignored than no one has a good copy of the trailer Online anymore). A number of people may have seen the trailer, felt "I've seen the whole movie right here and it doesn't look that special," and decided to stay home.

The thing about it is, though, that the film's best moments don't really come from the action, which is decent if not exceptional, nor from the drama, but just the way the characters interact and play around. This is a very funny and engaging film so long as you don't bother with the actual story on screen. The plot is rote, "twisty" without really having any twists to it, and the villain is one-note and barely sketched. But letting the actors in the team play around, joke and laugh, gives life to their characters and provides energy to the film that it would otherwise lack. It's not a great film but it is watchable, at least once in a while. 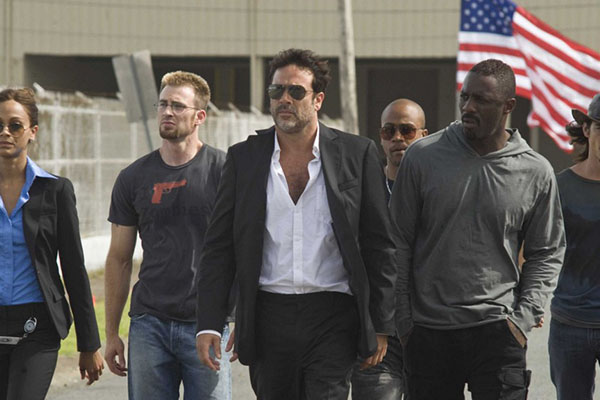 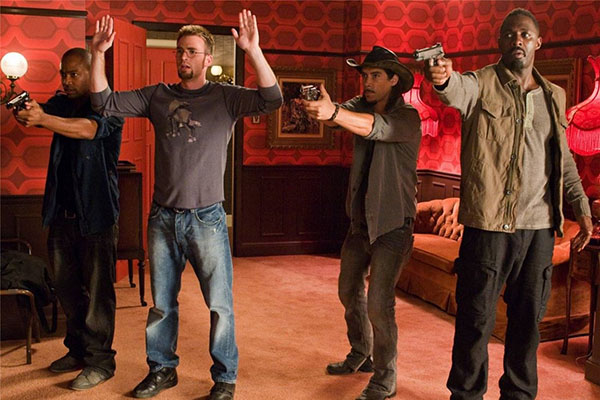 The Losers are a CIA-affiliated team of soldiers sent into hot zones to run covert missions like only they can do. The team is made up of: Roque (Elba), explosives; Jensen (Evans), tech; Pooch (Columbus Short), transportation; Cougar (Oscar Jaenada), sniper; and Clay (Jeffery Dean Morgan), the leader. Together they're sent to kill a drug lord, a simple mission as they "paint" a target with a laser sight and call in an air strike. But when they see a buss full of kids dropped off at the drug lord's compound they try to call off the hit, a request that's denied by CIA handler (and voice on the comms) Max (Jason Patric). So the Losers head into the compound themselves and get the kids out (while killing the drug lord) before the air strike. wipes the compound off the map. But Max sends a hit on the Losers, blowing up their chopper. Unfortunately for Max the Losers had put the kids on the helicopter (to get them to safety), so not only were the Losers not dead but now they're super pissed off.

When an extra-governmental agent, Aisha, offers them a chance to get back into the U.S. and get their lives back, they agree, and both sides also agree to send the Losers after Max to get revenge and take out one more bad CIA agent. Aisha, though, has her own reasons for wanting Max dead and as the mission get more complex, and secrets start to come out, the Losers get wrapped up in yet another double-cross. They'll have to fight their way out of another mess if they're to get Max, and save the U.S. in the process.

Part of the issue with the film is that Max isn't much of a character. He's a series of ticks stitched together on top of a villainous plan that doesn't really make any sense. He wants to develop, and unleash, a massive bomb that will wipe away sections of the U.S. all so that the U.S. will then blame it on terrorists and go to war. And this, somehow, will save the U.S. from... well, I'm not really sure. Max seems assured it'd work but it's hard to take the ideas of a psychopath seriously. The fact that all his goons go along with his mad scheme (which, admittedly, does make them a lot of money) doesn't help to sell this story at all. Max needed more fleshing out, and more connection to the Losers, to make everything we witness not only stick but also make sense.

If Max had been their handler for a while, a friend an ally that betrays them after a couple of films, that might have worked better. But here we have Max dropped on us just as we're trying to get to know our heroes, and the the villain disappears for the rest of the first act. His "betrayal" of the team doesn't work because we don't know him and he doesn't know the Losers. And the fact that the Losers then spend a good half of the film trying to figure out who Max is and what's going on illustrates just how threadbare this story is. They're left wandering while Max does not much other than wait for the Losers to catch up. It doesn't work. 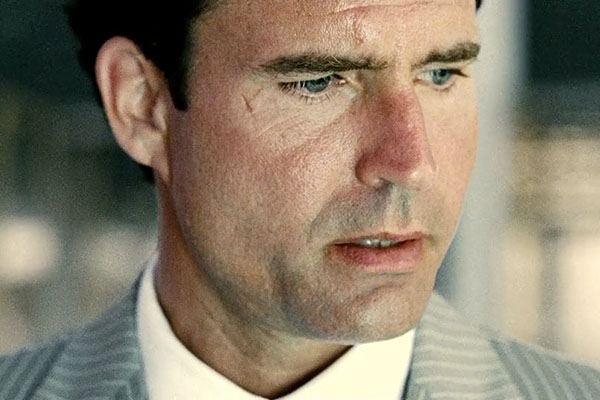 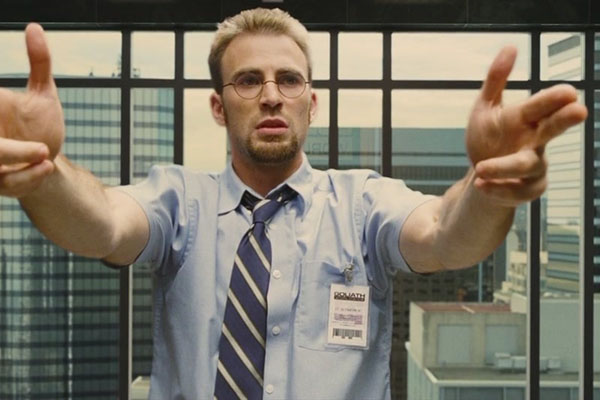 The action also doesn't really land. There's a lot of gun-play in the film without much impact, made worse by the fact that they have the single greatest sniper on their team, Cougar, who can basically solve any situation the guys find themselves in with a shot from across the city. This drains all the danger out of much of the action, which already felt airy and weak with bad wire-work, cruddy CGI, and a lot of bloodless shooting. Action needs to have crunch and impact, it needs to hit to drag you into it, and the action in The Losers has none of that.

What it does have, though, is a game cast that can deliver bon mots with ease. Many of the actors are great at this, with Morgan and Short delivering plenty of fun, casual charm as they banter their way through their scenes. The best, though, is Chris Evans who was still one year out from his biggest role in Captain America: The First Avenger but had already delivered hilarity in Not Another Teen Movie. The actor gets to play Jensen a lot like he played his character in that previous spoof comedy, acting like a card and going ham on the material. He has such a good time, stealing every scene as he jokes his way through the movie, that it practically carries The Losers on its own.

Honestly, this film needed some work, massaging the script while pouring more money and talent into the action. But it also just came out at a bad time. A few years later, when comics were huge business for everyone, the DC logo attached to an action film like this might have put a few extra butts in the seats. I just don't think you could have gotten Evans, or Elba, or Saldana for this movie then, and without all the talent in front of the camera this film wouldn't have been as watchable at all. The Losers isn't great but it is fun and while it might have been more successful had it come out in a different era it's an interesting slice of what could have been all things considered. DC could have had a hit on their hands, with a cast that was all poised to be big names within a couple of years. But, like they always manage to do, they blew it. Oh well.