Disney is a greedy corporate entity, but then just about every corporate entity is greedy. If anything artistic comes out of the House of Mouse it's not because the Disney board felt that artistic passion and wanted to foster it; they just saw something that could make a buck and went with it. The trend of turning all of their animated classics, started way back in 1994 with remakes of The Jungle Book and (more important for this review) 101 Dalmatians, is a purely corporate decision: people watch these remakes, presumably as a relive stories they grew up with in some kind of fresh setting and Disney rakes in the cash. If they didn't make money, Disney wouldn't make them. 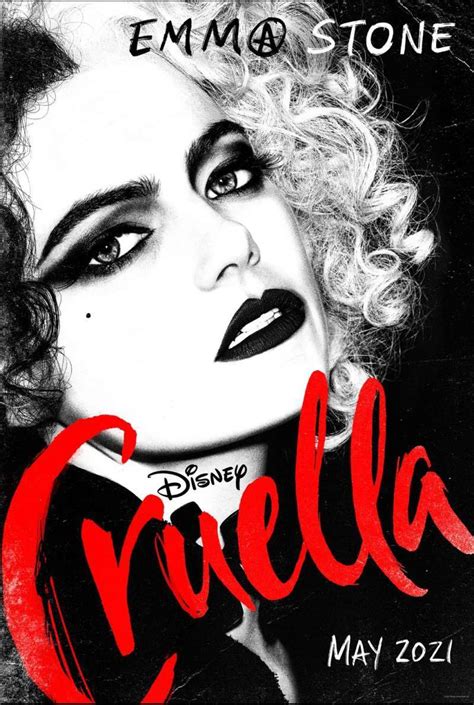 That's not to say that these films can't, sometimes, actually turn out to be pretty good. I'm a fan of the original Maleficent, the studio's retelling of their own Sleeping Beauty from the perspective "villain" Maleficent, and I didn't hate the live-action Aladdin. Not all of them are good movies (I hated the 2019 The Lion King), but I do think there is merit in new versions of these stories so long as the studio tries to so something new with the material.

It's from that perspective, then that I found myself watching, and enjoying, the newest remake of 101 Dalmatians, Cruella, a film in the Maleficent vein that takes another of Disney's female villains, Cruella de Vil, and remakes her as the heroine of her own piece. This film has to jump through a number of narrative hoops to pull this off, mind you, basically writing a whole new story whole-cloth (which is a pun that will pay off in a bit) that only vaguely resembles what was seen in the original 1961 animated film (let alone the 1956 book that movie was based on). But by letting go of the past and trying to create a new tale based on the bones of what came before, Disney crafted a film that was surprising, fun, and a heck of a good watch. And, what shocked me more than anything: I ended up enjoy Cruella a lot more than the big release from Disney this year, Black Widow

In the film we're introduced to Estella (played as an adult by Emma Stone, as a 12-year-old by Tipper Seifert-Cleveland), a precocious young child who, even from an early age, had a nasty little streak in her that her mother, Catherine (Emily Beecham), dubbed "Cruella". Estella, though, tried to be a good girl, the dutiful and sweet daughter her mother wanted, but that "Cruella" streak would often come out, leading her to get in trouble, again and again, at school. It got bad enough that she was eventually expelled which forced Catherine to uproot to two of them and move to London. All she needed was a bit of money, so she took Estella and their packed up car on the road, popping by a the mansion of a "client" to ask, presumably, for an advance. Seeing there was a party going on, and being wowed by the fashions on display (as Estella loved fashion), the child went into the party. Her dog got loose, this caused a ruckus, and Estella found herself chased by a trio of dalmatians out for blood. The ran past her in the garden, though, and ran smack into Catherine, sending her over a cliff to her death.

Fleeing to London (by hitching a ride on a truck), Estella ended up with a couple of petty thieves, the young Jasper (played as an adult by Joel Fry, as a child by Ziggy Gardner) and Horace (played as an adult by Paul Walter Hauser, as a child by Joseph MacDonald), where she fell into their gang with ease. The trio then spent the next decade stealing all they needed, living a comfortable life together. Estella, though, dreamed to be a fashion designer, to work for one of the big names, like the Baroness (Emma Thompson), and see her clothes on the runway. She gets a break, though, with Jasper's help, and this leads Estella to the life she always wanted. But when she learns that the party of the "client" was actually the Baroness's fashion debut for that season and that her mom might have actually died because of the Baroness (and not due to something Estella did), suddenly the nice girl is gone and Cruella comes out to wage a war against the fashion design maven. 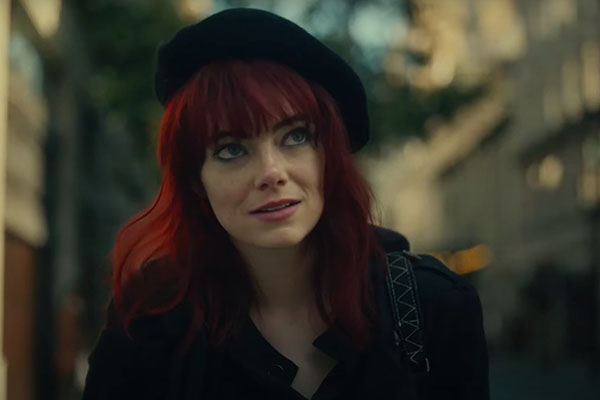 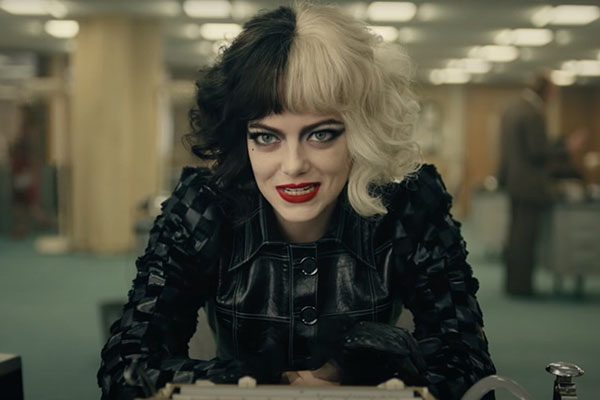 Let's be clear, Cruella is not a perfect film; there are any number of nits I could pick, from overly obvious music cues, to some of the narrative turns the film has to take to make this film resemble the original 101 Dalmatians (her mother is killed by dalmatians? really?), but in general the film holds together really well. That's in large part because it doesn't really bother trying to be 101 Dalmatians and, instead just tries to be a film about Estella/Cruella, her life, and her adventures.

Although it's a remake of 101 Dalmatians it feels like Cruella drew far more inspiration from a different source: The Devil Wears Prada. Cruella, in the original film, wanted to turn the dalmatians into a very fashionable fur coat, the the creators of this new take used that flimsy plot-device as inspiration to steep Estella deep in the world of fashion, to give her a tough-as-nails mentor (the Baroness), and to make the battle between these two fashion mavens into the main thrust of the film. It really doesn't have any resemblance to the original movie, but it works so much better because of it. Besides, Glen Close already starred in a live-action remake of the original film back in 1996 and we didn't need another of those films.

Part of why the film works so well is because of Emma Thompson. Although Emma Stone is great, finding a delicious menace to Cruella, Thompson absolutely steals the show. She clearly had an absolute ball playing the villainous heavy as she dives into the character with absolute charisma and dedication. This is the kind of character Thompson clearly always wanted to play and her work in the film elevates a character that, otherwise, would have been rote and one-note. It's honestly hard to think of an actress that could have done this part any better than Thompson.

The film is also lushly designed. The early part of the film tells us how good Estella is at fashion which we're just supposed to take her word for it, but then the film lets Estella unleash Cruella and the fashion comes out and it is a real stunner. The designers of the film had so much fun coming up with all the dresses, designing everything that Cruella and Estella wore and all the big designs that became part of her fashion "looks". This is a movie that lets the main designer actually showcase their work and it sells the idea that Cruella is a true rival for the top designer of the London scene. It's a stylistic treat that sells its world. 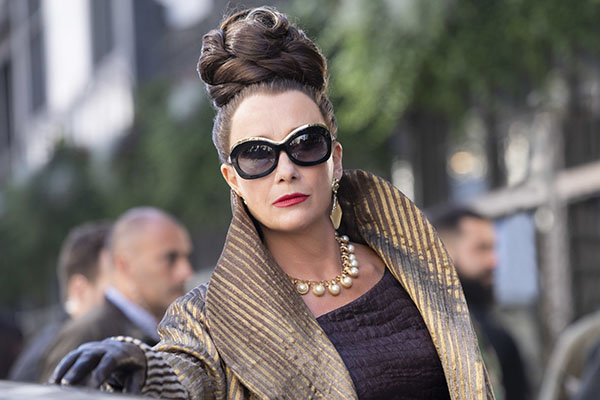 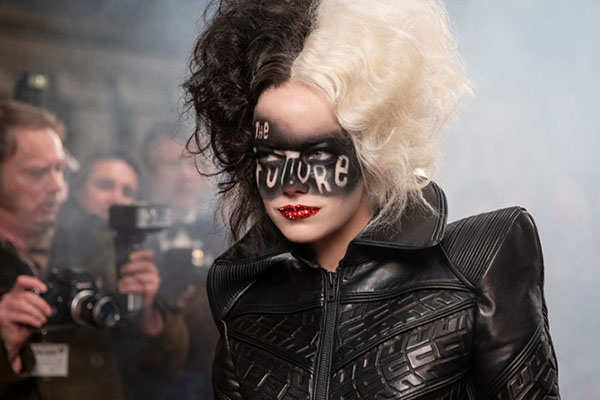 Yes, I'm sure some stuff in the movie is a bit anachronistic. The film evokes the 1960s era in fashion, design, and vehicles, and yet some beats (like playing "Car Wash" during one scene, a song released in 1976) seem rather out of place. Not every joke lands, not ever plot twist feels as twisty as it could, and the film does let the narrative make jumps and starts at times as characters just suddenly realize things to further the plot (the Baroness just suddenly suspects Estella is Cruella without any motivation for it, for example). And yet I didn't mind; caught up in the flow of the film I just enjoyed the fun of the ride. There were bits that bothered the back of my brain a little but they weren't enough to ruin the fun I was having.

And that's why I ended up enjoying this film so much: it was an unexpected treat. Black Widow was exactly what you'd expect from the Marvel Cinematic UniverseWhen it first began in 2008 with a little film called Iron Man no one suspected the empire that would follow. Superhero movies in the past, especially those not featuring either Batman or Superman, were usually terrible. And yet, Iron Man would lead to a long series of successful films, launching the most successful cinema brand in history: the Marvel Cinematic Universe. churn, a staid and proper "superhero film" for a character that needed something different. Cruella, which came out a couple of weeks before Black Widow, is something different: an off-beat film that suits it's off-beat character. It's a movie that understood what Cruella needed to be the hero of her own story and gave it to her with very few compromises along the way. If only more films from the House of Mouse could pull off this feat.