A Bout of the Beasts

The joy of a kaiju film is in the smashing of things while the monsters go "roar." Rampage, the arcade game from the 1980s knew this, and any child of that time period certainly saw the fun, cartoony monsters attacking buildings and smashing things good as they pumped quarter after quarter into the game. It wasn't a very deep game, but it did have its charms (and it was one of those rare arcade games at the time that allowed more than two people to play), so the game gained something of a following. 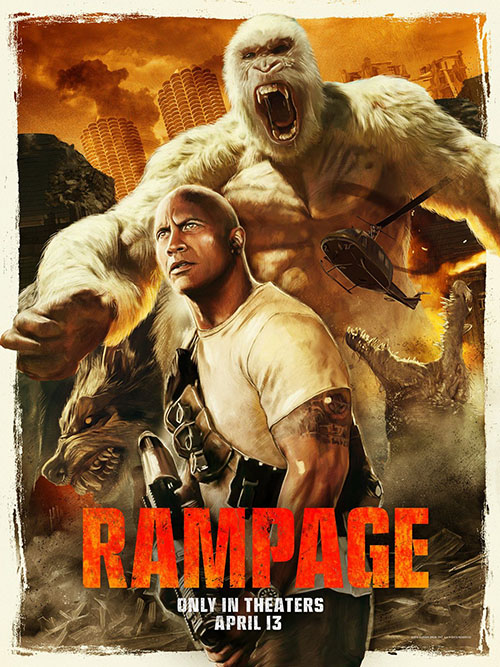 Of course, Rampage didn't really have legs as after you'd played a few rounds of a the game you'd essentially seen all there was to see. The Monsters moved from one city to the next, but the smashing remained more or less unchanged as they took down one set of buildings after another. Hell, with a big enough wad of quarters, Rampage was one of those games you could conceivably "beat" (whatever that meant in the original title) with little fuss. It had one thing, it did it, and then it moved on.

Or really, more accurately the games never moved on. Despite six games in the franchise (and multiple ports), every game is essentially the same. There's no plot to it, just various versions of monsters destroying cities, over and over, across all these titles and thirty years. To think that Hollywood would try to make a movie out of these bare bones is laughable... but then, Hollywood made a Battleship movie, so apparently nothing should surprise us.

In the movie Rampage, we're introduced to primatologist Davis Okoye (Dwayne Johnson) who oversees the primate reservation at the San Diego Wildlife Sanctuary. His favorite ape is George (motion capture performance by Jason Liles), an albino gorilla and leader of the apes at the sanctuary. Unfortunately, for George, and what sets the events of the film in motion, a space station run by bio-tech company Energyne, had exploded hours earlier, and in the debris that falls to earth are three bio-pod, each one containing a CRISPR virus that releases the second an animal touches it. Those animals being a wolf, a croc, and George.

Once the animals get the CRISPR in them, they start to change. They grown larger, get more aggressive, and, in the case of the wolf and the croc, gain biological advantages from other animals (like little gliding wings in the case of Ralph the Wolf). Energyne still wants the data from these CRISPR subjects, so they send out teams to try and capture the animals and, when that fails horribly, they set up a signal to draw the beasts into Chicago so they can be put down and studied. In the case of George, Davis isn't willing to give up on the ape, and thus begins a cross-country adventure to try and save George, stop Energyne, and prevent total destruction of the city of Chicago (where Energyne is headquartered). 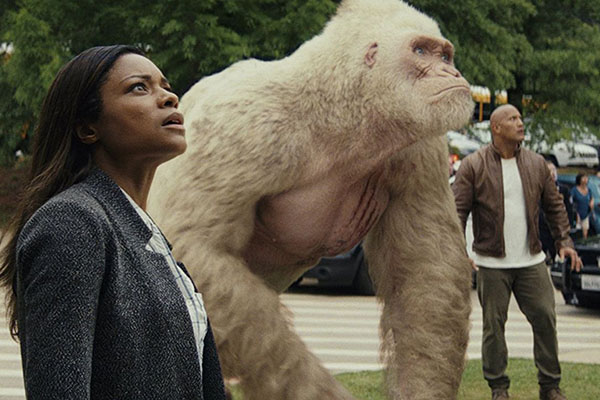 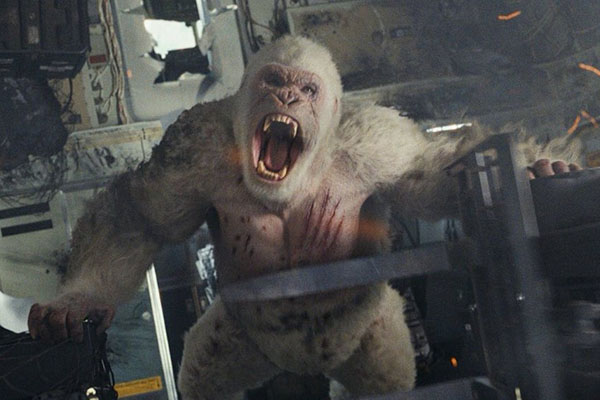 Let's be clear, Rampage is a stupid movie. Hell, it might be even dumber than the games that birthed it. It had one of the most superfluous villain plots I've seen in a long while, with an obviously evil company doing obviously evil things with no thought about trying to not be evil, or at least not get caught, all while The Rock goes though a generically The Rock-style adventure. It's dumb, in the broadest, blandest, lowest common denominator kind of way, which I guess befits the games its based on at least.

Part of the issue is that the actual villains of the piece are written out before the big climax that caps the movie. The two evil suits, brother and sister heads of Energyne Claire Wyden (Malin Akerman) and Brett Wyden (Jake Lacy), go about the process of trying to recapture the monsters in the most overt and dumbest way possible, only for that to blow up in their faces when (spoiler) they get eaten right at the start of the third act. From there we're set with the monsters and their back-and-forth battle for domination.

I would actually be okay with that if the monsters had any kind of development. George is the only one of three given actual character and personality, but of course he's given that since he's the "hero monster". The other two, Ralph the Wolf and Lizzie the Croc, are little more than beasts with interesting abilities. They look cool (for a certain, low-grade definition of "cool"), but because they're little more than monsters none of it resonates. It's creatures we don't know, smashing a city full of people we don't know, and that's somehow supposed to be propulsive and exciting? Hardly.

It feels like the same issue I had with the recent MonsterVerse films: those movies put the emphasis on the humans, which is fine, but then give us no real development of the monsters. Rampage does at least make George into someone interesting, and his dynamic with The Rock works well, but it's not enough to carry the film no matter what the production team might have though. The film's entire last act feels rushed and hollow because we just don't care about what's going on. 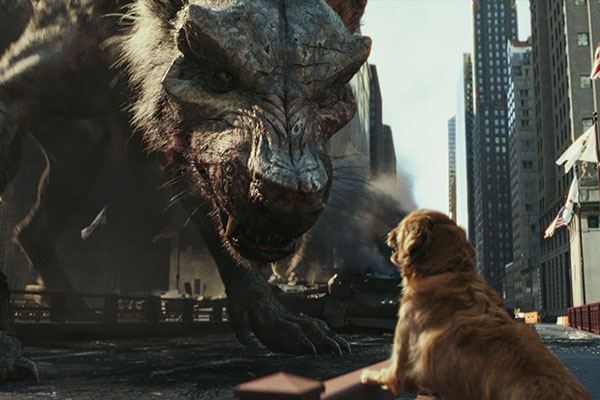 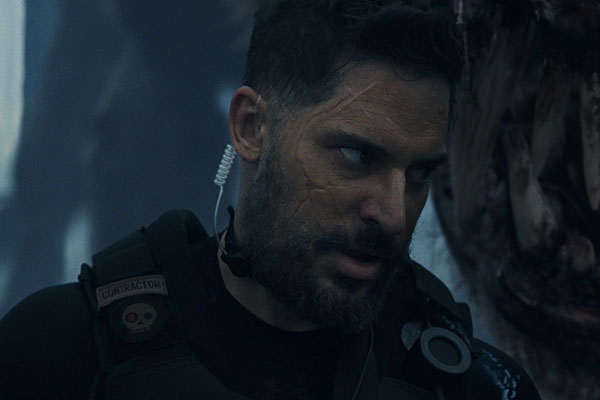 Not helping matters is the fact that the film feels cheap. The CGI in the film isn't that old (two years from the time of this writing) but it already looks like its aged a decade. When the monsters are smashing against each other it looks fine. Not great, mind you, but fine. It's not realistic looking in the slightest, and even Jurassic Park from decades before looks better, but it's fine. It's when real people (mostly The Rock) get stitched in that all the artifice gets stripped away. It looks like people running around in front of a green screen while bad CGI is stitched in (which, frankly, is what it is). It's just bad.

Yes, the actors do a fine job with what they're given, and The Rock can deliver a quip with aplomb even when he's phoning in a movie, but there's just not enough here to carry a film. It was enjoyable enough when the film played, but once the last reel came to an end (can we still say that about a digital movie?) I was already forgetting everything that happened. Rampage is a dumb, amusing movie while you're in it, but instantly forgotten the second you walk away. Which, sadly, makes it a perfect adaptation of the video game.