He's Super, Thanks for Asking

A lot of Mega ManIn 1987, Capcom released Mega Man on the NES, a game featuring a blue robot that fought other robots and took their powers (so that he could then fight other robots with those powers, and on, and on). The series went on to release over 50 games in 30 years and become one of the most famous gaming franchises in the world. fan games try to find some kind of special angle they can take with the source material to make their game stand out. What if we explain how Zero came into existence? What if we put the Street Fighter characters into Mega Man? What if we had Mega Man team up with other Robot Masters? What if Roll became as powerful as Mega Man? (That last one we'll cover soon enough.) 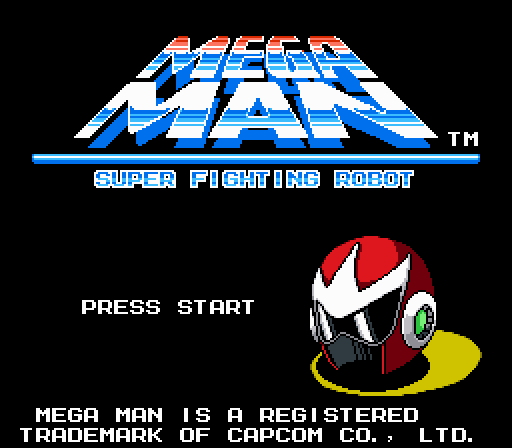 Rarer are the games that simply try to deliver a solid Mega Man experience, a proper iteration on the standard theme. There's nothing wrong with that, mind you: Capcom has been iterating on the same basic theme for twelve main games (including Mega Man and Bass) and counting. Taking on Capcom at their own game is a noble cause, and it's a challenge the game we're talking about today, Mega Man: Super Fighting Robot was willing to attempt.

At it's core Super Fighting Robot is your standard Mega Man game. Eight Robot Masters have risen up, seemingly led by Protoman (although obviously they're really being controlled by Dr. Wily) and Mega Man has to explore their eight stages, defeating them to take their weapons, so he can move on to the next, and then the next, and then the next, all for a chance to take on the big boss in their fortress and save the day. There aren't any special things you have to do -- no robots to save so they'll aid you, no partners to find or unlock -- this is just a standard Mega Man experience through and through.

And I happen think that's brilliant. By simply focusing on the core gameplay Super Fighting Robot is able to really focus on creating an interesting and fun experience for its players. And it does that well, with fun, colorful, creative stages not only in the early game but throughout Dr. Wily... I mean, Protoman's castle as well. That's not something even most of the mainline Mega Man games have been able to accomplish, making this a real feat for a fan game.

That's not to say the experience is without its flaws. While some of the stages are pretty neat -- Dagger Man with his teleports and twirling backgrounds, Soak Man and his interesting interation on a water stage -- not all the Robot Master stages are made equal. Coal Man's stage, for example, is just an underground play on Fire Man's stage while Axe Man hardly does more than give us Metal Man's stage again with some slightly different enemies. If the creativity apparently in some stages could have extended throughout the entire game, the whole package really would have sung. 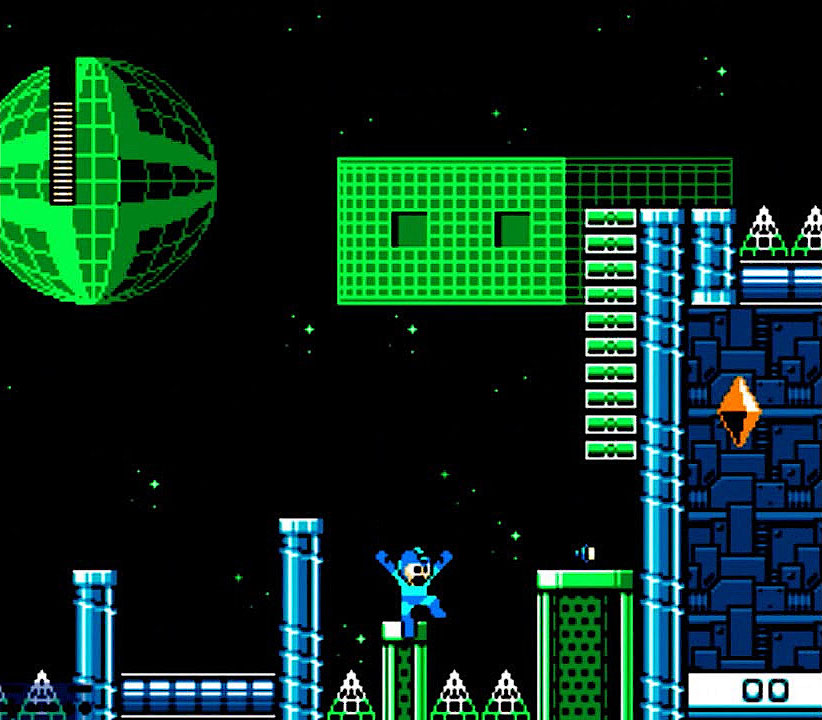 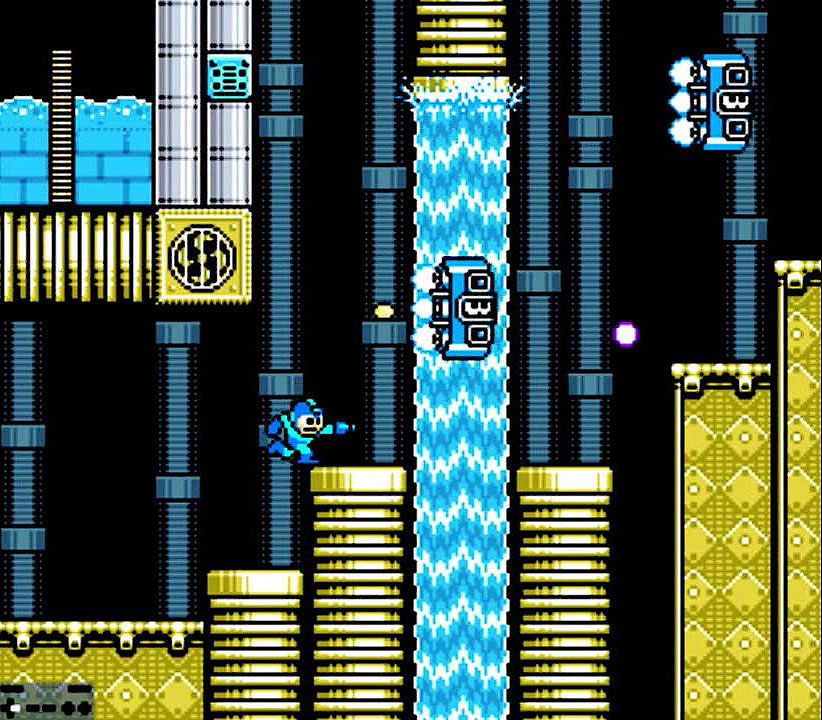 This is the first Mega Man game where I found myself enjoying the end fortress stages more than the main game. These stages have a diverse and interesting collection of challenges that don't just give us stuff we saw earlier in the game, mixed up and harder. Protoman Stage 2, for example, has a gun reticule that follows you around, shooting exploding blasts at you, pushing you ever onward. Stage 3, meanwhile, sets up complicated jumping puzzles around force beams, actually making these obnoxious traps interesting for once. And the last big stage, level 4, works in Gravity mechanics along with devilish traps, to really make you work for that hard-won prize at the end of the level. It's impressive.

What I also really appreciated was that the stages, and the bosses as well, didn't feel like hard-mode kaizon versions of the real games in the series. Too often fan games go in for "moar challenge!" upping the difficulty over the original titles under the thought that this is all fans want. As a player of middling abilities I much appreciate a game that goes for creativity of challenge, one that makes me work some but does slap me in the face over and over for daring to even attempt it's levels. This is a game that lets you sink in and enjoy the experience without punishing you over and over again so you, "git gud!"

Also nice is that fact that the game features a whole host of bonuses and challenges to unlock via a series of collectable discs hidden throughout the game. Some of these are the ones you'd expect, like special armors, more powerful guns. Then you get the special challenges, starting with things like battling a Bass or Dr. Light, before moving on to special challenges such as Simon Belmont and Shovel Knight. The range of challenges, and the amusing ideas included within, really add to the overall experience, making this quite a fun game through and through.

Still there are things I really would improve to make this game as good as it could be. The Robot Masters, for example, seem pretty darn random, with none of the thought of theming of games like the original Mega Man or the more recent Mega Man 11; it feels like they pulls random objects and adjectives out of a hat and said, "yeah, I can work with these." Their special weapons, too, aren't all that great, with a couple of decent weapons to use over and over and a lot of middling weapons with only a few good contexts to use them. The game needs a bit more diversity, a little more thought, to really make the main attraction, the Robots and their weapons, perfect. 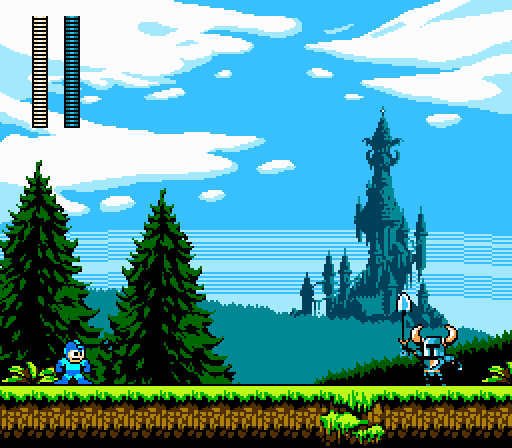 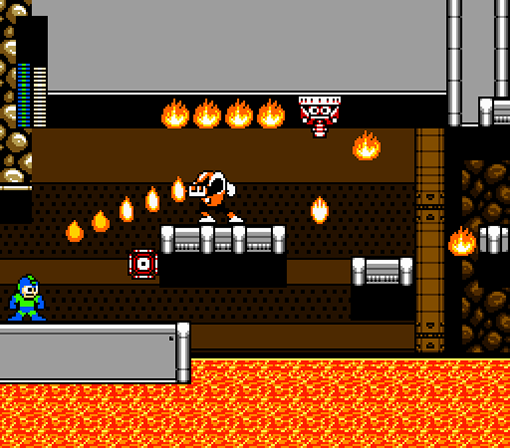 Still, this is a game that really comes together as a whole and presents a proper Mega Man package. It's a solid enough experience, with enough good ideas, that it actually easily ranks higher than some of the main entries in the series. And this is a free-to-play fan game, remember; that's what really makes it special. This is a labor of love designed by a fan and it turned out this good. Even with its flaws, Super Fighting Robot is truly a special experience.