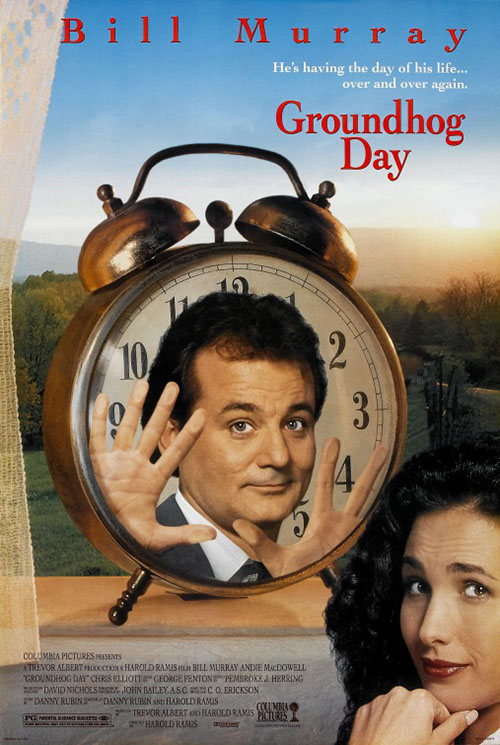 The basic construction of the movie is simple: Phil Connors (national treasure Bill Murray) is a misanthropic weather man who hates -- truly loathes beyond all reason -- the annual Ground Hog Day Celebration in Punxsutawney, PA. As you probably know, every year the groundhog, Punxsutawney Phil, will emerge from his little hollow (or, really, get yanked out a cage for the celebration) and if he sees his shadow it portends six more weeks of winter. It's dumb (as Murray's Phil points out repeatedly) but the celebration is fun and silly. Phil hates it, so after the event itself is over he flees to the news van to head home, but they get trapped in Punxsutawney by a giant blizzard.

Trapped in a place he considers Hell, Phill is a dick to everyone, spends the night being grumpy, and then goes to bed praying the snows will be cleared by the next day. But instead of being able to go home on February 3rd, Phil discovers the next morning that it's February 2nd all over again. He's stuck going through the same day, clueless as to what's happened. And then the next day, which is also February 2nd. And the next. And the next. On and on for months and months (at least if we count only the days shown in the movie) but probably more like tens of thousands of years. Phil is stuck in this town and, with nothing better to do with his life, he eventually focuses inward on correcting himself. He's got all the time in the world so why not make the most of it?

Groundhog Day is at it's best when it's focused on Phil, letting Murray do his thing as a character that's, really, not to dissimilar from any other character he's played. Phill is as much of a cad as Venkman in Ghostbusters, as much of a slacker goof as Winger from Stripes. That's not a knock on Murray because, when he's in the comfort zone, allowed to just play his kind of character his way the actor is able to create comedy gold. He can devote himself fully to the manic, comic beats as well as the melancholy and darkness of some scenes, and make it all feel like the same character. It's a strong performance that runs the gamut, a real feat for any actor.

The movie isn't quite as strong when it devotes time to Phil's love interest, Rita Hanson (Andie MacDowell). Rita is barely a character, a cute, almost manic pixie dream girl (before that term had really been solidified) who is defined more by her big energy and collection of ticks than any realy story for the character. A lot of that does stem from the fact that Rita is part of the loop, reset every day along with the residents of the town. Only Phil gets to go from reset to reset with the memories of what came before so, unlike Phil, Rita doesn't get to grow or change at all. Who she is at the start of the movie is exactly who she is at the end of it. 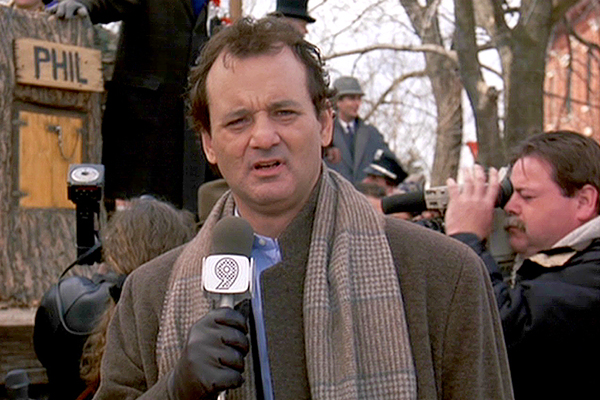 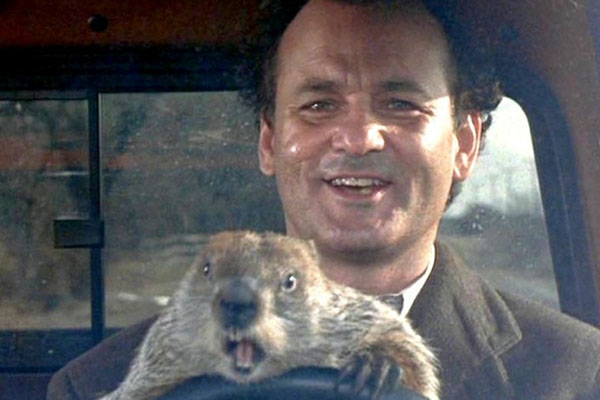 There have been timeloop productions that have come out since Groundhog Day that find ways to evolve the other characters in the film or show. Daybreak, for example had characters around the hero change their attitude and actions based on certain key events from the previous loop. Groundhog Day, though, coming before most of those works (that admittedly tried to evolve and espand what the time loop trope could do) had a more limited focus, keeping everything tightly worked around Phil. It's great for his character, naturally, but it does limit everyone around him.

Not that I'm a big fan of MacDowell's Rita. Her lack of a character hurts her, sure, but the actress's performance doesn't thrill me, either. There's something shallow about the way MacDowell plays Rita, flighty and basic. The script could give her more to do, invest in her character more, but the same applies to the actress -- some are able to do a lot with a little, creating a depth to a character that's flat in the page, but it's always felt liek MacDowell played Rtia exactly as she is on the page and never gave her anything more.

The one thing Rita actually contributes to the movie (aside from being a prize for Phil at the end of the movie) is that she sets the whole plot of Phil's evolution into motion. When prompted, Rita tells Phil everything she wants in a man -- modesty, musical talet, good with kids, etc. -- and then, when Phil decides to change and become a better person (because, again, what else is he going to do?), he runs down the list of all her wants and becomes the person she desires. It's sweet, in a way, if you see Phil's evolution from one "day" to the next.

It's weirder, though, if you look at it from Rita's perspective. One day he's a dick (the day he first meets her), then the next day he's amazing, like a light switch was flipped. It's less weird, I guess, than if Phil was going after a woman he'd known for years who suddenly saw a guy she detested become everything she ever wanted. Even with all the time in the world, though, it does feel a little stalker-like in places (especially when Phil spends day ater day trying to woo Rita the same exact way over and over, evolving his tricks just slightly each time). 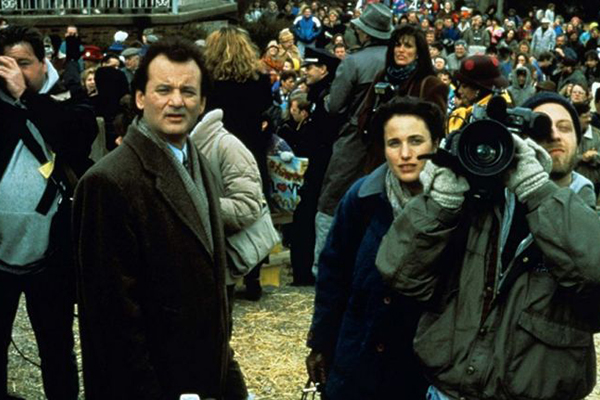 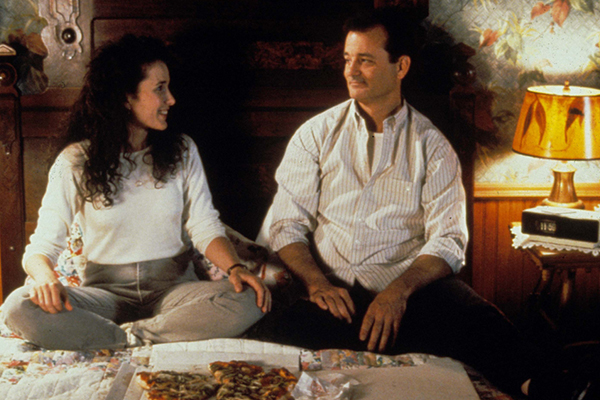 I guess that's part of the evolution for Phil, then? Realizing he can't just force things to go his way, that he has to earn it slowly, over time, until the world finally lets him have what he wants (because he became a better person to earn it). Phil really becomes a different person by the end of the movie, someone worthy of Rita (in the film's logic) so that, finally, the loop ends and he can move on with his life. He's so happy to see her the next morning, in his bed, when everything had changed. He's a brand new Phil and life is great.

Although, man, he's going to be completely crippled in the next day when he realizes he doesn't know how every little thing is going to work out. It's a brand new day and Phil it probably going to be more lost than anyone else.