Oooh, Hell is a Place on Mars

Let me ask a serious question: is anyone really hankering for a Doom film? I don't mean to denigrate fans of the original films -- I played many an hour in the original two games in the series back when they came out, enjoying my subversive time shooting demons and splattering blood everywhere. The simple fact is, though, that that charms of Doom are very much a solitary experience. It's you, exploring a Mars station, killing demons in tight hallways, always worried about what's around the next turn, pushing forward to the next big encounter, the next boss, the way out. That's Doom at its core. 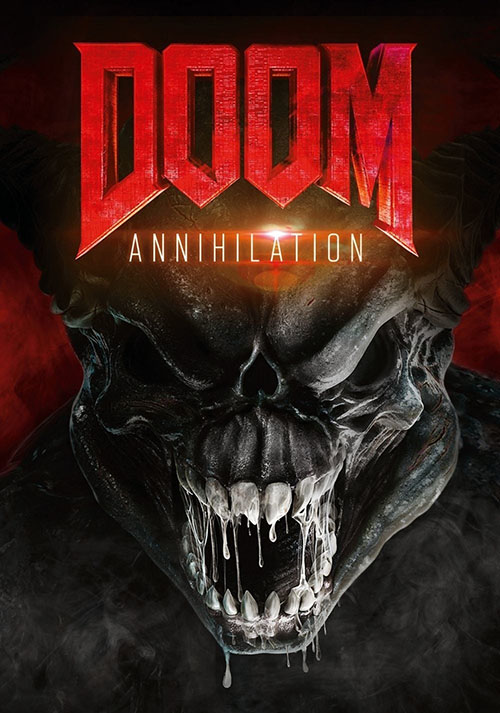 Movies don't work that way, though. A first-person shooter will put you in the starring role, but a movie, simply by the way it's filmed, has a different perspective. You're no longer in the eyes of the protagonist (well, unless you're watching Hardcore Henry) and you don't have any control over the events. No matter how much a movie might want to adapt Doom, it's going to fail at the experience. It's going to need a plot, and characters, and things other than you, guns, and demons. That's just a simple fact of the nature of the medium. That's why the 2005 Doom film failed (among other reasons), and it's a hurdle the new adaptation, Doom: Annihilation is never able to overcome.

To be fair, there's a lot that's wrong with Doom: Annihilation -- characters, story, effects, budget, acting, and on and on -- but the biggest issue is simply that the film doesn't understand its subject matter well enough to give us something in the proper spirit of Doom. The film tries to give us a convoluted plot (plot? in Doom?!) and then misses all the other parts of the series that actually would be enjoyable to see on screen. It's a very safe, very cheap little action flick but it lacks any gusto, ending up feeling about as far removed as you can get from Doom while still having the name.

So apparently the universe is dotted with gates, portals from one place to another, that can be opened and used by anyone willing. One of these gates exists on Earth, another on Mars, and a group of scientists, lead by Dr. Malcolm Betruger (Dominic Matham), plan to test the gates by sending a volunteer through. While the volunteer makes the journey, it's hard to say he did it safely as he returns crazy and just a bit deformed. And then all Hell breaks loose. Meanwhile, to protect these gates, a group of Space Marines, lead by Cptn. Hector Savage (James Weber Brown) and Lt. Joan Dark (Amy Manson), is sent to Mars. When then get to the base, though, they of course find it in lock-down mode. The marines have to infiltrate the base, find survivors, stabilize the base operations, and see just what happened. But they're in for the fight of their lives with all the monsters that they're about to meet.

It's hard to review this movie without picking everything apart, so let's just start at the beginning and really savage this film. For starters, the movie predicates its entire plot on the assumption that, after finding these gates and, somehow, figuring out they can be traversed, instantly, the first instinct of the team is to shove through a human volunteer. Not a monkey, or a dog, or, you know, a robot with a camera and a screen so they can see what the transition is like and if there are any unforeseen circumstances mid-transit. No, they throw the scientific method, and good medical research standards, out the window and jump right to the conclusion. This is the opening plot point of the movie, mind you, and you don't have a story without this first part being true. So Doom: Annihilation stumbles right out of the gate. Great work there, producers. 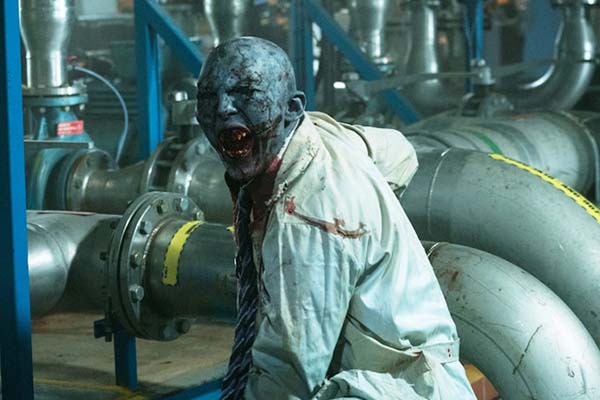 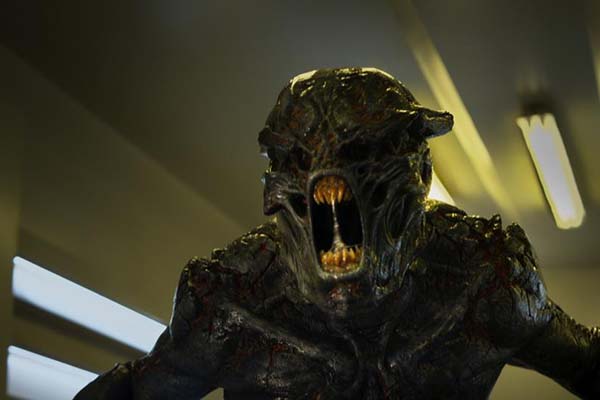 Assuming you can ignore this, though, we then have to contend with the fact that our "heroes" in this piece are a lackluster bunch of idiots. All of them are universally bland, actors chosen for this looks and not their ability to act tough, or scared, or at all. That does include lead actress Manson who gives a thoroughly underwhelming performance here, bored and tired through most of the movie and not someone we can grow to care about at all. Hell, even the villains of the film (which I won't spoil since this film only recently came out) are terrible, giving none of the style of gusto you'd expect from a heavy in a horror flick.

Not that Annihilation is much of a horror flick. At it's core the film is basically the 2002 Resident Evil just minus all the style and fun that movie managed to have with the subject material (seriously, if you swapped out zombies for possessed humans, you'd have the same movie). The film telegraphs all its scares, never finding an original idea or cool way to stage all its action moments. Everything in the film boils down to: run into a room, get attacked, some of the people make it out, everyone else dies. It's not scary, at all, and it's also not gory (something that can perk up a horror film even when the scares are lackluster). This film cheaps out on everything, including the scares and the splatters, making for a very bloodless and tedious Doom.

I don't think it'd be that hard to make something that honored the spirit of Doom even if you really can't adapt the tight, focused gun-play of the original. If you had one character, trapped in a base after it shut down, perhaps with a comm unit tied to the central A.I. that was guiding them, chased by scores of demons, then you'd have a setup that would work. Add to that enough gore to make any horror film buff happy, gore like you'd get in the Evil Dead series or Dead Alive. Our hero, guy or girl, should get increasingly strung out and wounded (like John McClain in Die HardThe 1980s were famous for the bombastic action films released during the decade. Featuring big burly men fighting other big burly men, often with more guns, bombs, and explosions than appear in Michael Bay's wildest dreams, the action films of the decade were heavy on spectacle, short on realism. And then came a little film called Die Hard that flipped the entire action genre on its head.), but the film can't let up. It has to keep pushing forward, keep moving our hero to their final confrontation. That's a film that feels worthy of Doom, like it understood what it takes to adapt this source material in a meaningful way.

What Doom shouldn't be is a mash-up of Resident Evil and Aliens. This film was created because the director, Tony Giglio, had a "great idea" that he pitched to Universal... which they immediately rejected. It was only because the fourth game in the series came out after that pitch and did really well that Giglio was able to re-pitch Annihilation made. Personally, I wish Universal had stuck to their guns and refused to make this movie. That was the right choice, clearly. 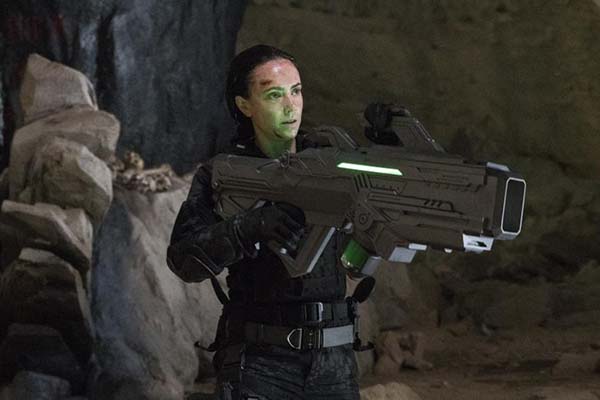 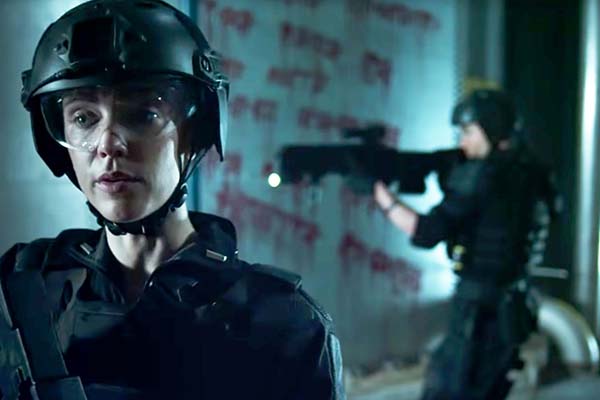 While Doom: Annihilation has a lot of the elements that you'd expect in a Doom film -- demons, Hell, marines, guns (including the BFG), key cards, and lots of shooting -- in just about every other way it fails. It doesn't just fail as a Doom film but also it fails to be a good movie at all. It's a scrappy attempt, to be sure, but there's just not enough here make for an enjoyable experience. Do yourself a favor and skip this movie; if you really want more Doom in your life, go back and play any of the games as they'll have more of everything you want without all the pointless bullshit.