A Trip Into Fairy Tales

Okay, I have to admit that I'm not a huge fan of the DiscworldAt first blush, the Discworld series seems like just a parody of fantasy literature. Dig into any of the books, though, and you'll find deep and funny tales of a world just slightly off from our own. A world that, yes, is a flat disc carried through space on the backs of four elephants that, in turn, ride on the back of a giant space turtle. Witches books. Although I did enjoy Equal Rites for what it was, I've never really been hooked by the Witches books the same way I was with Death (Mort and Reaper Man) and the Night Watch (Guards! Guards! so far into our dive). Something about those other books, the way they come together, has always seemed to be missing from the Witches. 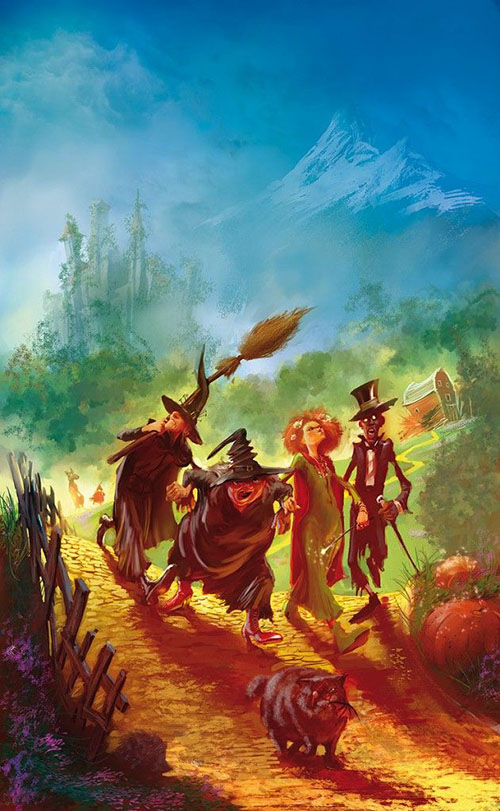 That might have something to do with the characters themselves. Witches Abroad, as with Wyrd Sisters, focuses on the coven trio of Granny Weatherwax (who also appeared in Equal Rites), Nanny Ogg, and Magrat Garlick. On their own, I like each of these characters, but the books don't tend to treat them well. Granny, for starters, is a total god-mod character. By that I mean that there really isn't a situation that the stories throw at her that she can't get out of, and usually in some overpowered way we've never seen before. Some would refer to her as a "Mary Sue" which I don't think is a term that really applies to her -- she's the central heroine of her own story, not one thrown into a preexisting world, and very often people don't like her. That said, there are some parallels with Granny and that trope, most specifically that she can do anything, no matter what.

Nanny Ogg is honestly the best and most fully realized character of the trio. A loud, brash, and sassy grandmother, Nanny says her mind and makes jokes of everything. She plays foil to Granny's straight (wo)man routine and helps to had levity to the situation. That said, Nanny doesn't really ever do much of consequence in the books. While she might discover a clue, or set a plotline in motion, it's always Granny that actually handles the dirty work and finished the task. Nanny is there to help the team, but it's Granny that takes everything the last five yards.

Still, both of them shine brighter in these stories than poor Magrat Garlick. The youngest of the three witches, Magrat is relly just starting out, trying to be a different kind of witch from Granny and Nanny. She's more New Age-y but also unsure of herself, a love child flibbertigibbet, and the other two witches tend to critisize her for everything she does, all her weird notions and warm, fuzzy feelings. But then, the book tends to crap on her as well, treating her like dirt and always pointing out her flaws in the worst light. Despite her being one of the three heroes, the books honestly seem to hate Magrat. It's so weird.

Witches Abroad picks up some time after the events of Wyrd Sisters (a parody of Macbeth with elements of King Lear and Hamlet mixed in), we move on to the world of Fairy Tales. When another witch in the area (who was also a fairy godmother) dies, she passes her wand onto Magrat knowing full well that the other two witches would get involved and all three would end up taking over the wand. This is specifically in service of a young woman, Emberella, who is being pulled this way and that by her "good" and "evil" godmothers -- without the good one around anymore, the evil one would have full control over Ella's life. So the witches have to fly to the newly introduced city of Genua (a bit of France, a lot of New Orleans) to be the new "good" godmothers and free Ella, her friends, and the whole city away from the evil godmother... who also happens to be Granny's long lost sister.

Although I have my misgivings about the characters -- the three heroines of this book are basically unchanged from the previous novel, having not grown one bit since Wyrd Sisters -- I did rather enjoy the setting and story of this novel. Genua has a lived in feel to it, a fully realized city with a strong presence in the novel. Sure, maybe it's not as richly detailed as Ankh Morpork, but then that city has appeared in several novels at this point while this is the first (and last for a least a while) for Genua. To be able to get this city in, having it come to life, and show all the various factions at play in the span of a single novel is a great accomplishment.

Removing the witches from their homes in Lancre and forcing them out into the world also puts them on different footing than they're used to, leaving them to find new solutions to their problems. Witches aren't common outside their realm so the three ladies to command automatic respect in Genua the way the do at home. Things don't come as easily which does force the witches to adpat and improvise. This part I enjoyed, the idea of stripping away some of their power to make them more vulnerable, to find nuance in the characters.

Then there's the fairy tale trappings, which are used here to show a dark story you wouldn't expect from the "Happily Ever After" trappings. Having Genua be under the thrall of the evil godmother, herself using the fairy stories to control the city and amplify her own magic is neat. The book explains about how stories have power and that if you use a story it can become it's own force. This is an intriguing idea that the book explores a few times, really tasting the concept as it rolls it around.

That said, the book never quite comes together for me the way I'd like. For starters, by the time the novel ends the ladies are basically back where they started, relatively unchanged. There's not a lot of growth in the story at all, no real throughlines for the characters here for them to evolve. There are side character, like Ella and the evil godmother, who have their own stories, their own beginning, middle, and end, but the main witches don't get that treatment. Aside from going to Genua (and then eventually going home) it's hard to say that anything really even happens to the witches during the story.

Well, and the ending of the novel kind of falls apart, really. There are all these powers, all these factors coming together at a big ball for Ella (because these stories always end in a ball), but then Granny just basically short-circuits everything, takes control, and uses her own abilities to solve the problem. Magrat and Granny stand on the sideline (this despite the fact that Magrat is the one with the godmother wand) while Ganny does all the work and, quickly and with very little real explanation, shuts the whole show down. Right when the novel is getting really good, it ends.

There are a lot of great ideas in Witches Abroad, but the book just never comes together for me. I don't hate the leads but this book doesn't do a good job of selling them to me as a group. In the end, if I can't get behind the heroines I can get behind the book. Its fun and funny in places but just not a satisfying whole.