It's a Wonder This Book Was Published

years ago (probably in 2012 when the book was released) I picked up the novel Seven Wonders. The cover was bright and interesting and the description on the back of the book actually made it sound cool, sort of a Justice LeagueThe premiere team at DC Comics, their version of the Avengers (which actually came before the Avengers and, really, has existed in some fomr since the early 1940s), the Justice League is the team-up to end all team-ups, featuring some of the most popular, and longest running, characters in all of comics history (and also Booster Gold). versus an evil BatmanOne of the longest running, consistently in-print superheroes ever (matched only by Superman and Wonder Woman), Batman has been a force in entertainment for nearly as long as there's been an entertainment industry. It only makes sense, then that he is also the most regularly adapted, and consistently successful, superhero to grace the Silver Screen., just with a new hero showing up to shake up the world order. That's a cool concept in theory -- we get a lot of tales of, "what if SupermanThe first big superhero from DC Comics, Superman has survived any number of pretenders to the throne, besting not only other comic titans but even Wolrd War II to remain one of only three comics to continue publishing since the 1940s. went bad?" but far fewer ones about Batman. I took the book home, started to read it, and then within a couple of chapters set it aside and didn't touch it again for nine years. 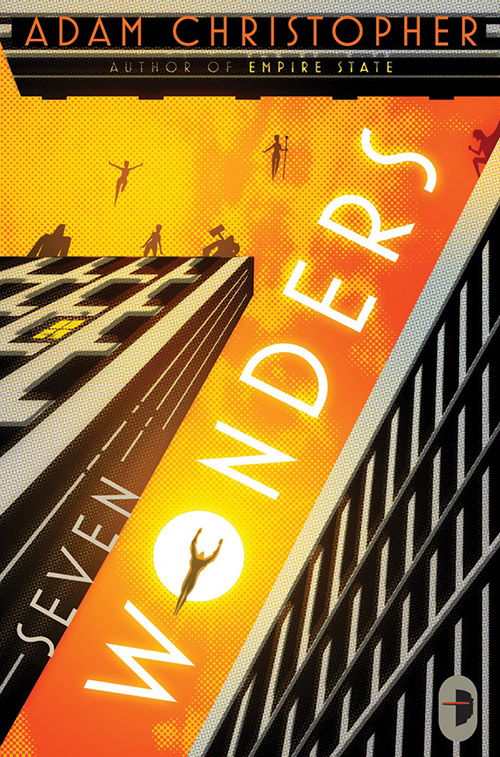 The reason is simple: Seven Wonders is a bad book, and back in 2012 when I tried to read it the last time I didn't have a website (like Asteroid G) to review the stupid thing. It sat in a pile waiting for a day where I'd notice it again and have a blog I could spew out about it, and finally, after reading a bunch of other stuff I wanted to get through first, I had to sit down and crank out this novel. And, woof, it was just as bad as I remembered.

The setup for the novel does have promise. Tony Prosdocimi is a normal guy working as a stock boy for a Best Buy-like joint in San Ventura, CA (a fake place but slot it in somewhere between San Francisco and L.A.). The city is supposedly protected by the Seven Wonders, a group of heroes -- Aurora, the Nuclear Man; psychic Bluebell; Sandcat, who can turn into holographic animals; Linear, the fastest man alive; the alien Dragon Star; Hephaestus, the Greek Weaponsmith, and his robot SMART -- but most people (at least Tony thinks) are terrorized day and night by the dark avenger The Cowl (and his side-kick Blackbird). Tony lives in fear every day... at least until he starts to develop powers of his own.

Soon enough he's out on the streets, patrolling, looking to take on the Cowl with his own powers and free the city as its newest hero, the Justiciar. But absolute power corrupts absolutely and soon Tony finds himself treading over that line between good and evil, perhaps even going on his way to dethroning the Cowl and becoming the Cowl II. His girlfriend, Jeanie, seems all too willing to help him, too, because, as he soon finds out, she's secretly Blackbird. What she wants, how it ties into the Cowl, and what the Cowl had really been up to all along could very well mean life or death for Tony, San Ventura, and the Earth itself.

So let's be clear: there's a lot wrong with Seven Wonders, but the greatest sin the book makes is that it doesn't invest in anything at all. We have what amounts to four P.O.V. characters -- at times Tony, Jeanie, the Cowl, and one of two detectives working the Cowl case, Sam -- and we barely ever learn anything about any of them while we're in their heads. Tony has the most development, getting a few early chapters that let us know what's going on with him. Once he starts developing powers, though, the book starts caring about his internal drama and instead focuses only on external factors. Tony effectively stops being a character and just becomes and action figure for the writer to play with, just like everyone else in this novel.

Certainly the titular heroes of this book don't fare well under the writer's gaze. They're only ever presented from the perspective of a bunch of characters that hate them so we only get descriptions about how smug they are, how they act like they have the city's best interests at heart but never bother actually doing anything. This would be fine if the twist was that the Cowl was actually a hero and the "heroes" were actually villains, but no, the novel eventually shifts so that the Seven Wonders have to protect the Earth from a real threat and, lo-and-behold, they step up. Keeping them at a distance makes us hate them where, if the novel would have even given us just a couple of chapters from the perspective of any of the heroes (from the few interactions we have, Linear seems like a fun guy and would have been a good one to get some internal thoughts) our whole opinion of them would have been shaped differently.

Were this novel a comic instead of prose, with illustrations we could see so we could make our own decisions about who was good or evil, who was acting right or not, maybe the way the book presents things could have made sense. It certainly reads like a script that was hastily turned into a novel at some point during it's life. Perhaps it was a spec script and no one wanted to touch it so author Adam Christopher reworked it, but however this novel came about it's pretty clear the author doesn't care about developing characters, he just wanted to do situations and twists.

In the span of the novel Tony goes from normal guy to powered guy, hero and then villain and then something else and then hero again and then villain again. Blackbird goes from loyal ally to the Cowl, then antagonist to him, the some sort of ally again. The cowl goes from big bad to noble hero with the snap of some fingers. And all through this no one ever actually talks, or thinks, about anything that actually lets us understand why. We need more from these characters, we need descriptions that actually let us into their sense of self and what's going on with them, their motivations and their desires. None of the characters here have any of that so we can never get why they do anything, let along why we should care about it.

Meanwhile, the actual heroes are never even fleshed out enough that we understand just what they can do and what their limits are. Aurora is essentially the Nuclear Man from Superman III, just without the limitations of that inferior Superman villain. From everything we can see he has no weaknesses, but we also don't ever learn what exactly he can do. He's strong, he's fast, he can fly, and he has nuclear radiation that comes off him (safely) that can turn suddenly very hot (and very unsafe). But when he gets into a fight in the novel it's either an easy contest for him, because he's so powerful, or he's suddenly laid out without any explanation as to how. And it's like this will all the heroes, villains, and everyone else in the book.

There's a telling moment late in the book, when a new, bigger villain is revealed and their minion, the Living Dark, comes to Earth. A fight breaks out between the heroes and villains, one of them powers up to launch an attack and then... cut to black. Our P.O.V. character is knocked out and when we next are awake it's been two days and the fight (that seemed unwinnable) is already over without any explanation as to how. That's this book, over and over again: interesting situations that are setup but the author doesn't actually care about them, he just wants to move on the whatever the next scene is with little considering for characters, storytelling, or audience interest.

This book would be an absolutely and total wash were it not for one small thing: late in the novel, as the heroes prepare to take on the big threat behind the big threat behind the big threat (ugh), all the various retired superheroes from around the world from to the Seven Wonders' moon base to join the fight. The author finally gets to let loose, as if this was the part he was waiting for (oh, 300 pages in), and he gives us a list of all kinds of superheroes and their teams. Certainly the best is Lady Liberty and the Presidents of the United States. She's a powerful... something (that part isn't clear) but years earlier she'd been kidnapped by aliens and forced to make exact replicas of the presidents on Mount Rushmore, which she does with perfect accuracy (other than the fact that they're robots). Each of them have their own superhero name (like Teddy Roosevelt is Teddy Robotic, or T.R.), but the best is Absolute Lincoln.