Simba, You Must Get Out of This Film!

A little while back I watched (and, of course, reviewed) the 2019 Aladdin remake from Disney. While I didn't think the film was necessary -- was anyone asking for a remake of an animate movie that held up just fine even now? -- it was good for what it was. It was a largely faithful adaptation of the Disney original that added a few new things to the film (Will Smith instead of Robin Williams being the big factor) but didn't deviate far from the source. 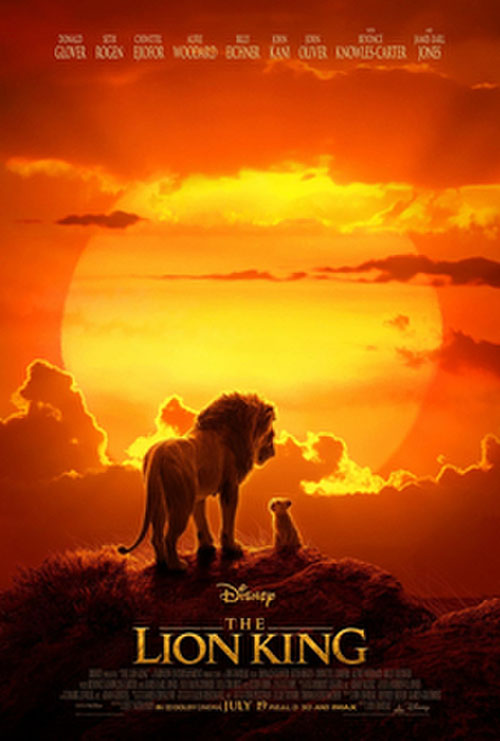 Disney, of course, really wants to capitalize on their back-catalog of films so they can continue to rake in money. It's not just a lack of new ideas, although that is at least a little bit at play, but they have a media empire built on these products and releasing a new version of an old film, like the 2019 Aladdin, allows them to capitalize on the film up and down their product chain. New versions of old toys, new releases of old films, and they can bring interest back to the theme parks again without having to reinvent an entire area or build something new. It's a repurposing that, I'm sure, works for their bottom line.

And it's not as if the new crop of remakes come out of nowhere. We did have the live-action remake of 101 Dalmatians back in 1996 that proved remakes of the old animated films could bring in mad cash. And then there was Maleficent, the re-imagining of Sleeping Beauty told from the perspective of the villainess. That one was actually pretty creative, refocusing the story and finding a new spin to retell a, frankly, rather slight original. Sometimes the Disney machine could crank out something interesting within the tight confines of their formula.

But then we get to the 2019 The Lion King, which easily proves just how far off the rails a project like this can go. The 1994 original is a classic, the height of the "Disney Renaissance", and a true animation masterpiece. It's been one of my favorite Disney animate films for the longest time, and I know many other kids that grew up in the 1980s and 1990s have the have opinion. It's doubtful that any kid growing up today can possibly avoid seeing the animated original so, more than just about any other remake Disney has made so far, I have to wonder just who this movie is for? Was there a great need, beyond trying to squeeze more money from the stone, for a new version of The Lion King? That's especially when we have to put "new" in quotations because this is hardly a new film at all.

If you don't remember the original somehow, we meet Simba (voiced this time by Donald Glover), the young heir to the lion throne. His father, Mufasa (once again voiced by the iconic James Earl Jones), is the leader of the lions, residing at Pride Rock, the center of the savanna. All of the animals respect the lions as the large cats can be trusted to oversee, and guide, this small bit of African paradise. That said, there is one lion not happy with this arrangement, Scar (Chiwetel Ejiofor), brother of Mufasa who has designs on the throne. He just needs a way ti engineer the downfall of his brother. 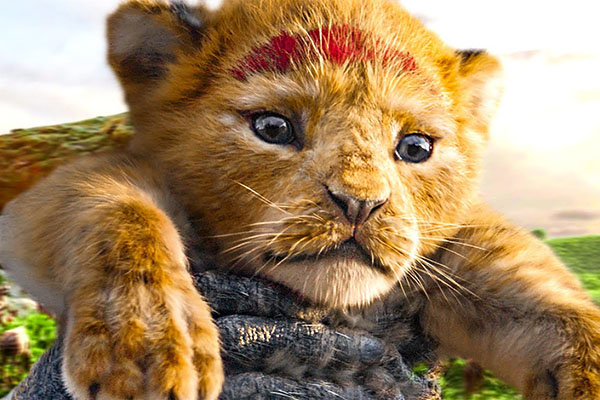 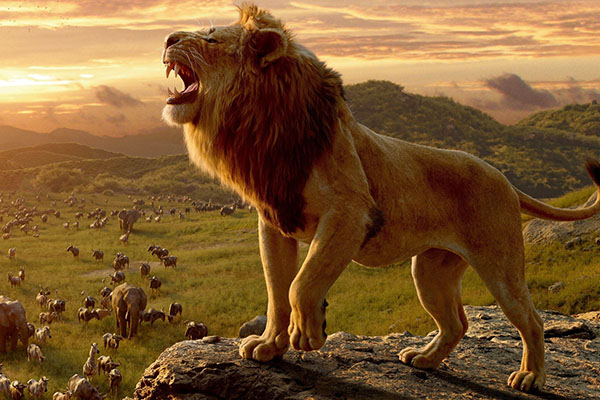 As it so happens, Scar is easily able to gain the trust of the naive Simba and, soon, gets Simba in a position where he's likely to be killed by a stampede of antelopes. Scar then runs to Mufasa to report about the "tragedy", and Mufasa goes running in an attempt to save his son. Young Simba survives, Scar manages to kill Mufasa in the event, and Scar blames Simba for it. In his guilt the young lion doesn't know better and runs off, fearing what his pride would do for his killing the king. So the lion cub ends up with two friends, warthog Puumba (Seth Rogen) and meerkat Timon (Billy Eichner), and the three grow up together and live a happy life away from Pride Rock. But with the reign of terror Scar has caused, Simba eventually has to get over himself and head home to face his murderous uncle and save the kingdom.

If that all sounds familiar, well, it should -- the movie is, quite literally, beat-for-beat the same as the original film. While the new movie is 30 minutes longer, you'd be hard pressed to tell where that extra time comes from as it really does feel shot-for-shot. The few changes they make, like altering Scar's big song "Be Prepared", are a detriment to the film, but more often than not the two films could be transposed over each other and you'd hardly be able to see a different in story or scenes.

The biggest change, and the most welcome relief, is in the dialogue of the two sarcastic friends of Simba, Timon and Puumba. As voiced by Rogen and Eichner, it's pretty clear these two were allowed to punch up their lines and make them sound more like their own humor. This is just about the only time the film deviates from the original script and its great because the humor is new, the moments are fresh, and it all kind of clicks together. These short scenes, though, are few and far between. More often the movie goes for a literal interpretation of the original, just making it look "live action" instead of hand-drawn.

Let's be clear: this film is 100 percent an animated movie. While it looks live-action, and thus can be considered "of a piece" with all the other live-action remakes Disney has made, there is nothing in this film that's actually real. Even in comparison to director Favreau's previous Disney remake, The Jungle Book, which had one live kid in the central role so it could be charitably considered "live-action", this film is all done on computers without anything real anywhere. It's animation dressed up like something more, but it ends up feels far more fake. 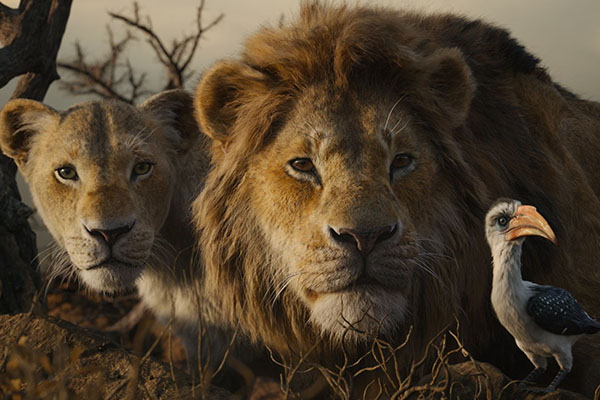 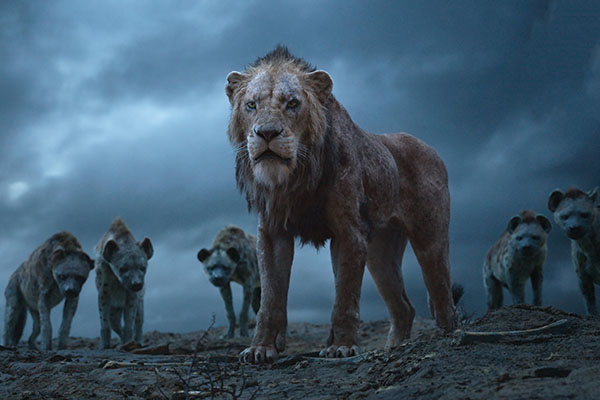 The biggest issue is that the animals all tread this uncanny valley, never able to quite shake how fake they feel. These are characters with lines and emotions but they're made up to look like regular animals, and whether the animators didn't understand how to convey real animal emotions, or didn't want to, just about every character in the film is given a flat and expressionless face throughout the film. Maybe this could have worked if the characters didn't actually "say" their lines, instead having voice over that gave their "thoughts" and that was how they interacted (like the old film The Incredible Journey), but instead the animals that look like animals still "say" their lines with moving mouths. It's so... bizarre. I never got into it.

I know this film made a ton of money and I have to think that's off nostalgia from the original because, watching this film, it's nothing short of a train wreck. The actors voice their characters ably enough, and some of the casting choices were inspired -- not just Rogen and Eichner but also John Oliver as the effete Zazu. When taken from long shots, the film is pretty, and it's amazing what can be done in computers at this point to render a realistic looking reality. But when it comes to the characters -- how they look, how the story treats them, and what the film has to say that's new or fresh -- the film absolutely falls apart. This is a longer, duller, less interesting version of the original film with absolutely nothing new to add or say on the matter. It's The Lion King, but less in all the ways that matter.

Personally, I'm going to just stick to the original. That one still holds up and likely will remain a classic forever. This new film will probably fade from memory in a few years and everyone will go back to the animated original because, frankly, it just looks and feels better in every way that counts.