Don't Turn Your Back

It's hard to argue with a five dollar game. Big games, that cost $30 or more, require a bit of thought -- 30 bucks, especially in the era of COVID and uncertain economic times, is a fair bit of money to part with if a game is garbage. But five bucks? That's cheap. A game only has to provide and hour or two of entertainment to be worth five smackers. Even if it ends up being the kind of game you play twice, set aside, and never think about again, it's not hard to get your money's worth when it's only five dollars. 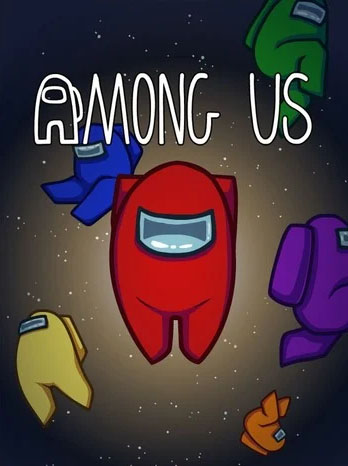 2018's Among Us is the rare cheap game, though, that also provides hours and hours of entertainment. It's not the more original game, all things considered, but it does hit that sweet spot of solid (simple, mind you) game play coupled with the kind of pick up and play cycle that keeps you going, "just one more" over and over into the wee hours of the morning. Even if this game cost more than five bucks it'd still feel like a bit of a steal, but at that sweet spot of cheap and fun, it's hard to argue with this game.

The concept of Among Us isn't really all that fresh: there's a group of astronauts on a ship, but one of them is a traitor. The traitor will slowly pick off he people one, by one,and the rest of the crew has to figure out what's going on (finding the bodies) while, eventually, conferring with each other to determine who the traitor is (and shoot them out an airlock before they kill everyone else). Root out the traitors and the astronauts win. Fail, by letting the traitor(s) have equal numbers to the surviving crew mates, and the game is over.

Honestly, you've probably heard of a game just like this before. I know I've seen party table games played with cards, games like Are You a Werewolf? and Are You the Traitor?, and the mechanics are basically the same here. There are bad guys slowly picking everyone off, and there are good guys eating each other alive to find the bad guys in time. It's a solid mechanic, but nothing I haven't seen before (I nearly wrote a review of Are You a Werewolf back for the first iteration of Asteroid G all the way back in 2009).

But where those other games are basic, no-frills card games, Among Us is a video game with more depth to it play mechanic. The first big change the game makes is by actually having you play your little astronaut as they walk around, performing task. None of the tasks are all that difficult, ranging from basic button pushing affairs to very stripped down mini-game, but that's still more to do than in the card game versions of the concept, where all you do is chat with the other people still alive around the table. That mechanic is here too, every time an emergency meeting is called, but it's just one part of the game. 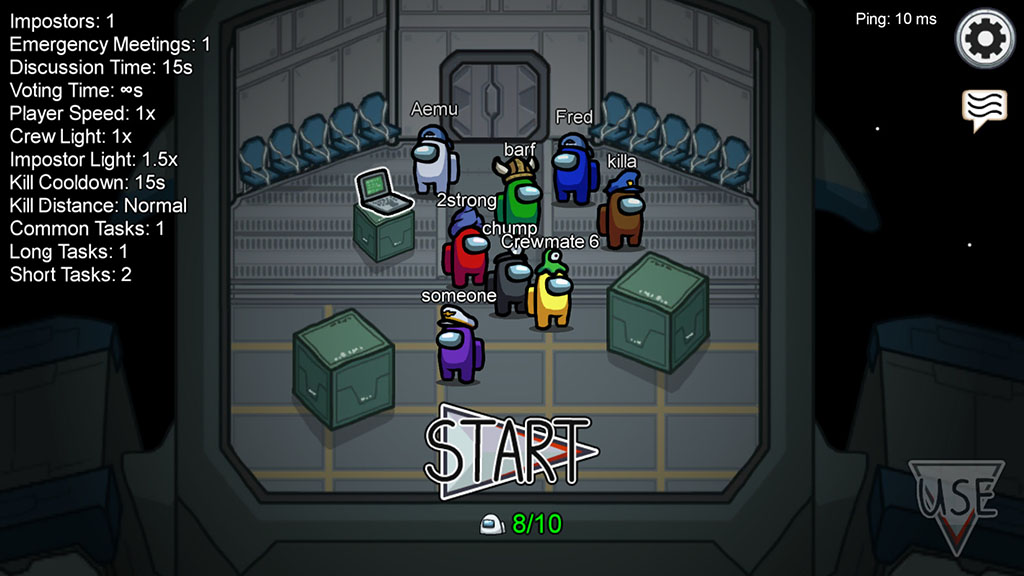 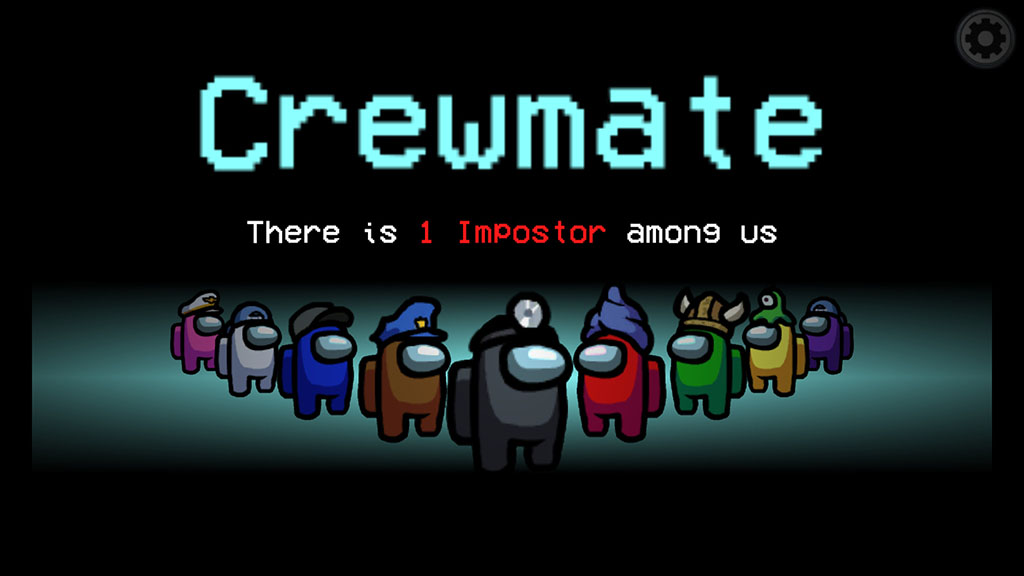 As the traitor (or traitors if you choose to put more than one in the game), you also have things to do. You have to actively kill the other people, which means stalking behind him and stabbing them. You want to do this when other people aren't around, so much of a traitor's time is looking for the right moment, finding someone and getting them along to go in for the kill. You can do this just by walking around, or you can use the vents in the ships to travel around quickly and try to get ahead of everyone else.

You don't want to take too long, though, if you're the traitor since the players can win even without shooting you out an airlock. Those tasks they have to perform add up, and if everyone on the crew finishes their tasks, the crew will win no matter how many of them are left alive. In fact, even after they die their ghosts are still allowed to perform their tasks, so there's a finite amount of time the traitors can waste. Getting the people divided up, killing them off quick, is essential if you want to win the traitorous game.

There is one final mechanic the traitor has: sabotage. frequently (but not all the time) the traitor has access to the sabotage button, which lets them corrupt one mechanism on the ship. Once they do this, the other crew mates have to go and fix it (often with a time limit that could lead to their death if they fail). It's yet another trick that balances the game and gives both sides more to do.

I like the depth of the game's mechanics, but the game isn't without its flaws. The game itself isn't really a looker, frankly, operating a Flash game that got really popular recently (when it was released on Steam). The characters are very simple, and the mini0games and basic tasks aren't anything special to look at. They get the job done, yes, but there's a certain bit of spit and polish I'd like to see that just isn't here in Among Us. 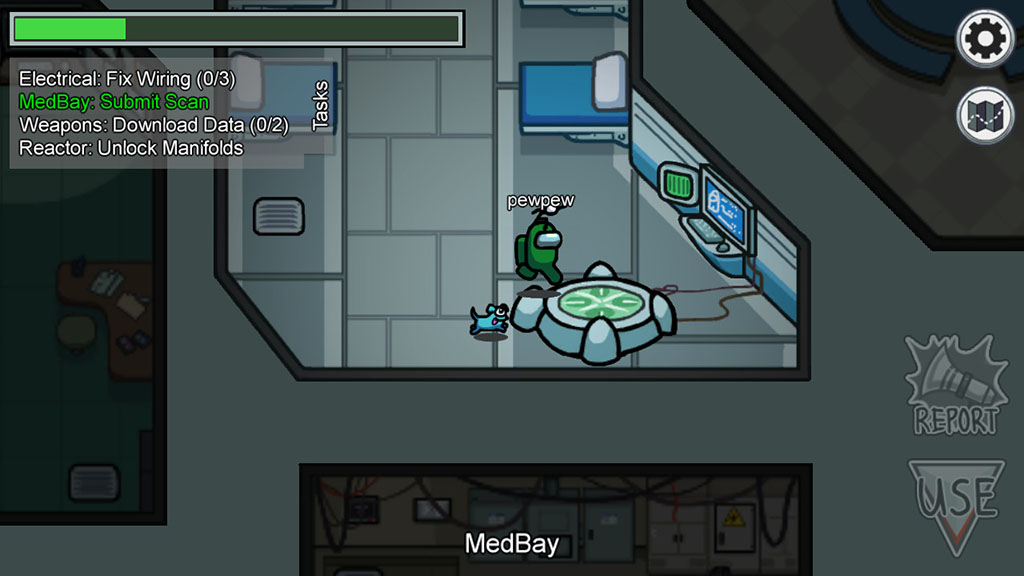 The biggest flaw, by far, though is that the game was never meant to be as popular as it is. Interest in the game flared up in the last month after its Steam release (and announcement of a sequel), and now the servers from developer InnerSloth are absolutely overloaded. Getting into a game, public or private, can take multiple attempts (sometimes ten or more) just to get in, and something even then the game just refuses to let you in. It'll spit out any number of errors, all of which are meaningless basically, and it limits how much fun the game can be when you struggle, over and over, just to get in and play with friends.

Yes, you could play local if you had to, in a kind of LAN-party setup, but who's going to do that in this ear of the Internet? This one flaw really holds the game back from true greatness, and it's doubtful the developers are going to fix it when all their energy is on the upcoming sequel. It's a flaw that, were the game anything more than five bucks, I'd almost find unforgivable. But then I finally get connected and the play is smooth and fun and I forget all my bitching as I play, over and over, for hours.

It's easy to recommend the game based on the price. It's fun, it's cheap, and it has that easy kind of vibe that keeps you coming back over and over. Whole nights will suddenly disappear as you try to survive with your friends (or be the one to kill them all off), and then you'll say, "just one more." So long as you can get in, this game is awesome. Just be prepared for connection issues when you first get Online.

Editor's Note: The game developers later made an announcement that Among Us 2 had been cancelled and, instead, due to the overwhelming support for the first game, all intended features for the sequel would be moved into the original instead. Once that work is complete, and the game has been fully upgraded by the devs, expect a second review for this game.