I am not, traditionally, a fan of war movies. Most films in the genre tend to fall into one of two camps, either glorifying one side over the other as the "patriotic heroes defending goodness and justice" (which, in the heat of war, rarely is that simple or clear), or they dive deep into the horrors of war, spilling blood and tragedy left, right, and center as if they're wallowing in the depravity of it (which might be realistic in a battle -- having never been in the military I'm not going to presume -- but certainly feels gratuitous). I don't care much for movies that glorify patriotism and if I'm going to get a bunch of gore and blood I'd rather see it in a horror flick so I can have more fun with it. 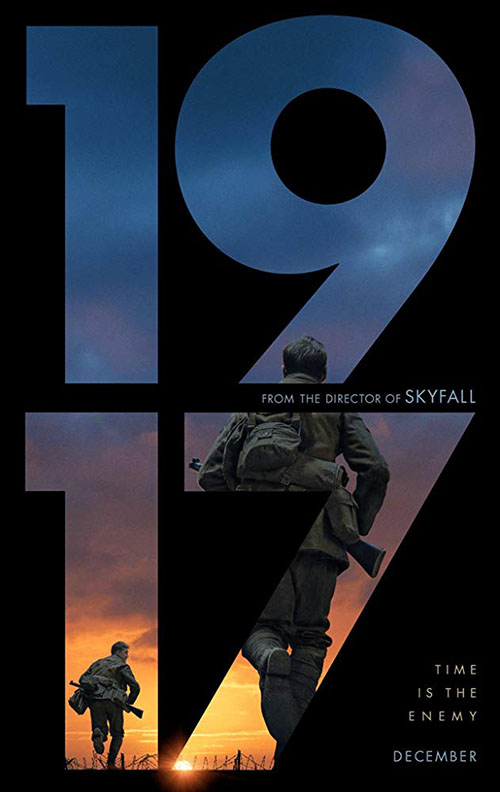 Essentially, 1917 (the new film from Sam Mendes) was an odd fit for me. If not for its filming style I wouldn't have bothered paying any attention to the film as it is, at its core, a pretty basic war movie. But its cinematic convention, that the entire movie is done as "one continuous shot", was enough for me to want to pay attention to it to see how well the filmmaker pulled off that feat. That's the trick of 1917: for anyone that just wants to see a movie done as a single, continuous shot, the film ends up being a very engrossing (if, naturally, quite depressing) film about day during the middle of the Great War.

The film opens with two British soldiers, Lance Corporal Tom Blake (Dean-Charles Chapman) and Lance Corporal Will Schofield (George MacKay), asleep under a tree. Blake is awoken by a commanding officer as the soldier has to meet with a general immediately. He takes one man with him (Schofield, of course), and then two of them go to the meeting where they find out that the front-line army is going to attack the Germans the next day but, unfortunately, British command have just learned its all a trap. Blake and Schofield have to get to the front (where Blake's brother, Lt. Joseph Madden, is serving, just to put a personal connection on it), give Colonel there the General's orders, and stop the attack before too many good men are lost.

From there the entire movie unfolds for out soldiers in (mostly) real time, following them on their two mile (or so) journey across the countryside (which, until recently, was German-occupied), through a bombed out town, as they desperately try to get the front to save the day. If they fail, 1,600 men will lose their lives. If they succeed, well, the war will continue (as WWI didn't end for over another year) but the British won't be completely routed in the process.

Honestly, there really isn't much plot to the film, largely because a film created this way doesn't necessarily allow for it. Instead of a long, sweeping epic about the war, this film narrows down its scope to two men, men who could have a big and immediate impact, to be sure, but that goal is hours off and, in the interim, they basically have themselves to talk to as they dodge German soldiers, German traps, and try not to die. It's a very immediate story, essentially a hang-out movie crossed with a tale of the horrors of war, and it's unlike just about any other war film I've ever seen. 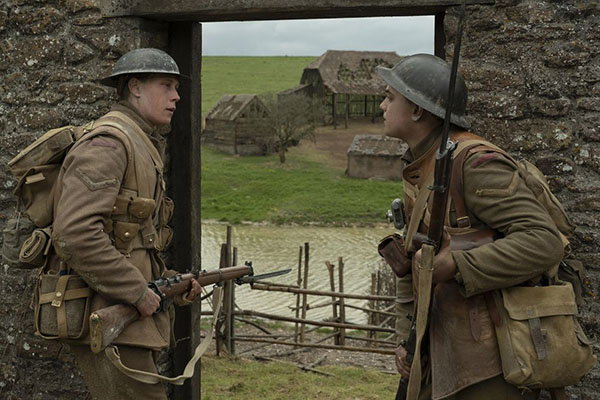 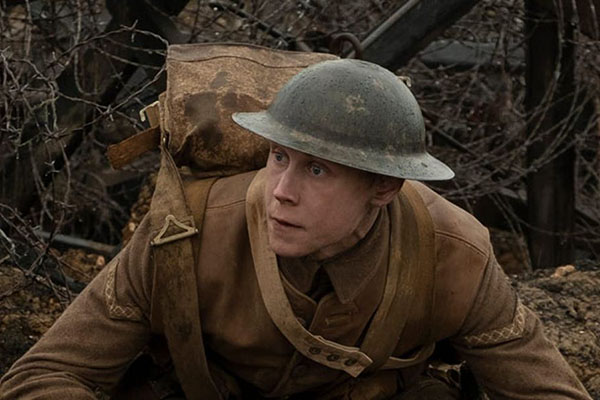 The film is quite unlike any movie I've seen and that's all due to the one-shot style. I've seen one-shots before, long sequences of a movie done as a single, continuous take. There are even other films that have done their entire runtime as a single, continuous take. Most of the time, though, those films do it to be showy. The "one-er" is trick directors like to attempt, something to showcase a cool move in a flashy way. "Look what I can do," they seem to be saying as conversations turn to big explosions, using the one-er to build to a big event before cutting to reactions. It's flashy and showy and damn impressive to do, but the entire time you're watching a one-er you're noticing the movie; a one-er is interesting but it pulls you out of the film in the process.

That's not the case with 1917, though. Sure, at the start I was paying attention to the technique, studying how the cameras were moving, how they seamlessly blended shots to hide cuts. But quickly that faded away and I noticed, almost immediately, that I was getting absorbed into the story, that over time I was losing track of the one-shot quality, that I stopped thinking of the film as a movie. That's the magic of how 1917 implements the technique: it doesn't do it to be showy, to featuring how good the director can stage the movie, but instead uses the one-er to hide the fact you're watching a movie. There are no hard cuts, no whip shots, nothing to say, "I'm a movie". It's both the most theatrical and least theatrical film I think I've ever seen because it wants to hide the fact that it's a movie. 1917 wants you to get so caught up in the story of these soldiers that you forget you're even in a theater at all.

It's not just the staging of the cinematography that works to the film's purpose but also the casting. The two leads, Chapman and MacKay, aren't big Hollywood stars but actors more accustomed to theater and TV (Chapman's biggest role was as Tommen in Game of Thrones and he's all but unrecognizable here). Since you aren't seeing big stars in the lead roles you tend to forget you're seeing movie stars at all; if the film had cast Tom Holland as one of the soldiers, for example, the illusion would have been lost. And, at times, the illusion is lost any time a big star shows up in one of the many bit parts in the movie. While I enjoy Colin Firth, Mark Strong, and Benedict Cumberbatch in other films they are completely distracting here; I would have much preferred if the casting director would have gone with no-names for all the roles as that would have maintained the illusion better.

There's also one glaring cut in the film that completely pulled me out of the film. One of the characters is shot in his helmet and knocked unconscious with the film cutting the black (and then lingering for a little while). For the story this moment makes sense (as it eats up time and forces immediacy on the mission once the character is awoken) but it's such a showy moment, a glaring point where the film shows, "this is a cut, so pay attention". The moment passes and we're quickly absorbed back in, but I remember this shot as much as the quiet elegance of the rest of the film. 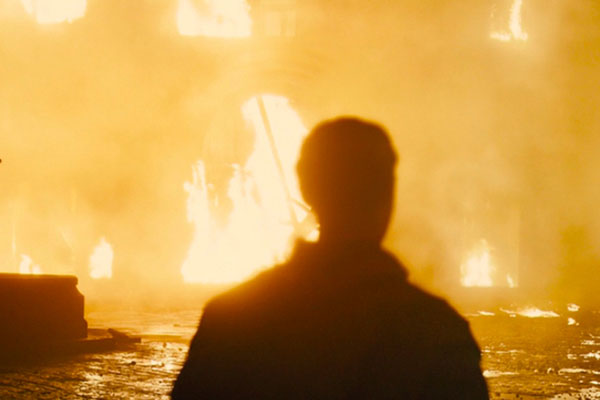 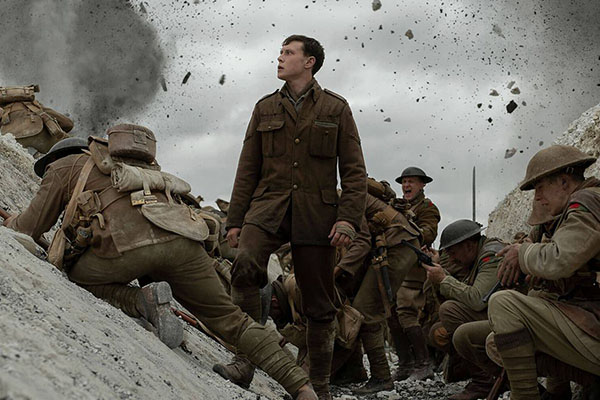 The biggest issue I had with the movie, though, was in the one-sided story itself. We're given two British soldiers as our heroes, soldiers dedicated to saving their fellow Brits. The Germans, though, are never given any kind of fair presentation: the few Germans we do see are faceless characters that are, every time, trying to kill the protagonists. There are so many characters in the movie that are given moments of development, from the other British soldiers and officers to a French woman that one of our heroes meets half-way into the film. The Germans, though, aren't given this same treatment, rendering them as little more than horror movie villains.

While WWII made it easy for us to hate German soldiers in past wars, the fact is that most of the solders on both sides, especially in World War I, were simply doing their duty for King and Country (or Chancellor or whatever the Germans had in 1917). While I don't need a huge amount of story for them, the characters could have been given something to humanize them, at least so that when our hero had to kill them to continue on his mission we would have thought about the horrors of the moment, what pushed him to perform the act and the toll it will take on his conscience.

In fact, the film goes out of it's way to paint the Germans on monsters. Our heroes experience traps from the Germans, things that were meant to kill scores of the British. The few soldiers we meet are blood-thirsty foes, going out of their way to attack the heroes even when the protagonists have tried to save the German soldiers first. There's no nuance to the villains here, nothing to give the film that extra bit of depth. I can certainly understand why a number of critics have complained that within the cinematography 1917 presents a very generic story because it's absolutely true. Without the (not showy yet still showy) technique we basically have a story about our Allies being good patriots against a band of fire-breathing "Huns". It's too simplistic.

Even still, I found myself gripped by the film for much of its runtime and that's all because of the one-shot nature of the piece. The camera work is so good, so well plotted, that it fades away leaving you in the moment with the characters. If Mendes could do this with his dramatic period piece I have to wonder what a different director could do with this kind of technique. If Michael Bay could be forced to sit still, to ditch all his shuddering camera work and quick cuts, I wonder what he could do with a single-continuous take. The kind of action film that could be made this way could be glorious. 1917 is really good, powered by its subtle filming and solid performances from its two leads. If the story had been stronger this film would be absolutely phenomenal. Even still, it's still worth a watch, especially on a big screen so you can get absorbed into the film properly.