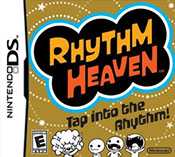 "Tap into the rhythm, and experience a little slice of Rhythm Heaven in the palm of your hand."

And the tag line does Rhythm Heaven, the new DS game from the creative team behind WarioWare, every little bit of justice! A highly entertaining and simple game, you'll complete each addictive, engaging mini-game by tapping, sliding, and flicking your stylus to the beat of the music.

You can imagine the basic look and feel of Rhythm Heaven if you are familiar with WarioWare, because both have purposely low quality graphics and goals that are to be completed through various characters and tasks. Saying the graphics are low-quality is not meant to disparage them. They're interesting and fun to look at, with a kind of pop-art aesthetic. The graphics just aren't the focus of the game -- the game's not really about any of the subjects or characters. By making you do all of these mini-games rhythmically, it becomes a game less about one particular subject, more about just pure rhythm than anything else.

Because the game is rhythm based, the controls need to be dead on. Thankfully Rhythm Heaven accomplishes this. The controls are perfection -- not once did I ever become aggravated and yell, "I totally got that! The game's cheating!" It's smooth and extremely accurate.

Another neat little thing Rhythm Heaven offers is the chance for people that are left-handed to play. Since the DS is held like a book during game play, it would be very awkward to hold it if left-handed. Rhythm Heaven solves this: at the very beginning of the game there's a little tab that says, "Lefty", and to switch back for right-handed, a tab pops up that says "Righty". This literally "flips" the game around and it becomes playable despite hand-writing orientation.

In each mini-game that you play, you are expected to perform various motions using the stylus to keep to the rhythm in each song. Before every stage, there is a tutorial to help you understand what task you must perform as well as adjust to the beat and rhythm of the song. At the end of each stage, you are given a grade: "Superb", "OK", "Just OK" and "Try Again". You then may advance to the next level unless you are given a "Try Again", where you then must replay the level in order to advance to the next. If you receive a "Superb" however, you earn something special: a gold medal! These are accumulative, and can be redeemed for additional stuff such as more, but ungraded, mini-games, endless games, guitar lessons and rhythm toys!

All this however, is to prepare you for the last stage of each set. Each set comes with 4 mini-games where in you complete, and then are faced with the fifth stage. This stage is a remix of the previous four to the tune of a different song. Think of it as the finals after a semester of school work; it combines all the skills you have learned beforehand to complete that last test.

Not only is Rhythm Heaven a fun game, but the music is great to listen to as well. I find myself every so often tapping my finger to the beat of one of the songs. The original score for the game was developed by Tskunku who is a music producer and songwriter. The music is catchy and infectious; from rock 'n roll to 60's surf's up and pop to classical, the musical spectrum is entertaining and just plain awesome.

The game is not without flaw though. Imagine trying to keep in time with the music to make your storks dance (ya, you heard me right), and you need to pause. The only way, as far as I've found, to pause is to hit the start button. Not only does this millisecond of an action mess up your game, but it does throw you off groove. So the only thing I can suggest is to be prepared to never pause during a mini-game; and if you have to, just quit the stage and go back to it later.

The replay value of Rhythm Heaven is very high. The games are fun to play over and over again, and especially with the added bonuses of trying to collect medals and attempting to get "Perfects" on each mini-game. They're an enticing way to get back into the game in order to try and collect the bonus material earned by these medals. These extras help motivate replaying of the game, but honestly, the game itself is enough to want to replay it.

Whether you are saving the planet from invading aliens or playing ping-pong with a robot, this quirky, cute and fun game will keep you entertained for hours.