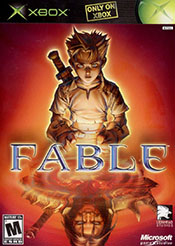 A Hero is Needed... to Earn Money

Fable is a game that's hard for some people to appreciate. That's not a reflection so much on the game itself as much as the hype that surrounded it when it came out (and what everyone expected of the game from all that hype). I remember hearing about Fable for the better part of two years, although I didn't read too much about it. I didn't have an XBox at the time, so to me it was just a cool looking RPG. That was about it.

For those, like me, that didn't pay much attention, Fable was supposed to be the biggest bestest RPG ever -- at least, when it was in development. It was supposed to allow you to do anything. Be any kind of hero you like. Interact realistically with everyone you meet. Journey around with, or against, other heroes, fight epic fights, be cool, and make fondue. Anything was possible -- or, at least, that was what was promised.

Two years later, many of the features got scaled back so they could instead actually release the game before the system it was intended for went off the market. Many of the hyped features were not present. If you read all about it and were excited, that's a big deal -- to not get the game you wanted is a crime many of us have experienced too many times before.

If you were like me, though, you didn't really notice this. For me, Fable is a great game. Not perfect, no, but great indeed. There's a lot to like in the game, such as:

The fighting system is solid. You get a sword, a bow, and magic. You can find other swords and bows, and earn more magic, and use all of it in real time. It's easy to rampage around the countryside with your sword, switch on-the-fly to your bow, get a couple of head-shots in, and then switch back to your sword for more hand-to-hand. The simplicity of the combat makes the game accessible in a way that so many games aren't.

The magic is just as open-ended -- use it anywhere, for any reason (even on townspeople). Even better, as you use your magic (and for that matter your bow and your sword), you gain experience that can be pumped into it (however you like) to make it more powerful. The combat options are deep, and while not endless, it will take you a little while to reach the omnipotent wizard stages of magic.

The graphics are gorgeous, and not just for the era it came out in. The screen, at times, is awash with lush colors. The frame rate is always solid. There's plenty of pretty effects and eye-candy all around in the game. About the only thing I'm not entirely keen on with the graphics are the people, who look at times a little off, especially when they are talking (why hello Mr. Square Face, how are you and your horrendously ugly wife doing today?).

I like the plot, and the fact that you don't always have to pay attention to it. There is some hand-holding when you only have one major quest you can follow, and eventually you do have to take the quest to get better stuff opened up. The game isn't the most linear beast imaginable, which, considering just how linear most RPGs are is nice.

Sadly, some other aspects could have used some work. As far as looking at the game as a potential start to a series, these things can be overlooked in general, although when you consider the original scope, they are kinda depressing.

For starters, there just aren't enough side quests. The game is supposed to be open in style (no GTA sandbox, sure, but still), allowing you to do as you please, when you please. Sadly, you only usually get a quest or two after each major plot point, and then you have to advance the plot again to get the next side quest or two. Add to that the fact that the people you meet around town aren't the deepest of characters. You can have a wife, or a bunch of wives, but they all pretty well act the same. They are just random villagers.

The villagers cause another problem as well. You can be good or evil in the game. Steal or killings are, of course, evil acts. But you really don't feel bad running around killing lame, one-dimensional personalities. It's not like they did anything to make you care about them.

Then couple that with the fact that there doesn't seem to be much penalty for being good or bad. Nothing really different happens, and you can easily go from good to bad with the change of an outfit (some outfits have alignment scores). There is so little in the way of penalty, you can go from saving a village at one moment to killing everyone in it the next.

The game is also rather short -- it won't take more than 25 hours to complete. Its fun, don't get me wrong, and there's things I'd do differently the second time. But, if there was more to it just to do, more quests or a longer main adventure, or more reason to explore and do other non-linear story activities, the game would have a much longer shelf-life.

The game is great. Not prefect, no, but great. So long as you don't think about what the hype promised, you'll have a grand time working your way through to the end.